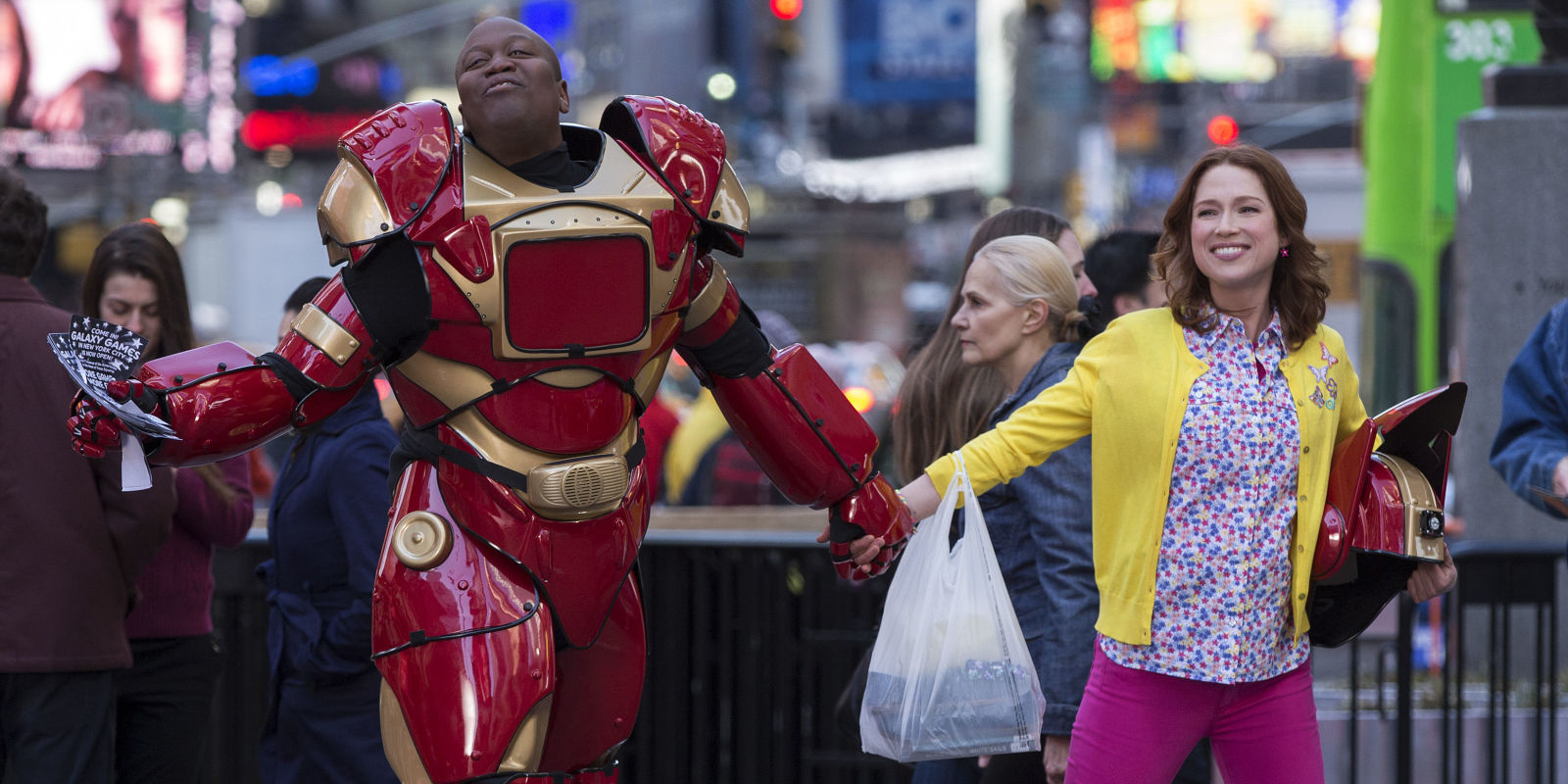 Unbreakable Kimmy Schmidt, the hilarious brainchild of Tina Fey and Robert Carlock, had 20-somethings taking to their couches instead of the clubs and parents sending their kids to bed early after it’s release last Friday.

The show centers around the astonishingly resilient Kimmy Schmidt (Ellie Kemper, The Office), who is rescued after being kept in an underground bunker for 15 years by cult leader Richard Wayne Gary Wayne (Jon Hamm, Mad Men). The Reverend kidnapped Kimmy and three other women, then convinced them world had been destroyed in a nuclear apocalypse.

Kemper portrays Kimmy with an impressive amount of pep and energy. While she has a history for playing upbeat supporting characters, Kemper has never had a show centered around her before. Kimmy has a loud personality that never rests and Kemper keeps up, performing seamlessly. She is truly, and rightfully, the star of the show.

Once rescued, Kimmy and the her “bunker mates” are dubbed the “Indiana mole women” and flown to the set of a New York City talk show to be interviewed about their underground experience. Woefully unprepared, but captivated by the idea of a fresh start and armed with a certain childlike confidence, Kimmy decides to stay in the city and make a life for herself.

It’s in this bold move that we first see that Kimmy is not just a naive victim with a brightly colored wardrobe and self-preserving optimism. She is a bonafide badass, and she takes on the biggest city in America, sans support system, to prove it.

After following a classified ad to a basement apartment that is certainly not up-to-code, Kimmy winds up living with Broadway hopeful turned Ironman face character, Titus (Tituss Burgess, 30 Rock). Their landlord, Lillian (Carol Kane), describes him as “very isolated, but so talented, but disillusioned, but a genius. And single, but very gay.”

Burgess takes on Titus, who is arguably the show’s funniest character, with a magical combination of ease and exaggeration, making him doe-eyed and endearing one moment and side-splittingly hilarious the next. Titus’ up-and-down relationship with Kane’s character, Lillian, is one of the show’s comedic staples. Kane portrays the delusional and hippie-esque landlord with an impressive amount of believability

To afford her new living arrangement, Kimmy must find a job. As fate would have it, Kimmy lands a babysitting gig with the unreasonably demanding and absurdly wealthy socialite Jacqueline Voorhes (Jane Krakowski, 30 Rock) after catching her son stealing candy (for the second time), and returning him to her doorstep.

Krakowski plays the unrealistic and shallow, but surprisingly soft, Jacqueline with a mix of coldness and humanity that makes you want to strategically plant a lego for her to step on, but then promptly wrap her in a giant hug when you see that she really does have a heart.

The rest of the 13-episode season focuses on Kimmy’s mishaps as she transitions into the 21st century, helps Titus reclaim his abandoned dream of singing on Broadway and inspires Jacqueline to take control of her spiraling life after she catches her husband in an affair.

Kimmy takes on everything from automatic faucets to a short-lived love triangle featuring a high-class friend of Jacqueline’s and a working class immigrant from her GED class. Her trademark optimism and resilience is unyielding through it all.

The sitcom is full of witty one-liners and the kind of off-putting humor that only Fey can get away with, like Kimmy’s comment about “weird sex stuff in the bunker” and Titus’ Mississippi education, where he was taught that dinosaurs went extinct “because an asteroid turned them all gay.”

The supporting characters are all but flat and add multiple new dimensions to the show. Titus balances out Kimmy’s optimism with a healthy dose of cynicism, while Lillian meets her ability to face reality with a perpetual aura of delusion and Jacqueline counters her resilience by consistently living on the brink of a nervous breakdown.

Even though Kimmy Schmidt is littered with familiar faces, it is not just the consolation prize 30 Rock fans have been waiting for since the show’s 2013 finale, but a comedic masterpiece sure to create a whole new era of Fey fanatics.

The show was originally made for NBC but moved to Netflix due to the bleak state of the station’s comedy block. It joins Orange is the New Black and House of Cards as another made-for-Netflix masterpiece, putting Fey and Carlock in a position to exercise much more creative license in any subsequent seasons than in the made-for-NBC first season.

Don’t worry if you zipped through all 13 episodes in one sitting – Kimmy Schmidt will definitely be back for a second season. Order in some more Thai food and pour yourself another Riesling because the fun isn’t over yet.

Ashley is a journalist and college student with a passion for justice and informed decision making. When she isn't running the school newspaper or saving the world, she can be found downing energy drinks and tacos to fuel her lifestyle.