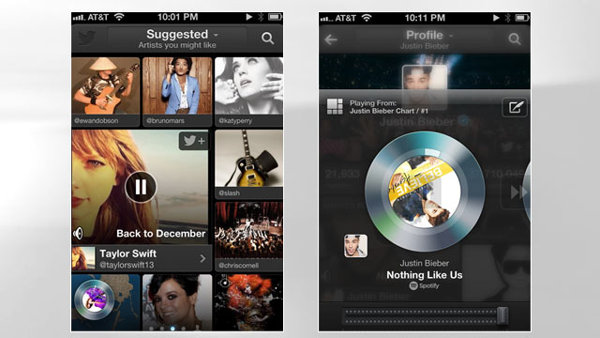 After a round of rumors, Twitter’s new Music service is finally here. Although, it’s not available for everyone just yet, so you will need to be patient. The new Music app will be available for you soon. It will definitely be interesting to watch if the new app lives up to the hype or not.

Twitter Music, as previously reported, allows users to discover new and trending music available on Twitter, depending on the artists you follow. The iPhone app has 4 tabs, which you can browse by swiping left right, reported by Good Morning America. We’re expecting the Android app to be identical to its iOS counterpart.

Each tab offers different music based on your following. The first tab is called “Popular”, this shows what music and songs are trending across the Twitterverse.  The second tab is called “Emerging”, it shows the upcoming artists that are usually hidden in tweets. The third tab is called “Suggested”, and the name pretty much explains it; it shows you music suggestions based on the artists you follow. Lastly, the “#NowPlaying” tab lets you see the music your friends are currently listening to.

So, if any of your friends are listening to a specific song and he/she tweets about it, then the song will show up on the #NowPlaying page and you can easily tap to listen to it as well.

However, there’s a catch, at the moment you can’t listen to full songs unless you’re subscribed to Rdio or Spotify. Song previews are provided by iTunes. Don’t lose your hope if your favorite music streaming service is not supported, because Twitter is working real hard to get as many streaming partners as possible. We hope that they partner up with Xbox Music because that’s definitely one of the mostly used music streaming service available in the market.

Twitter hasn’t invented anything new here, they’re just giving you the simplicity of finding new music and listening to it. If the app is made available for all platforms and works great for the users, then we don’t see any reason why it won’t gather a nice following.

If you’re interested in the app then it is available for iOS only. Android, Blackberry and Windows Phone users will have to wait a bit longer.

Have you tried the new app? Let us know how you feel about it by commenting below.

Donate to Charity with Google’s One Today App