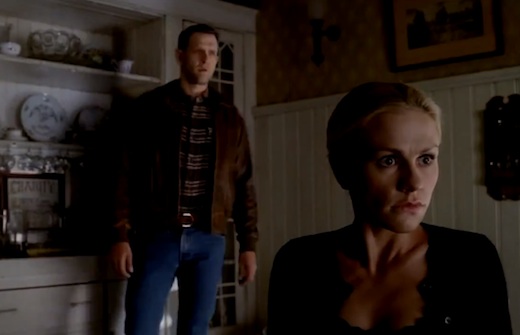 It is entirely possible that the creators of True Blood have finally remembered what made the show so good the first three seasons. Plenty of Lafayette, plenty of Jason doing what Jason does best and actual filling in of back-story. This episode was easily the best episode of the entire season and best of all, it appears that the show set up the next episode in a way that actually makes me want to come back. This is actually the second straight episode that has had a good enough cliffhanger that I find myself looking forward to what is coming up in the rest of the season.

I don’t think it is exactly a coincidence that the episode of True Blood that I liked this week really only had a couple of story-lines going at the same time. One of the things that has made the series go downhill quickly over the last few years is that the writers have tried to keep 15 story-lines going at once. That meant that we spent about 10 minutes a piece on each story per episode and none of the stories were all that captivating. This episode still covered a couple of different story-lines and Sam and Alcide still make up the least interesting of the bunch but the writers seemed to have figured that out. By my count we spent little more than five minutes showing that the story is still going, without focusing on that feud.

The rest of the episode focused mostly on Jason actually getting his head back together and getting in his usual trouble with the ladies. Eric, Pam and the rest of the vampire crew were also very busy being captured by the government and we got to see first hand the facility where captured vamps are being taken. We also got to interact more closely with one of the scientists who is trying to figure out the psyche of the vampires. During a rather long interrogation/therapy session, Pam gives this scientist quite a bit on insight into the inner workings of modern vampires. One major problem arises when the scientist doesn’t quite believe all of what she is claiming and that lack of trust actually leads to one of the two excellent cliffhangers that the show ended with.

As far as Jason and his shenanigans, there truly is nothing better than when he gets involved with one or more ladies in the show. These story lines usually get hilariously crazy and are always entertaining. True Blood fans have been waiting for Sarah Newlin and Jason to get back together since she resurfaced earlier in the year and this was the episode that it all went down. Fans of the show have also been waiting for Jessica and Jason to hook up again and they almost got their wish there as well. The love triangle was not only interesting but was absolutely 100 percent True Blood certified.

Lafayette has long been one of the unsung heroes of Bon Temps and he played a rather critical role in this week’s episode. He is truly at his best when he can wise crack hard and fast and play the moral compass for the other characters who all seem a little changed from their interactions with all things supernatural. His dabbling with the supernatural also left him powerless to help Sookie when she needs help the most and that gives us our second cliffhanger in the episode.

Finally there’s Warlow. After spending much of the season being nothing more than a shallow villain, we finally got to see what really makes him tick. I said last week that the best villains of the show are those who we understand because we see how they became what they are, or at least we saw what they were long before they were the characters introduced to us in the show. Warlow’s story is especially interesting because we find out he’s not nearly as evil as he was billed. The show did a fantastic job in setting up every storyline it covered here as one that we actually want to see continue. That’s a welcome change from the early part of this season that seemed to just be plodding along.