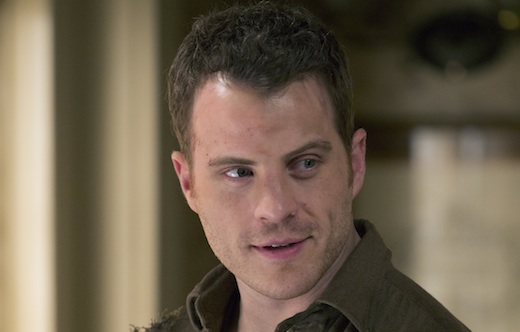 Things are heating up as the season rolls. Just like last week, when I thought the show was finally hitting its stride, this week’s episode was even better than the last. Unfortunately, the show is still a far cry from what it used to be, but at least this episode was interesting and didn’t have any moments that really made me want to cringe. Until Jason went to lick Ben’s neck in a very vivid dream, at least.

Warlow has finally shown himself, and I’ve got to say that the way the show depicted Sookie handling it was about as good as the show has ever done. Sookie has always been portrayed as being a little smarter than she is given credit for but the end of the episode was a rare case of me actually being quite impressed with her character since she wasn’t fooled by her libido despite the fact that Warlow seems to have none of the weaknesses that normal vampires do. He eats food laced with silver iodide and can walk in the sun with nothing happening to him. One has to wonder exactly whether a stake to the heart is going to work.

The Warlow character in general is a bit disappointing if only because we still know almost nothing about his backstory. When Russell Edgington was introduced to us, we learned exactly where he came from and why he was the way he was. The same actually holds true for all the vampires in the show. We’ve seen the backstory of Pam, Eric, Bill and Jessica and we saw quite a bit of Tara’s backstory first hand. The new “big bads” in the Governor and Warlow are both incredibly shallow villains at this point.

We know that Warlow is old and we now know that he is actually distantly related to the Stackhouses. What we don’t know is why he is the way he is, what is in this other world that served as a prison and how he got out. All of that just seems to be stuff we’re not supposed to care about. These kinds of details would have been provided to us if this storyline was going on in the first two or three seasons of the show. Sadly, the shallow characters are coming in steady streams in the last three seasons.

In other storylines that don’t involve Jason, Sookie and Warlow, Jessica and Bill dream up a scheme that gets Andy’s daughters to their house. Said daughters are now teenagers and were out looking for beer when Jessica and Bill round them up. The plan, as was hinted at last episode is to synthesize fairy blood in order to allow all vampires to walk in the sun. Sadly for Bill, he’s informed that the magic properties of the Fae blood breaks down when outside the body.

This leads me to the only part of the episode that annoyed me at all. Jessica attempts to stop the faerie girls from leaving and becomes overcome with desire when they surround her. It appears that she ends up killing all the girls. If this isn’t a misdirect, it appears her killing the girls could set off a bit of a way with Andy who is beside himself trying to find them and ends the episode racing off to an unknown location. It appears he has figured out that Bill and Jessica have the girls. The annoying part is that after Jessica attacks the girls she breaks down screaming and crying. The thought occurred to me that I don’t remember a single episode this season where Jessica isn’t crying about something. I’ve had just about enough emo vampires to last a lifetime.

Add in the side story of the governor’s daughter being turned into a vampire as an act of revenge by Eric and the explanation of just what Sarah Newlin is doing in this season and what she meant by “becoming a politician,” and this episode had enough action to keep the season moving along.

The problem, as has been the case for several years now is that the show has sacrificed story for action. Sam watched Luna die just a couple of days ago in story time and is already making out with a new girl. Jason is just running around being nutty and it appears we’re never really going to learn what was up with his head. He’s just “ok” now. If the show decided to take a breath and actually tell a story the series could be very good again. Instead, it’s just “ok”, as well.