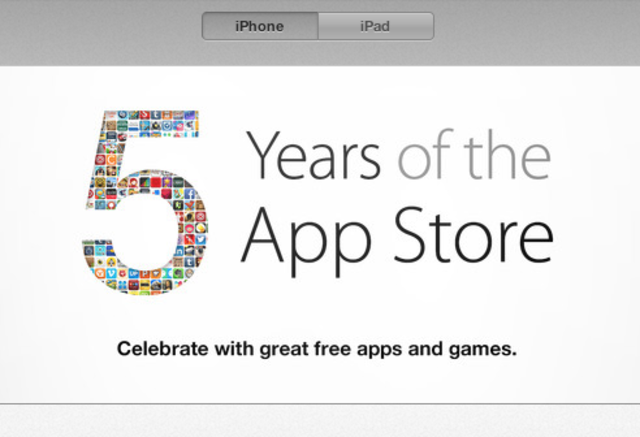 Apple’s App Store is now 5 years old. So how are they celebrating? They’re giving us a host of top-selling apps for free. A wide range of apps – from Games to Educational ones, are available for free download on the App Store right now.

Infinity Blade II, a fighting game with swipe gestures, which previously sold for $6.99, is among the free games on the App Store right now. Other apps, such as Where’s My Water?, Superbrothers: Sword & Sorcery, and Badland too are available for no price.

Barefoot World Atlas, an interactive atlas app 1.13 GB in size, used to sell for $4.99. It is now anoher one of these apps up for free download. Day One, a popular journal app, is also free, cheaper by $4.99

“Barefoot World Atlas went free this morning and will remain so all this week to help celebrate five years of the App Store. Today’s promotion is another step down the road to help spread the word. ” –  CEO Max Whitby, CEO, Touchpress

However, sellers are not being compensated by Apple for any of the loss in revenue.

“In marketing apps you have to consider the big picture. The loss of one week’s paid sales is far outweighed by the wider gain in awareness.”

The App Store recently completed 50 billion downloads this year. During the iOS 7 announcement at the WWDC this year, Tim Cook also announced that Apple had now paid $10 billion to developers so far. Google’s Play Store, which completed its first birthday in March this year, is also running close. It had 48 billion app downloads as of May this year.

Giving out free apps is becoming the norm among stores now. The Play Store too was seen giving away apps and movies at discounts as celebration for its first birthday.

Apple hasn’t made any official announcement of any kind yet, nor do any of the apps have anything mentioned on their pages on the App Store. There is no information on how long this ‘celebration’ will last. Barefoot World Atlas should be staying free for a week, but we can’t say the same for the other apps. So we’d advise you to go pick up your favorite apps as soon as you can.