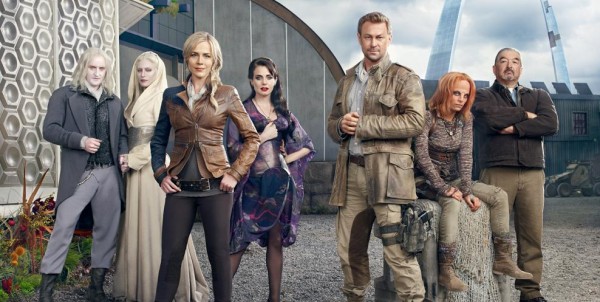 Unless you are watching “Dr. Who,” the chances of your favorite sci-fi/fantasy TV show getting cancelled prematurely are pretty good. I still haven’t gotten over “Firefly” and its short run. Even “Fringe,” which did have a lengthy run, seemed to get the short end of the stick a lot. It’s just the nature of a genre that costs a lot of money to produce and rarely pulls in the number of viewers channels are looking for. Well “Defiance,” which had its season finale this past Monday, has found the work around. Broadcast on the Syfy Channel, “Defiance” doesn’t require the numbers that major networks would. But also being on such a channel, the show is able to commit to high concept science fiction that doesn’t necessarily appeal to the 18-49 demographic that makes shows like “The Voice” so successful.

“Defiance” follows Nolan, a law keeper for the town of Defiance, a future town built where St. Louis once was. The town, occupied by both humans and multiple alien species, is full of prejudicial and political divisions that keep tensions high. Describing the entire backstory and explaining each character would take a long time, but in many ways the shows overall set-up is familiar to sci-fi buffs. Nolan and his adopted daughter Irisa, borrow a great amount from Mal and River from “Firefly.” Then there is the town setup which is reminiscent of “Eureka” or “Terra Nova.” But let’s not be too picky, imitation is the sincerest form of flattery after all.

Season one deals with a number of interesting story arcs that run throughout the twelve episodes. There are mysterious artifacts and murky histories that all seem like they would end epically. Two of the proud families, who happen to hate each other, are joined when the daughter of the human guy marries the son of the Castithan (alien) guy. Irisa is some kind of chosen one or something and has visions. Unfortunately, many of these moments end anti-climactically. The finale does however deliver on the pivotal Defiance mayoral race. The results are more important than I expected.

Each episode has its fair share of awkward scenes. Many of them revolve around the show’s efforts to be sexy. The music choices don’t always fit either. On more than one occasion an intended epic moment is weakened by an out of place acoustic ballad. But other strengths balance out these weaknesses. The digital effects are generally good for a television show and the prosthetics and makeup are very well done. Now I hate to be a stickler, but I can’t unsee the time a character is wearing a Rawlings chest protector for a baseball catcher as armor. The logo is blacked out with marker, but it’s still visible. That’s a rookie mistake. Little signs of budgetary restrictions like this pop up now and then.

One aspect of the show that sets it apart is the “Defiance” video game. I didn’t play it, but the advertisements promise supplemental content that brings you through the season in an alternative way. It’s a cool concept. I’d love to hear if the game is any good from any readers that have played it. The graphics on the commercials don’t look great, but I will reserve judgment.

Syfy has announced the show will return for season 2 in June 2014, so fans have that to look forward to. I’ll definitely tune in because even though the show lacks the quality or depth of something like “Game of Thrones,” it is fun to watch. I’ll look for season two to work some of the kinks out.

Must Have OUYA Apps

Top Apps Available for Free on the App Store