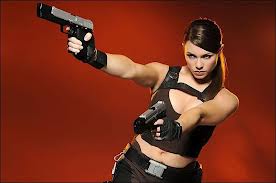 So, you think most gamers are men? Think again! Recently, women have stepped up to the controller and claimed their rightful place as the hardcore gamers that they have worked so hard to become. Now that women have infiltrated an almost all-male culture, ridiculous myths and accusations are abounding. I, for one, can’t take it anymore! So, here is a quick rundown of the Top 5 most ridiculous girl-gamer myths and why they simply are not true.

You’ve likely heard most of these , but we’re going to cover them again and give you plenty of reasons to never EVER say them to your gamer-girlfriend, gamer-wife, or gamer-mom!

1. We only play COD because you do.

A lot of men seem to think that women take part in games simply because they want attention. **News Flash** Do you really think that women are so desperate for your attention that they would force themselves to play a first-person shooter game for hours on end if they didn’t enjoy it? Nope. Don’t flatter yourself.

Sorry, if I wanted to be ‘one of the guys’, I would lay around in my boxers and beg you to make me a sandwich. I play games because I enjoy them, not in a pathetic effort to be like you. This one is especially offensive when used in conjunction with the accusation that women do this to ‘spend time with’ their boyfriends or husbands. If I have to do something I don’t enjoy so that I can spend time with my boyfriend…odds are, he isn’t going to be my boyfriend for very long.

I actually heard some Neanderthal say this a few days ago. What is this? 1665? Should I have to wear a turtleneck and rescind my right to vote, too? Get REAL. If you have ever thought, said, or wanted to say this or anything remotely close to it, it’s time for you to get off the sexist train. Women can, and do, reserve the right to game when they want, and are not bound to enjoying stereotypically ‘womanly’ things (i.e. shopping and gossiping).

4. “Women’s hand eye coordination isn’t as good as a man’s, which makes them worse at gaming.”

What? I’m sorry, I didn’t hear you because I was too busy picking off your player with my AS50 while you were being ridiculous. I can play just as well as a man and I can drive a stick. What NOW, noob?

5. Girl-gamers hate all other girl gamers.

Oh really?  The idea that a girl has to be THE only girl in a group of male-gamers is ridiculous. It is highly likely that , if your girlfriend acts this way, you have bigger problems on your hands then just the way she games. Girl-gamers tend to be isolated, simply because there are not a ton of women who game. If there were, we would probably all get together and leave guy gamers alone. But since there isn’t we’re kind of stuck with you.

There you have it! It may seems a little harsh, but the truth is that myths like this can be very disheartening to girls who actually game for the love of it. Having guys constantly place you in a stereotypical box simply because you are a woman who enjoys gaming is enough to make a girl want to quit altogether. I think that sometimes guys who are offenders of these, don’t even know they are doing it.  All we need, to get past sexism in gaming, is a little sensitivity and they understanding that women are not only capable of loving gaming, they are capable of being as good as, or better, than men.

This article would make sense if you stopped proving your point by putting men in stereotypcial boxes. Do you want to be the pot of the kettle?

I vote kettle! With a Pikachu design!

Sorry if irony bothers you, honey, but it’s the point of the article. Not very fun being in that box, is it?
Also, I believe that would be pot OR kettle.
-Faith

I never claimed ‘research’. If I had, I would have cited the source. This is an editorial written from personal experience.

While gaming is in theory a genderless hobby, in practice it’s not the case and while I agree that male gamers acting as the ‘face’ of the hobby are somewhat to blame, I believe it is the game industry itself that are truly at fault. Games are often created for a white, male, hetrosexual demographic, ignoring everyone else, which is ridiculous considering that the actual gamer demographics are almost 50-50 with regards to at least gender. I just hope you haven’t given up on the entire male species Faith!

Haha! I haven’t. I am just annoyed with the ones who blatantly buy in to it as fact, instead of realizing that maybe, just maybe, someone else could enjoy gaming, too.

Thank you! Nice to know that there are still a few gentlemen left in the gaming world!