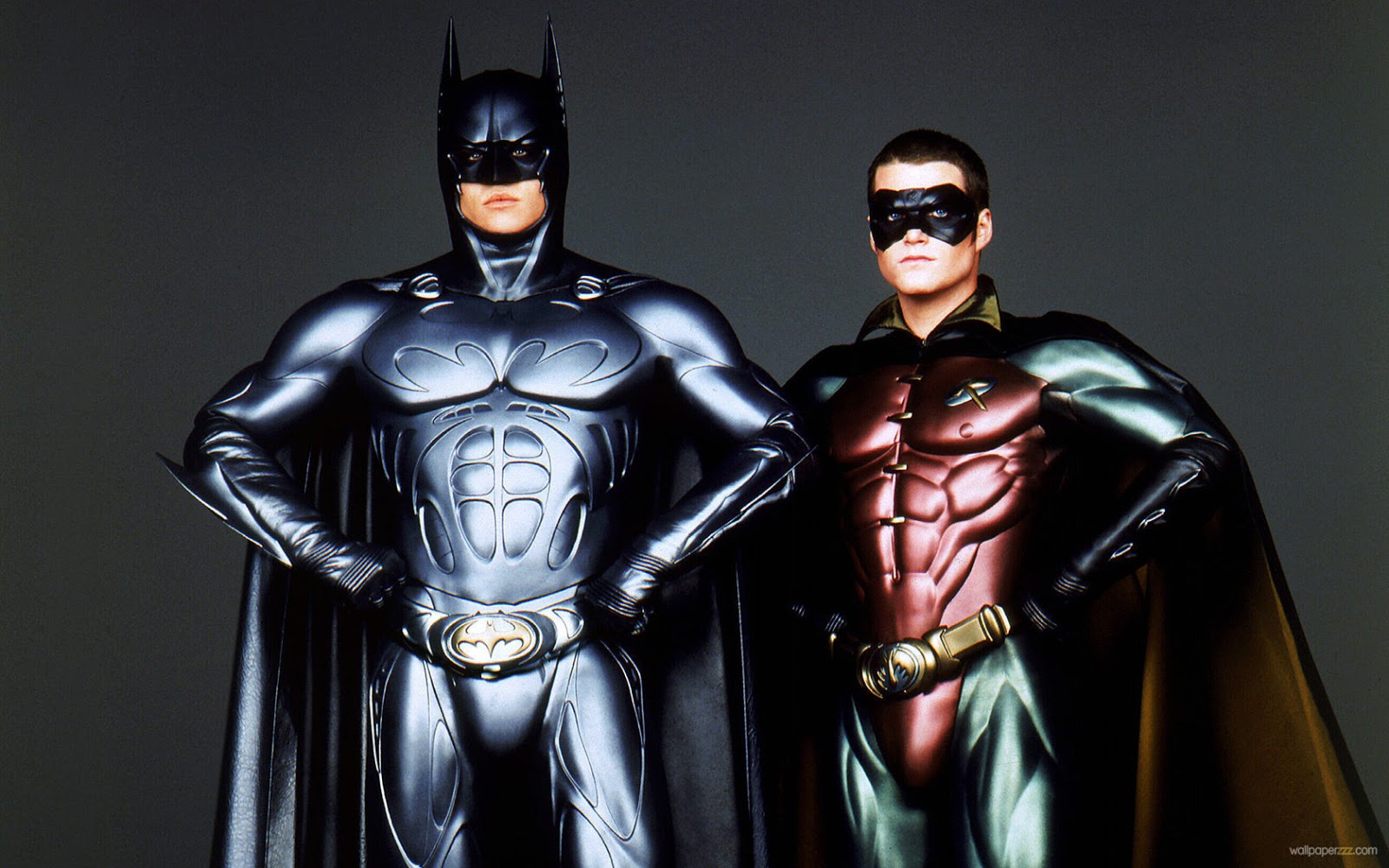 We’ve all experienced the disappointment when our favorite super-heroes FINALLY make it to the big screen…and the adaptation absolutely SUCKS. To a comic fan, this is akin to having all the air drained from our bodies, leaving us empty and listless. Okay, so that’s a tad melodramatic, but you get the idea. Here now (in my opinion, feel free to disagree in the comments) are the top 10 WORST big screen super-hero adaptations.

Batman & Robin (1997): Let’s get this one out-of-the-way early. We had in this cinematic turd: bat-nipples, a bat credit card, campy puns from Mr. Freeze, Mr. Freeze played by Arnold, tin eared dialogue, Batgirl as Alfred’s niece, Poison Ivy as a sixties Adam West style Batman villain, Bane as a brainless mook, and the lack of anything resembling a coherent plot. Not only was this bad, but it left the Batman franchise radioactive for YEARS afterwards. So much has been said about this film that I won’t bother to add too much, except to say that when a film destroys a franchise you know it’s on a different level of bad.

Catwoman (2004): Again, another piece of low hanging fruit, but it has to be mentioned. This misguided movie attempted to completely divorce Catwoman from both the Batman mythos and Selina Kyle, with disastrous results. On the one hand, a Catwoman movie that doesn’t feature batman or have him as part of Selina’s origin COULD work–but it needs to have Selina in it or you can’t really call it Catwoman (even Holly being Catwoman is dependent on Selina existing). By making the title character a new metahuman with mystic cat powers, an original secret identity, and a new villain to fight the film reveals itself as a cynical attempt to use name value to appeal to a wide audiences–thankfully, this piece of kitty litter failed to appeal to comic fans or casual movie goers and was justifiably shunned.

Daredevil (2003): The fight in the playground. That’s all one really has to say, isn’t it? Well, I’m going to say more. While Michael Clarke Duncan makes a decent Kingpin, the rest of the movie is miscast. Ben Affleck COULD have been a good Daredevil, but instead he’s mostly boring and doesn’t have much of a personality. Elektra, in the comics a brutal Greek assassin who falls for Matt Murdoch, is reduced to a manipulated fool who wants revenge on Daredevil. As for Bullseye…gone is the threatening sociopath from the comics and in his place is a generic clown with terrible one-liners. An utter mess. (And no, the director’s cut doesn’t turn this into a good movie.) Hopefully the new TV show avoids these pitfalls.

Elektra (2005): Make a spin-off movie to a failed film? Sure! Why not? What we have here is an extremely watered-down Kill Bill without an interesting plot. Unfortunately, this film also helped give cynical studio executives a reason not to make more female-centric super-hero movies, so despite fans trying (and for the most part succeeding) in forgetting this film, they still remember.

Superman IV: The Quest for Peace (1987): If you know me, you know that I’m a HUGE Superman fan, reading comics featuring the character from numerous decades, enjoying the many adaptations, and thinking about plots that could feature the character. If I could write about any one comic character, it would be Kal-El of Krypton. Which is why it pains me to see him on this list. Why some people might list the bland Superman Returns or Superman III, those films at least had parts that made up for the other defects–this film has almost none. The plot of this movie on the surface is a good idea: How would Superman react to the threat of nuclear war? Somehow this turns into Superman confiscating ALL the world’s nuclear weapons (and getting cheered by every nation!), fighting a nuclear semi-clone with radioactive fingernails, and a boring subplot involving the Daily Planet being bought (also, why didn’t they use Morgan Edge, who clearly inspired the tycoon?). The best one can say about this film is that it was made with the best of intentions–sadly, it turned out to be nuclear disaster.

Green Lantern (2011): I’m also a huge Green Lantern fan, so you can only imagine how hard it was for me to deal with this film. The movie that was supposed to start the Cinematic DCU, and it turned into a bad attempt at aping the style and humor of Marvel’s Iron Man. Miscast in the title role is Ryan Reynolds, but he’s not the problem here. The problem is the first round villain (Hector Hammond), who we feel more sorry for than anything else, Parallax as an evil space cloud (why do these movies love turning cosmic villains into clouds?), a dull romance, and a laughable outcome (Hal defeats Parallax after only being a Lantern for a few days?). Sinestro, unlike everyone else, is wonderfully cast, but doesn’t get to do much (a shame).

Hopefully Hal gets a better shot in the new Cinematic DCU. Fingers crossed.

Ghost Rider (2007): Yes, they let Mark Steven Johnson direct another Marvel movie after Daredevil (WHY?). More miscasting as Nic Cage takes the lead as the title character, and it goes about as well as you’d expect. While he’s incredibly over the top now, I’m actually a fan of Nic Cage and you would think that as a huge comic fan (he named his child “Kal-El”–that’s dedication) he would be good for the part–not so. While I can respect Cage’s desire to play a super-hero, the fact is that he just doesn’t fit the mold of any of the more well-known characters. Now, if we were talking about Nic Cage in 1990 (when Cage was in David Lynch’s Wild at Heart), it might be a different story, but not in 2007. Like Daredevil and Elektra, Ghost Rider continues the trend of unintentionally funny adaptations, with characters stripped of what made them interesting in order to appeal to what executives THINK the public wants to see.

Fantastic Four and Fantastic Four: Rise of the Silver Surfer (2005 & 2007): These two films don’t need separate entries, but consider both to take up two slots on this list. I’m talking about them together because they have almost the same faults: miscasting, bad special effects, no chemistry between the actors (save for Chiklis and Evans), and an uninteresting plot (especially the first). This was the start of the “cosmic entities as space clouds” trope, with beloved villain Galactus getting the treatment this time. The only upside was the design of the Silver Surfer, but he would be pretty hard to mess up. I’m just glad Chris Evans got more a shot at Captain America after this.

Hulk (2003): While there are worst super-hero films, this film seemingly had everything going for: Ang Lee directing, a good cast, and a heavy promotional campaign. So, what went wrong? Quite simply, the film is too swamped in existential angst and bad CGI. That’s not to say a Hulk movie should be free from angst–far from it–but even the TV show had humor and a sense of hope. There’s no way to get around it: the film is dull and boring. Although Nick Nolte shines as Bruce Banner’s dad, he can’t save the film from itself.

no Wolverine Origins or Spider Man 3!?