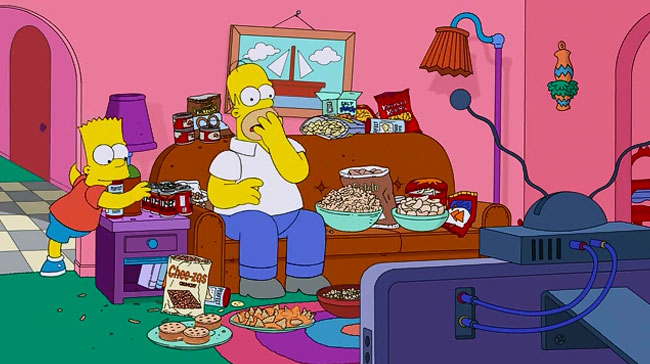 Ay Caramba is right! To celebrate the acquisition of the longest running scripted series in TV history, FXX claimed in April that it will air the longest marathon in TV history when it acquired The Simpsons complete series, which probably left some of you drooling like Homer. One of FXX promos for the upcoming premiere features a post-apocalyptic America where the world has fallen apart as a result of people not being able to do anything else but watch old ‘Simpsons’ episodes. Finally, it was announced on Monday, July 21, exactly when this marathon would run. The marathon will also preclude the launch of FXX’s “Simpson World.” The announcement can only be followed by a simultaneous national “Woo Hoo!!”

After acquiring every last episode of  The Simpsons last fall for $750 million. All 25 seasons and the movie will rebroadcast for 24 hours a day, seven days a week for a full week and a half in chronological order. The movie will air between seasons 18 and 19 just like it was released in theaters. That’s a grand total of 552 episodes and 1 movie over the course of 12 days. The marathon kicks off on August 21 at 10a.m. and will run until 12a.m. on September 1. Unfortunately, the original ‘Simpsons’ clips from “The Tracy Ullman Show” are not currently part of the package. But, FX is talking to Matt Groening about it.

From September 2 FXX will also schedule The Simpsons across their lineup on weekdays and weekends, and will air themed mini-marathons of eight episodes every Sunday from 4p.m., ahead of the shows broadcast on FOX at 8p.m. So, you could watch 8 Sideshow Bob episodes on Sunday if that night’s new episode on FOX features Sideshow Bob. There will be a “Treehouse of Horror” marathon on October 26th.

FXX will launch the “Simpsons World” digital hub in October, which will allow cable subscribers to watch every episode on demand on their desktops/laptops at SimpsonsWorld.com, devices via the FXNow app (iPhone, iPad, Xbox One, Xbox 360, android phones and tablets, and additional devices) and on compatible smart TVs. “Simpson World” has been described the “ultimate ‘Simpsons’ digital experience and provides users everything ‘Simpsons’ fan has ever dreamed of.

Most functionality for ‘”Simpsons World” should be ready for an October launch, and even more should be introduced in January. FXNow does require authentication at least to watch full episodes. However, clips will not require authentication. Currently, FX has deals with about 60% of the country’s providers (AT&T, Cablevision, Comcast, Cox, and Times-Warner) and is very confident of closing deals for the remaining 40% in the next year or so.

The world record for the longest continuous television viewing, is held by a pair of California residents who watched 86 hours and 37 minutes of Springfield’s favorite yellow family. It seems like FX is certainly challenge everyone to break that record. Do you have what it takes to watch every episode of The Simpsons in a row? Only way to find it is to tune in on August 21.