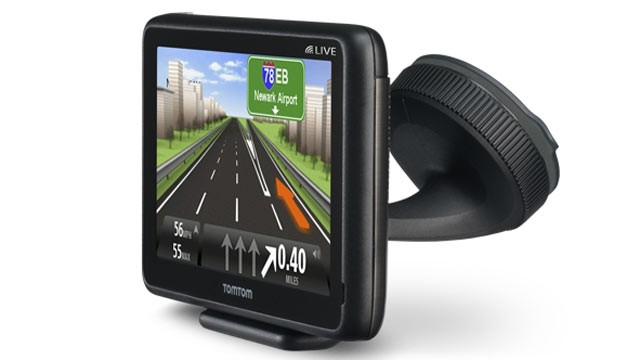 Recently,  I had the pleasure of driving over 500 miles to NYC to cover the Samsung event taking place in the city. I thought it would be a great opportunity to review a GPS unit, as I would have plenty of time (miles, traffic jams, pit stops, exits, toll booths and HOV lanes) to test it out properly. The generous folks over at TomTom rushed over the ‘TomTom GO 2535M Live’ in time for me to use on the trip. Prior to this, I had been using an old (like, 2004 old) GPS unit that needed updates…badly. So, naturally, I was excited to give this high-end unit a test drive.

What’s In The Box

The TomTom GO 2535M LIVE is a complete package of high-end features that are essential for the frequent traveler.

EasyPort mount- While you may not base your final purchasing decision on what kind of mount the GPS unit in question has, I wouldn’t blame you if you did. There is not much worse than trying to shove your GPS on to its mount, in the dark, while rolling down the interstate at 75mph. You can forget trying to plug the power cable in with one hand and then there’s that ‘suction-cup-meets-dirty-windshield-paradox’ that always makes you think it’s going to stick for good, right before your unit splashes down in your Starbucks. Having dealt, personally, with all of those issues, I was really ecstatic when I realized how ridiculously simple the ‘EasyPort’ mount was to use. Initially, upon first use, the owner would adhere the ‘adhesive disc’ to their windshield. It provides a clean, suction cup friendly place to mount your GPS. Not to mention, if placed correctly, the unit will be in the perfect place every time, without having to place and replace the suction cup.  Once the suction cup is adhered to the disc, its smooth sailing. The magnet system that the geniuses at TomTom have used in the EasyPort allow for a 2-second mount that is secure and easy to dismount. It basically mounts itself with its own magnetic force.

Real-time Traffic Updates- Anyone who lives even remotely close to a metropolitan area knows that the shortest route isn’t always the fastest route when it comes to dealing with high-traffic areas. I am from a relatively small town, but as I made my way toward NYC on my review trip, I quickly realized the importance of the ‘Real-Time Traffic Updates’ feature. There were four instances on my trip to and from NYC that TomTom interjected by saying “The traffic delay on the current route is 30 minutes, would you like to take a faster route?” Why yes! Yes I would. The unit gracefully rerouted me without missing a beat and I never came upon even a semblance of traffic in over 1000 miles of round-trip travel. I have made this trip on multiple occasions in the past and, honestly, I have always run into at least one instance of traffic and I was thrilled to have shaved over an hour off of my normal travel time on this trip.

Voice Recognition- As a general rule, I am not a huge fan of voice recognition. I hate talking to Siri, mostly because I feel stupid doing it. When I saw that the TomTom GO 2535M LIVE had a voice recognition feature, I sort of cringed. Was this going to involve me getting rerouted to nowhere-land because the unit didn’t understand me correctly? Thankfully, this was not the case. The unit came with a little card that lists all of the specific commands that it understands. I found the most convenient ones to be: “Repeat Instruction” and “Navigate to Nearest Gas Station”. The latter was especially useful, because I loathe having to make a decision on which exit to take to fuel up. It was much more convenient to tap the little microphone and speak the command when I realized that I was low on gas.  The former was useful because I am usually too distracted by my music ( other cars, my lack of gasoline, passing cows, etc..) to have actually heard the instructions the first time around.

Advanced Lane Guidance- If you aren’t used to driving on metro-area interstates, then this feature is for you! Knowing when to take an exit can be a tricky task. When you throw in a 6 lane highway with three lanes exiting, it gets even trickier. The ‘Advanced Lane Guidance’ feature helps prepare you for a complicated exit or junction by showing an on-screen diagram of which lane you need to be in, well in advance of the exit (see the photo above). Below the graphic of the lanes are a row of arrows that also represent the highway lanes. The exiting lane arrows are slanted in the direction of the exit, showing how many lanes are actually exiting.

LIVE Internet Connectivity- TomTom Go 2535M LIVE features LIVE internet connectivity (hence the name) in order to support some of its other features such as gas prices, local weather forecasts, and of course the aforementioned traffic updates. The best part, however, is the ‘Google Local Search’ option. It allows you to search for local businesses and destinations directly from the TomTom unit and is completely integrated so that a route can be planned by simply choosing a search result. This feature is extremely convenient when you don’t want to rifle through the POI index. All of these features are available without paying for connectivity and with zero ads to speak of. The only thing that the LIVE connection doesn’t do is update your maps. Why? I don’t know. Other high-end GPS units have had this feature for a while, and although it isn’t used very often, it is extremely convenient to do away with the connector cable and the hassle when updates are necessary. If TomTom could make this happen for the GO 2535M LIVE, it would truly be the perfect storm of GPS units.

As stated in the specs, the TomTom Go 2535M LIVE measures 3.5 by 5.6 by 0.7 inches and weighs 9.2 ounces. The body of the unit is made up of a glass display and black scratch-resistant plastic. The back of the unit also features a ‘metal’ panel that houses the speaker and acts as a functional part of the magnetic EasyPort operation. I personally think the metal adds a sleek modern feel to the overall look of the unit that you don’t see very often. The TomTom logo is present on the front and back sides of the unit and the LIVE internet connectivity symbol has been placed in the top right corner on the display.

When compared to several other high-end GPS models, the TomTom Go 2535M LIVE is slightly thicker and heftier. The difference is only marginal and weight/thickness is not really a critical issue for a device that isn’t being carried around in your pocket, however, it is still interesting to note.

The 5-inch screen, coupled with the 480 x 272 pixel resolution, makes for a easy to use and spacious display. I found the touch-screen to be very sensitive and the UI had virtually no lag to speak of.

When it comes to choosing a GPS unit, I am usually too picky to decide on anything. It isn’t because I am hard to please, I am just a big fan of simplicity and meshing simplicity with a device that has as many features as a good GPS does, is a difficult task at best. I was very pleasantly surprised at the ease of use of the TomTom GO 2535M LIVE user interface. I never had to wonder where a certain feature was or how to get to it. Right out of the box, I was able to navigate through the different screens with no problems. Entering and saving addresses is a breeze and the POI index is very simple (so simple, in fact, that it saved me from missing the Tarrytown train into Grand Central), as well.

Although the GO 2535M LIVE does not have 3D mapping, I found the standard ‘ray-traced’ map to be clean, simple and colorful. The color scheme was easy to look at and read in both day and night settings and, with the help of the Advanced Lane Guidance feature, everything was clearly labeled and a no-brainer to understand. While the lack of 3D terrain mapping might be a deal breaker for those who are looking for cutting edge technology, I would not let the lack thereof deter me from purchasing this unit if I were a consumer.

The sound and voice quality on this GPS unit were clear and robust. I never experienced any trouble understanding the vocal commands and the volume level was very customizable, ranging from almost silent all the way up to startling. The ‘Spoken Street Names’ feature was very helpful and accurate with virtually no mispronunciations.

There is nothing worse than taking a wrong exit by mistake and having your GPS unit try and reroute – for 3 long minutes. Meanwhile, you’re having that mini heart attack that ensues when you suddenly realize that you have no idea where you are. Having to pull over and wait for a reroute is nonsense and my old (old old) GPS unit did it to me every time. This time, however, when I was forced to take a detour, the TomTom GO 2535M LIVE locked on and rerouted in less than 5 seconds.

At the closure of my trip, I was happy to tell my colleagues (who knew I was reviewing the device) that I had a great trip with no navigational issues and that I was more than pleased with the ease of my journey.

In all, I would highly recommend this unit. The benefits heavily outweigh the cons and using the device was nothing less than a pleasant experience for my entire 1000 mile round-trip. With an MSRP of $349.00, it is certainly a high-end device, but in my opinion, it is worth the investment. TomTom continues to develop and produce high-quality, functional products that any frequent traveler would be lucky to own.