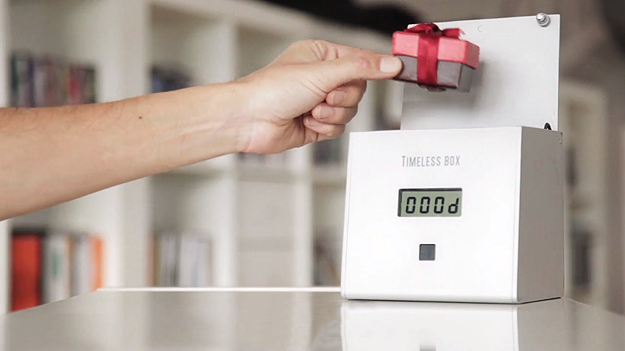 The suspense of waiting to open up gifts until Christmas morning may as well be classified as cruel and unusual punishment. Every day you wake up to that unwrapped gift and have this uncontrollable urge to tear it apart. This Christmas, creative agency Honest&Smile is giving  the opportunity to give the gift of suspense and frustration. 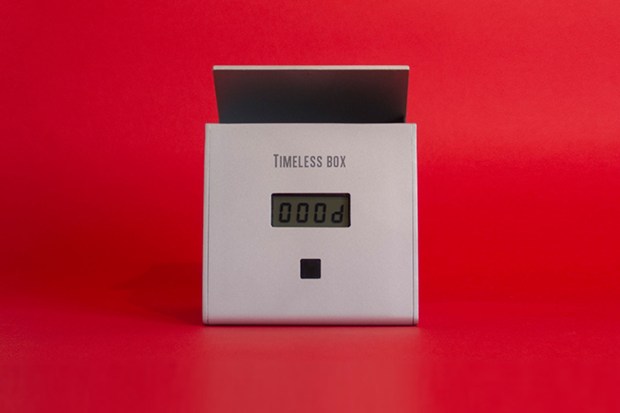 Timeless Box: Putting Anxiety Back in the Holidays

Ignasi Giró, founder of Honest&Smile, has created a “time-machine for gifts and emotions” called the Timeless Box. This box allows you to give the gift of anticipation this holiday season and thwart those friends and relatives infamous for sneaking a peek at their gifts before Christmas.

“We imagine people will not use it for ‘regular gifts’, but for special stuff, such as personal messages, wedding proposals, family memories, rings, watches, legacies… The size has been optimized for these kind of things,” Giró told wired.co.uk.

To use the Timeless Box, simply put your gift inside, lock the box, set the timer for up to 999 days and send it off. When time runs out, the box will pop open and the gift will be revealed. Side effects of receiving this box may include anxiety attacks and extreme frustration.

Giró refers to it as the “anti-gadget” because as a society, we are used to getting products and information immediately after we ask for them. With the Timeless Box, you have to wait to receive what’s inside.

“In such an ‘I-want-it-now’ society, we wanted to create a sort of anti-gadget that removed almost all power from its users, but gave back something precious,” Giró said.

Honest&Smile is a creative agency based in Barcelona, Spain. It is best known for communicating messages and ideas through products. One of the agency’s inventions is called The Love Box. It began as a documentary about love and evolved into a product. It consists of a wooden box with a sliding mirror and a groove to place an iPhone. The device allows you to use both the front and the back camera so that two different videos are mixed on one screen.

The agency also conducts campaigns around Spain with the pure objective to make people smile. One example is “This Gift Ain’t Yours.” The members of Honest&Smile bought 500 USB drives and put a URL on each: “ThisGiftAintYours.com.” They filled the site with digital gifts like songs or photos. Whoever received the USB drive was to keep one gift on the website, add something of his/her own and pass the drive along to someone else. Honest&Smile tracked each USB stick and found that they circulated not only throughout Spain, but also all around the world.

This holiday season when you’re looking for gifts to give, take a tip from the people of Honest&Smile. Whether you want to torture them with the Timeless Box gift safe or make them smile with something simple like a video or a song, at the end of the day, it’s not the gift that matters but the love behind it that counts.