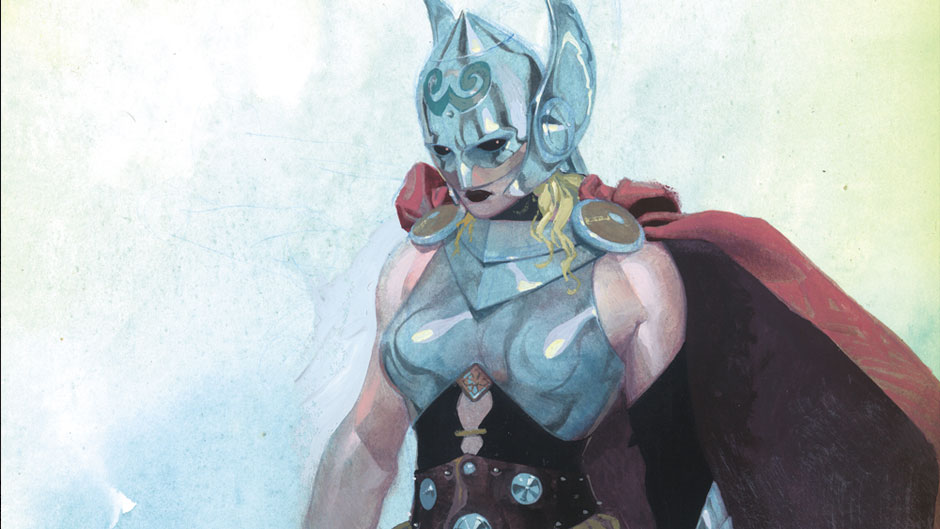 Followers of the Nordic world must have already heard the latest news but for those who haven’t, Marvel, in a very pleasantly surprising public broadcast, has revealed that they will be introducing the first ever female Thor character in their upcoming comic book series.

As announced on ABC’s talk show The View, the new storyline will be launched in October and will feature the mighty Uru hammer-wielding god in a never before seen female avatar. Titled “THOR,” this series is being written by Jason Aaron, who also authored the previous “Thor: God of Thunder, Original Sin” series, with special artwork from Russell Dauterman. A part of Marvel’s new “feminist” collection, this will be Marvel’s eighth comic series that has a strong and significant female character as a protagonist in the Marvel Universe.

“The inscription on Thor’s hammer reads ‘Whosoever holds this hammer, if HE be worthy, shall possess the power of Thor.’ Well it’s time to update that inscription. The new Thor continues Marvel’s proud tradition of strong female characters like Captain Marvel, Storm, Black Widow and more. And this new Thor isn’t a temporary female substitute – she’s now the one and only Thor…!”

So who is this female Thor? Is it Jane Foster? Angela? Or is it Valkyrie? Marvel loyals will know that the popular comic book character ‘Thor’ was created by Stan Lee, Larry Lieber, and Jason Kirby in 1962. Modeled after the God of Thunder from Norse mythology, he has been traditionally male since and naturally, after hearing the news, fans are now confused. Contrary to open speculation though, neither is this character Thor’s sister or lover, nor is she an Asgardian goddess. And while details on the identity of Thor are still sparse, officials have reported that this Thor was once “saved” by her predecessor and now, as the true possessor of the enchanted hammer Mjolnir, has taken up the original’s name and powers. “This is not She-Thor. This is not Lady Thor. This is not Thorita. This is Thor. This is the Thor of the Marvel Universe. But it’s unlike any Thor we’ve ever seen before,” stressed Jason Aaron, the series author.

Somewhat jokingly, male members of the geek-nerd communities have been calling outrage, claiming the re-conceptualization to be a violation of male privilege, pride, and prowess. In an interview with Time magazine, Aaron continues,

“At one point Thor was a frog. So I think if we can accept Thor as a frog and a horse-faced alien, we should be able to accept a woman being able to pick up that hammer and wield it for a while, which surprisingly we’ve never really seen before.”

But it make sense that a lot of Thor fans are having trouble wrapping their heads around this idea, if not the concept then the at least the sequence of events that brought about this transition.  “He was Thor before he got Mjolnir…why will Thor no longer be Thor?” they ask.  To them, Moss replies that once the story is out, “it becomes clear why there’s a new female Thor. It’s not about filling a certain quota.”

Of course, while most of the fandom is anxiously awaiting more news on these developments, there are still many out there who seem to believe that the  sole reason for getting excited over the news is the prospect – or excuse – of getting to see more scantily-clad female characters. In a public fan forum site yours truly stumbled upon this morning, a very invested commenter wrote, “This is the only female Thor I need.” Accompanying his insight was this cosplay picture:

I wasn’t surprised. After all, while strong female superheroes might not have always been the norm, the comic book world has never had a shortage of voluptuous heroines standing in the sidelines in their tight-fitted clothing. Growing up with both Barbie and Jean Grey, I still can’t find much difference between them; slim, beautiful, with perfect face, figure, and hair – they were both ideals for girls to achieve and men to lust after.

But Marvel claims that this is what they’re trying to fix. The new Thor is supposed to be addressed to a newer demographic of female comic book readers and who knows, maybe these new female superheroes really are the empowering role models that our young girls need. If not, we can always appreciate the thought and inclusion. Marvel says we’re getting our new female Thor because the original Thor “is no longer worthy” of the Mjolnir and is “unable to pick up the hammer.” Obviously, then, new Thor?  She’s a force to be reckoned with!