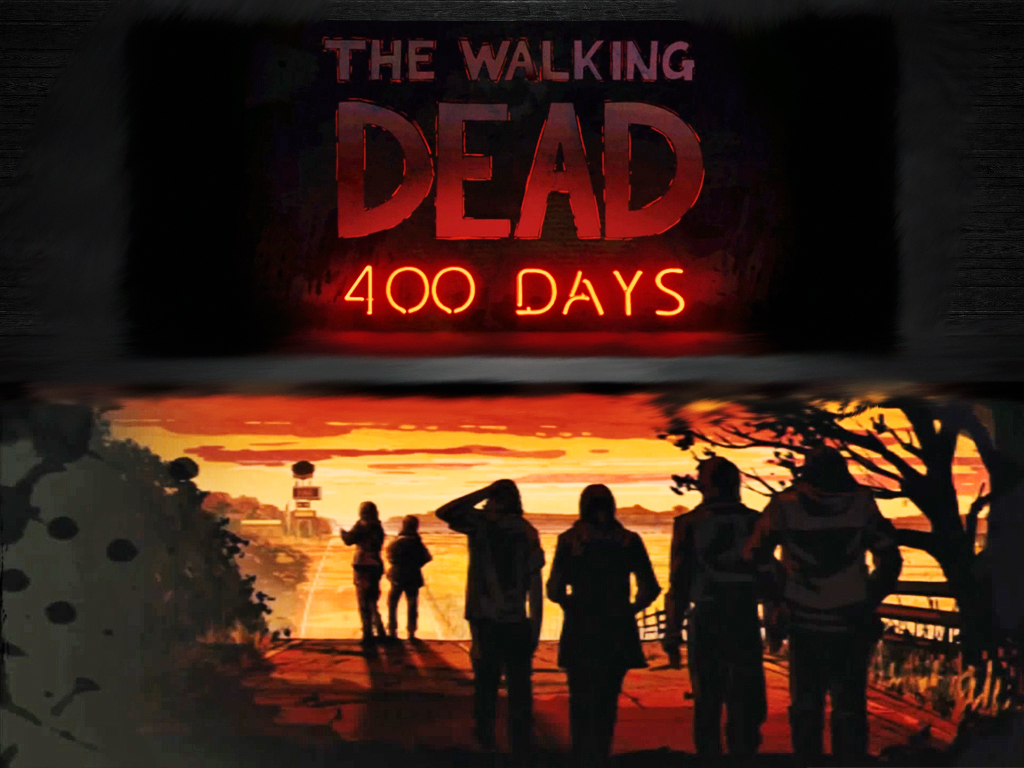 After playing The Walking Dead: The Game and waiting for the agonizing months to pass until the show returns, I heartily welcome anything related to The Walking Dead universe and storylines.  Telltale Games’ 400 Days attempts to bridge the gap, providing a collection of short stories that could potentially give us a glimpse of what to expect in the second season of the game.

The game begins with a bulletin board filled with pictures of the missing and postings from the hopeful, looking to be reunited with their loved ones amidst the chaos.  Five particular pictures introduce the different characters.  Each character gets a mini-chapter that demonstrates particular survival moments and their experiences in various stages of the apocalypse.  The mini-chapters span over a period of (you guessed it!) 400 days, and they can be played in any order you wish.  There is also a short epilogue at the end of the game that ties the individual stories together.

400 Days looks and plays exactly like the first season of The Walking Dead: The Game.  You must decide how your character interacts with his/her surroundings and how he/she handles the “walking obstacles” that present themselves.  Once again, you are pressed to make between-a-rock-and-a-hard-place decisions that have varying degrees of consequences.  The difference is that in this game, each mini-chapter ends in a cliffhanger, leaving you wondering what those consequences actually are.

But it is precisely that concept that makes 400 Days weaker than its predecessor.  In its entirety, 400 Days is about the length of a single episode from season one of The Walking Dead: The Game.  In that game, each chapter requires at least two hours to complete.  Being able to control Lee throughout the story allows you to become emotionally invested in him and the relationships he develops along the way.  You really come to be that character. As a result, your conversations, actions, and decisions have higher stakes and more emotional weight when things go wrong.  In 400 Days, you have about 20 minutes with each character.  It is very hard to become emotionally attached to these characters in such a short time, and without an immediate resolution to the tough decisions they make, you are left feeling rather apathetic to these character’s plights.

The five characters are certainly an eclectic mix, however.  There is Vince, a young man off to prison after killing someone to protect his brother. Then there is Wyatt, a guy escaping from a psychopath with his friend, Eddie. Shel is a woman with her young sister trying to survive in a truck-stop community. Russell, a young boy who is trying to reach his grandmother and Bonnie, an ex-drug addict being helped by an elderly couple.  The writers were able to create intriguing and memorable characters in The Walking Dead: The Game, but in 400 Days, the mini-chapter are so short that you really just get a snapshot of these characters’ lives.

With the exception of Shel’s story (which is by far the best of the bunch), the character development is simplistic and doesn’t create that same level of storytelling you have come to expect.  Each story are compelling in their own right and worth experiencing, however, there isn’t enough time to become fully invested in the characters. Unfortunately, dramatic tension is never really achieved.

It is also hard to determine how or if these characters have any connection to the characters and events from season one or the upcoming season two.  There are allusions to some minor characters from season one, but that is it.  Granted, information regarding season two has been minimal, but 400 Days was meant to be a small taste of things to come, and I’m still wondering what will happen next.  The epilogue attempts to bridge the individual stories into something cohesive, but you’re left feeling short-changed.  It almost feels forced, and I hope that season two will give more explanation as to how these stories came together.

As the old saying goes, “Always leave them wanting more”, 400 Days embraces this mantra and leaves me highly anticipating the second season.  The production is just as good as The Walking Dead: The Game and it certainly looks and feels like an appropriate interlude between the seasons.  I just hope season two can flesh out these new characters and make their stories as compelling as Lee and Clementine’s saga.