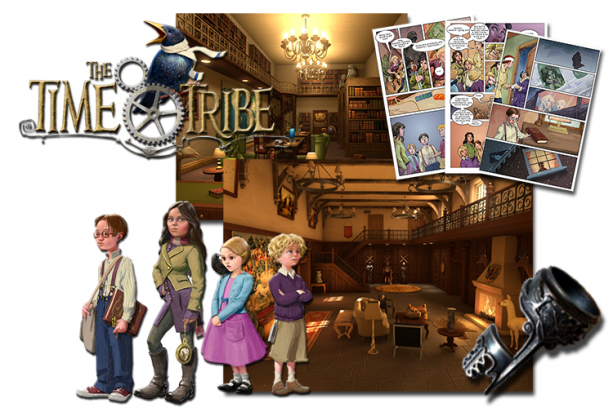 Thundersnow Media’s new freemiun online game, The Time Tribe, tells the story of four children who discover they are part of a secret society of time travelers. They — and the player — will have many time zones to explore and mysteries to solve. Time Tribe can be viewed as an edu game, a wonderful and often overlooked segment of game development.The game’s story takes players to different historical time periods, with historical accuracy, although the focus is on puzzles and character interactions, not on memorizing historical data.

Players of Time Tribe use a familiar point-and-click interface, performing basic actions like talking to NPCs, examining objects, and collecting items. The Time Tribe looks and feels like an old fashioned adventure game, and in adventure games, I’m conditioned to take every thing that’s not nailed down. I did encounter some frustrating lag, which reminded me I was playing a browser game,  but the game is in beta so I won’t be too harsh about that. (If you would like to read a rant on online connections ruining gameplay, might I direct you to any of the million editorials discussing EA’s recent SimCity release?)

While the online game is free to play, users can purchase additional missions and other extras in game, or pay for a premium subscription to receive a monthly mailed package of additional stories and offline activities. Time Tribe’s CEO, Dr. Karen Wherner is a teacher and historian, with a background in archaeology, and my Time Tribe packet really showed the game’s historical grounding. The package included really delightful letters from game characters and other primary sources. When read together, all these short first-person accounts make up a coherent narrative about the children discovering the secret Time Tribe. The game’s aimed at 8- to 12-year-olds, and for kids, it’s an engaging object lesson in inferring from a text. With character-driven action and hints at a lot of mystery, it’s much more effective than just exhorting students to read critically. 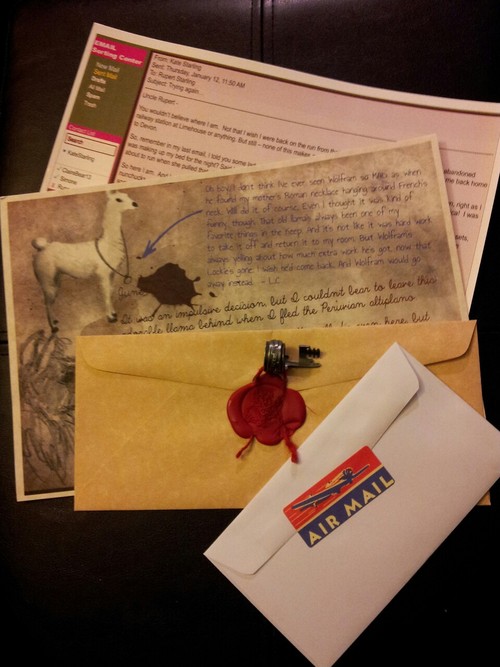 Time Tribe has recently partnered with The Harry Potter Alliance, a non-profit that uses the Harry Potter world as the starting point for social action towards human rights and equality. Because Dumbledore’s Army is real. (So apparently there’s a charity that uses Harry Potter for tangible good. I don’t know about you, but I feel like I’ve been wasting a lot of time by not fighting dark magic.) The Harry Potter Alliance has successfully raised over $123,000 in aid to Haiti, collected books for a charter school in Brooklyn’s Bedford-Stuyvesant and in Mississippi; and made calls for marriage equality in Massachusetts. They also practice wizard dueling in the Room of Requirement on Thursdays after Potions.

The new initiate will facilitate donations from players of Time Tribe through to the Harry Potter Alliance’s programs. Players can use the Charity Portal to spend in-game Gilders on donations, in connection with Time Tribe’s characters and story.  Players use game currency to make donations and receive game rewards for their donation, allowing Time Tribe players to take real-world action for social change, with a tangible reward for these actions.

I wrote recently on GreenSpace’s initiative of offering to plant real trees, and how there is so much potential in adding real-world relevance to a social game. Consider Tumblr posts getting tens of thousands of notes, or questionable facts spreading like wildfire on Facebook to see how effective online socialization can be in sharing a message. We’ve also seen great success with Kickstarter projects hitting their needed financing from large numbers of small backers. It’s still too early to tell if Time Tribe and Harry Potter Alliance really will effect lasting behavior change or raise serious money through gaming, but there’s very real potential for charitable giving that’s relevant and easy.

If anyone needs me, I’ll be over here trying to figure out how to time-travel back to give this game to my ten-year-old self.

Adobe CTO Bails On Company In Favor Of An Apple Job