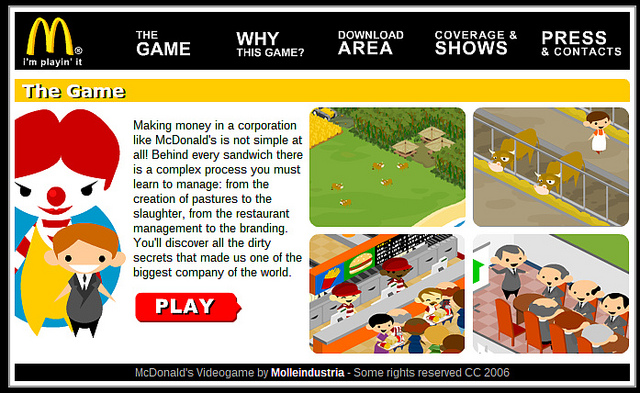 I’m not sure why educational games are the unloved, unpopular side of the games industry. Beloved classic PC game Oregon Trail is an edu title, and it’s still very playable today. A recent Facebook version from Blue Fang shows how much love and nostalgia early players still have for it. Educational games might not get the spotlight, but serious games have been an effective way to use games as lessons on concepts and material since Oregon Trail days.

The Evil Clown of McVideogame

McVideogame, from Italian indies Molleindustria, is a cute and colorful resource management sim. You can play it in your browser right now, and you really should. (Unless you’re at work. In that case, you might want to play it stealthily, with the sound off.).

Even though McVideogame  resembles casual hits like Cake Mania or Diner Dash, you’ll quickly discover that you’re not exactly icing cupcakes here. Players need to bulldoze sections of rainforest in order to clear the land on which to raise the cows that become burgers. Players will also find that production lags unless they start treating these cows with hormones, and genetically modifying their feed. The difficulty balance is carefully set so that in order to progress, players need to keep production going at any cost. I did feel pretty bad firing my non-smiling employees, but I needed to, or I wouldn’t stay profitable!

The real brilliance of the difficulty curve comes in when players who do well are also led to questionable choices. Once your McFranchise is going well, you’ll be a target for anti-corporate protesters, and you’ll need to push a counter-attack that strongly resembles certain McDonalds’ initiatives. McVideogame is accessible, and even fun, while making a very tangible point about fast food production.

Depression Quest is a text-based interactive story about dealing with depression. It’s hard to describe Depression Quest as a really fun experience, in the sense that The Sims or Dungelot is fun, but it’s a very playable and engaging format. Players read a section of the story, and are presented with a series of possible reactions to that event, just like in Choice Of The Star Captain. Depression Quest uses this same interface, but strikes out some of the options. The player might know there’s a “right” answer to a presented event, or the player might want to make a certain choice, but it’s crossed out. Players can read choices like getting to bed at a reasonable hour, talking honestly with friends, or calling a therapist, but those options are inaccessible.

I would still hesitate to call Depression Quest a good time, but it’s both accessible and artistic, two hallmarks of a successful serious game.  Depression Quest offers no surprises, the game opens with a trigger warning for depression and asks players to donate to a depression-focused charity in lieu of purchasing the game, and successfully draws attention to problems of depression in everyday life in an effective interactive format.

All right, but apart from the sanitation, medicine, education, wine, public order, irrigation, roads, the fresh water system and public health, what have the Romans ever done for us?

Straight strategy games can be serious and educational, too. Ask a Risk or Axis&Allies player which countries border France, and they’ll know immediately without having to Wikipedia the answer. A college friend and I passed our Anthro 101 class with answers shamelessly cribbed from all-night Civ sessions. (Pop quiz on Bronze Age developments? Let’s see, Prof, there’s Pottery, The Wheel, Alphabet, Ceremonial Burial… ) Games that deal with the mechanics of geography and history can introduce and cement facts, as well as teaching relationships, even if that’s not the goal of the game.

Developer Seth Alter applies that understanding in Neocolonialism, by using strong strategy game mechanics to create a very playable object lesson in world economics. Neocolonialism asks players to defeat their friends or the AI by using soft power and economic control instead of building massive stacks of trebuchets and tanks, and then rolling them onto Montezuma’s capital.

As players of Neocolonialism pursue wealth, game mechanics represent the relationship between the player’s financial choices (like vote buying or inside trading) and the consequences across the world. This is a very playable, balanced game, with a clear educational goal.

Alter has also upended the world map for the game experience, putting Antarctica at the top of the game map and Greenland at the bottom. He’s definitely aware of the power of game boards to teach geography and the power of maps to enforce dominance, and the upside-down game map can make players hyperaware of their global expectations, and even a little uncomfortable.

My Cotton Picking Life, a free game from GameTheNews.net, a serious game studio devoted to developing relevant games, asks users to relate to forced child labor by recreating the monotony of child laborers. A worthy goal, but an awful mismatch for the interactive nature of games and gaming.  Players click repeatedly on buttons marked “Pick Cotton”. They don’t pick bigger or smaller cotton pieces, encounter setbacks, or earn powerups. Players click the pick button and click the pick button, until they get bored and exit, when they’re reminded that forced laborers aren’t allowed to quit. Players aren’t sent back to pick more cotton (which was honestly my expectation, especially on the first attempt), but they’re shown how little money they’d have made actually laboring in the time they were playing.

Raising awareness of child labor is a really honorable goal, and I look forward to seeing new GameTheNews works, but a game designed for single-player monotony really fails to take advantage what serious games could offer. The finished product just doesn’t have the emotional or educational impact of McVideogame and other serious game titles.

With more people of all backgrounds playing games and game development gaining respectability as an expressive and effective medium,  I think serious games are poised to make an impact. I can’t wait to see what comes next!

Have you played any meaningful games recently? What were they?