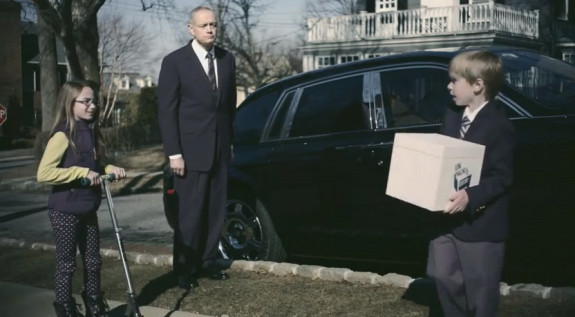 Samsung has rolled out another teaser video for their next flagship phone, Galaxy S4 ahead of its launch. This teaser video doesn’t reveal any juicy details about the device at all, its just like the last one, but it sure is building up hype. The successor to the Galaxy S3 is set to launch on March 14th in New York City.

The first teaser video for the Galaxy S4 was released a couple of days back to give you an idea about what to expect from the event. The video introduced us to a little kid named Jeremy who has been chosen to keep Samsung’s Next Big Thing secure and has been told not to let anybody see it before the event. Check out the teaser below.

This teaser picks up right where the last video left, where Jeremy had the big mystery box that contains the Galaxy S4 along with all of its magic. Now, in the new video Jeremy finally arrives home safely with the Galaxy S4 box, his driver helps a little. He then quickly brings the mystery box up to his room when a neighborhood child asks him about what’s inside the box. Later, in the video Jeremy is shown talking to his dog and telling him that the contents inside the box are pretty “irresistible” and that he (the dog) should look inside the box telling him that it will blow him (dog) away. There’s also a girl who wants to see what’s inside the box ( who doesn’t?), she knows that, because of her, Jeremy closes his curtains. Jeremy even keeps the box from his mom who brings him food.

When Jeremy senses everything is safe, he again takes a look at the contents of the box and once again, there’s a bright light emitting from the box and awesome sound effects that point to something really magical. (Take that iDorks)

Jeremy is then shown saying that the Galaxy S4 is “beautiful” and also adds that the device is in “his favorite color”. This might be a hint to multiple colors for the Galaxy S4. He again goes on saying other cool words like “totally amazing” and “unreal”. He’s one heck of an Android fan.

What we hate about Jeremy so far is that he doesn’t disclose anything about the device’s design, features or specs – we know it’s magical, kid, but we want to see what it looks like. However, that’s the point of teasers, just to tease us and build up hype for something big.

Well, even if Jeremy doesn’t want to show us what the Galaxy S4 looks like, we have seen some recent leaked pics for the device that show us the Galaxy S4 will feature the same plastic design as its predecessor. Samsung also shared a partial pic of the device on its official Facebook page and it looks pretty similar to the Galaxy S3.

Just one more day to go before the Samsung Unpacked event in NYC. We’ll be bringing you all the juicy details from the event. So don’t forget to subscribe to our blog and stay tuned.