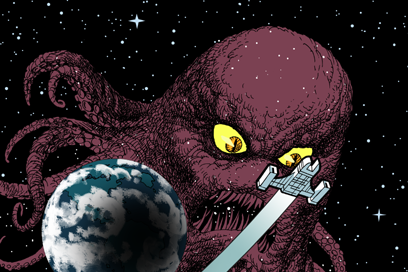 Choice of the Star Captain is a new text-based adventure for iOs, Android or web browsers. In this ChoiceScript game, players take on the role of a young pilot, recruited for a special secret mission for StratComm in the space battle of humans versus Blob.

Players quickly discover that the shipboard computer is not the sexy and efficient lady-voice. Instead, Lloyd, the ship’s AI, treats the player with undisguised contempt, and shades of Douglas Adams’ hyper-intelligent and miserable Marvin. At one point Lloyd stopped being horrible to me, and told me that, since I had only an infinitesimal chance of surviving the mission, he thought he’d make my last few seconds as nice as possible. That was the first time this text-based iPad game made me laugh out loud, but when I survived, Lloyd became suitably condescending again.

The player is almost immediately recruited by Salazar, an agent at StratComm who has some, uh, unique recruiting methods. After taking a crazy aptitude test, with questions like how gravity smells or how many fuzzy Thursdays are purple, your player is recruited to join the war against  the evil alien Blobs! Salazar doesn’t seem surprised, but everyone else in StratComm find the player is an unusual rookie.

As in previous ChoiceScript games like Heroes Rise, players can pick their name and gender. There aren’t any romantic subplots, or at least I was much too involved in saving the world to uncover any love interests! I was thoroughly delighted that my gritty spaceship mechanic, Gressle, was a lady. Players can ask her to improve a particular section of the ship whenever they dock, and continuously improve and modify their ship.

As the player responds to StratComm commands and engages in the epic battle of humans versus Blobs, a campy space opera unfolds. Space Captain is good, goofy fun, and manages to still have dramatic tension on some of the choices. Are the Blobs bent on destruction? Are the evil aliens all really so evil? Should I set my phaser to stun? Is Lloyd running his own agenda? What’s the deal with Salazar, anyway?

Stop Here If You Hate Spoilers!

Star Captain allows players to make a series of choices about how to complete their missions (Or a choice to NOT complete their missions!) and how to interact with strange NPCs. The familiar Choice of Games format, with scenes and choices forming chapters that form a cohesive narrative works well here. I love text based games in general, and Choice of Games in particular, but I have to admit that not every Choice of… story is equally effective in this format. Although I thoroughly enjoyed  To The City of The Clouds, as I played, I couldn’t help feeling like I was missing out on other storylines, and was constantly convinced I was was wondering off in the jungle, away from the plot.

Star Captain cleverly uses one of my unfavorite narrative devices to great effect here. The player is the Blobs’ chosen one, so every crazy answer I picked on the goofy ‘aptitude test’ at the very beginning was the foreordained correct answer. When I did something reckless, I was showing the Blobs required courage! Everything I’d picked to do, from snarking back at Lloyd to menial repair jobs was exactly what I needed to do to bring peace between the Blobs and humans. I usually think making the player a magical chosen one is a narrative cop-out, but this was so well done, I might have to reconsider that standpoint.

In the final chapter, when Salazar mentions his mental reprogramming, I laughed out loud again. (I should seriously rethink working in coffeeshops, especially after Bang With Friends.) Overall, the game feels like a pulpy sci-fi along the lines of Harry Harrison’s hilarious Stainless Steel Rat series. Fans of campy space operas will thoroughly enjoy Choice of The Star Captain.