Home NewsEntertainment The (Other) iTunes $0.99 Movie of the Week: ‘Woodshock’
EntertainmentFeaturedTV and Movies 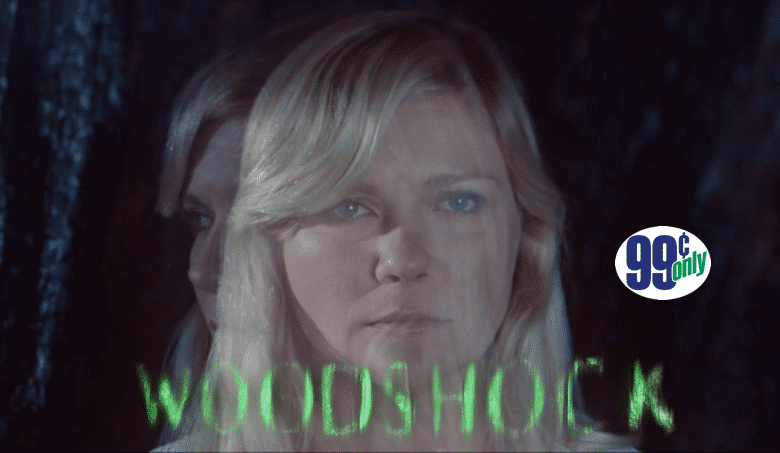 Ok, the featured $0.99 pick this week is a little Gerard Butler starring action flick called Den of Thieves. It looks like your typical sort of Butler action vehicle, and my personal opinion on that front is if you’ve seen one Butler action flick (and I have) you’ve probably seen them all. So yeah, I was more than happy to skip Den of Thieves this week. Luckily, most of the A24 Films catalogue is currently available in the “Movies You Might’ve Missed” section of iTunes. So …

This week, Kirsten Dunst drifts aimlessly through the dense emotional forest that is Woodshock.

When I Turned Around, You Were Gone

After the death of her mother, Theresa (Dunst) embarks on a drug-fueled odyssey that threatens to alter not just her consciousness, but the state of her very life. Welcome to the stylish but ultimately vapid world of Kate & Laura Mulleavy’s Woodshock.

Are You Sure You Wanna Do This?

For the sake of saving some of you a wee bit of time, I’ll just come right out and tell you that Woodshock is not a very good movie. Now, if you’re still reading, I’ll go ahead and assume that you’re at least moderately interested as to why. Don’t worry, I’ll get to that soon enough. But before we get to the film’s multifarious faults, it seems a bit more fair to cover some of Woodshock‘s positives. So let’s start there, shall we?

Good, ’cause you might be surprised to learn that – almost in spite of itself – there is a lot to like about Kate & Laura Mulleavy’s film. In fact, purely from a stylistic point, Woodshock is a captivatingly ambiguous exploration of grief and fractured consciousness. One that utilizes a stark blend of sumptuous photography, entrancing editorial techniques, a deceptively disaffected original score, and a daringly muted emotional palette to craft an abstract psychological thriller about a young woman coming unglued from reality; or rather a young woman ungluing herself from the tragic reality of her own making.

Sounds intriguing, right? It actually should be. Sadly, all the style in the world cannot make up for a complete and utter lack of narrative intrigue. As much as the Mulleavys (who cut their teeth in the fashion world) try to dress their film up with stunning imagery and wild editorial flourishes, Woodshock never finds anything remotely interesting to add to the mix story-wise. There’s little to no emotion from star Kirsten Dunst or any of her costars. There’s zero context for any of the relationships she shares with them (be it the mother, boyfriend, coworker/co-conspirator, friends, etc.), and that means there are no emotional stakes at play in the Mulleavys’ tepid, undercooked narrative.

To put it bluntly, nothing really happens in Woodshock, and there’s never any reason to care whether or not anything does. As a result, those lavish stylistic touches come off as cheap, film school gimmicks rather than aesthetically potent narrative tools; thus leaving Woodshock to toil along as little more than a tragically empty vessel from its opening frame to its last.

While there’s much to admire about Kate & Laura Mulleavys’ directorial debut in terms of style, there’s almost nothing worth noting in terms of drama or narrative. Obviously, I just can’t recommend you spend your dollar (or 100 minutes of your life) on the empty, meandering foible that is Woodshock. That being said, you should probably take note of what the Mulleavys do next, ’cause it’s certain to be of interest. Until then, if you’re on the hunt for an eerie, trippy little drama about a woman on the edge, you should think about dropping $3.99 on Sarah Adina Smith’s haunting 2014 drama The Midnight Swim. Trust me … or just watch the trailer and judge for yourself.