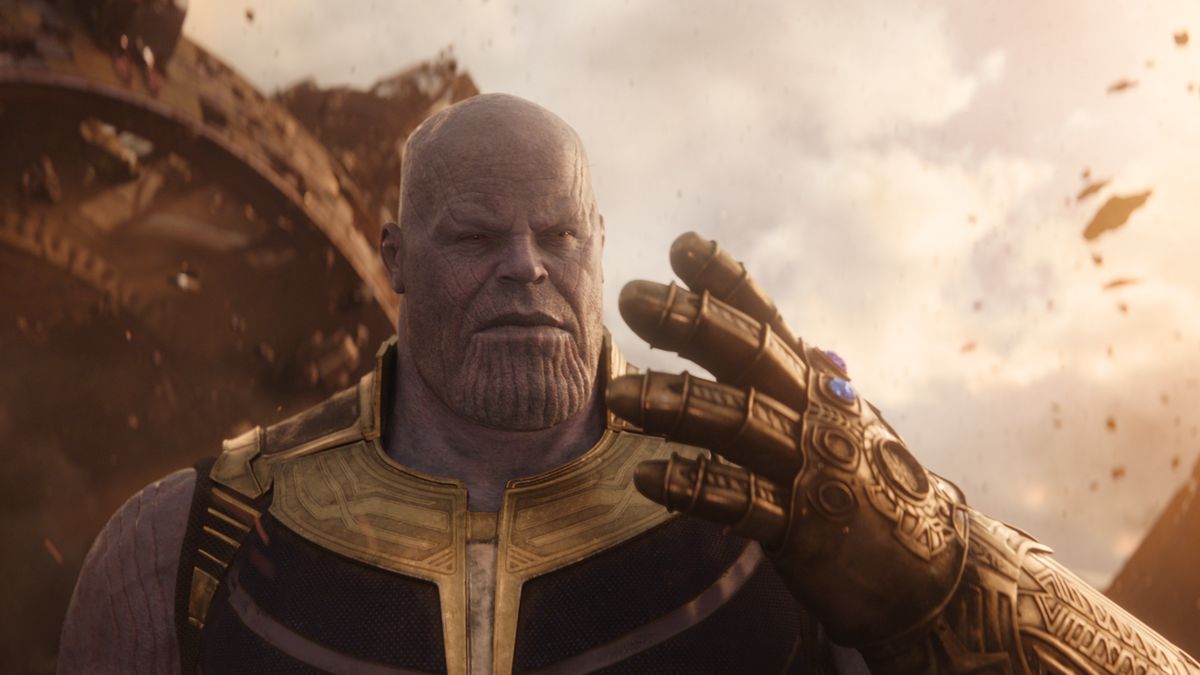 Has Infinity War got you wanting to read more about the villain Thanos? Do you need to know what happens next? With this reading guide, it’s a *snap*.

Writer/Artist Jim Starlin and writer Mike Friedrich were working on Iron Man. They took the opportunity to set up a cosmic mythology introducing Thanos “The Mad Titan” and his mortal enemy Drax the Destroyer. Friedrich was off the book with the following issue and then Starlin was off the next.

Not letting his creation go to waste, Starlin revived Thanos in the low-selling Captain Marvel. Captain Mar-Vell wasn’t a particularly interesting character, but Starlin made him a mouthpiece for the hippy counter-culture. The Kree warrior’s mind was expanded to 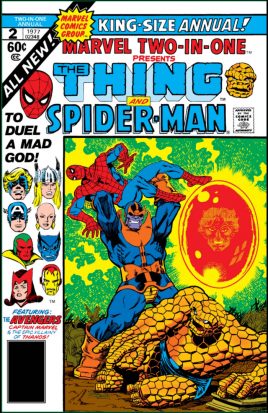 possess “Cosmic Awareness.” Thanos gains possession of the Cosmic Cube and becomes God until his own self-doubt causes his ruination.

Starlin was forced off Captain Marvel but returned to the company to write and draw the adventures of Adam Warlock. Warlock was a Jack Kirby character who had been reinterpreted as a “Cosmic Christ” figure. Starlin introduced the Soul Gem, a powerful artifact Warlock used to battle evil. He also brought back Thanos and introduced Thanos’ ward, Gamora, the deadliest woman alive. Thanos aided Warlock in a battle against The Magus, an evil version of Warlock from an alternate future.

Thanos appeared to be an ally to Warlock but was actually siphoning off the Gem’s power, which he combined with five other Gems, not yet named, to make a weapon capable of destroying a star. Warlock needed the aid of the Avengers, Spider-Man, and the Thing to slay the Mad Titan.

Starlin’s Captain Marvel is available in paperback and digital, as is his run on Warlock.  A selection of these stories as well as ancillary titles, tying in but not necessary to Starlin’s, are available in Avengers vs. Thanos. There is also a Drax vs. Thanos story by Starlin not collected elsewhere.

Starlin later took over Silver Surfer. The Surfer ends up in the afterworld, finding Thanos and Lady Death waiting for him. The Surfer escapes, but doing so allows Thanos to return to life. Believing the universe needs to be balanced, he sets off in Thanos Quest to collect the other five Soul Gems. Upon realizing they possess other powers, he renames them the Infinity Gems.

Thus starts the Infinity Saga. In the Infinity Gauntlet, Thanos uses the Gauntlet to wipe out half the universe. The remaining heroes as well as Drax, Gamora, and Warlock battle the Mad Titan. Death no longer has interest in Thanos, but Mephisto (Marvel’s version of the Devil) wants to use the Gauntlet for his own ends.

In the aftermath of the story, The Infinity Watch is born, a team tasked with protecting one Infinity Gem each. Thanos is given the Reality Gem. Thanos, a god twice over and still unsatisfied, dared not to use his Gem. 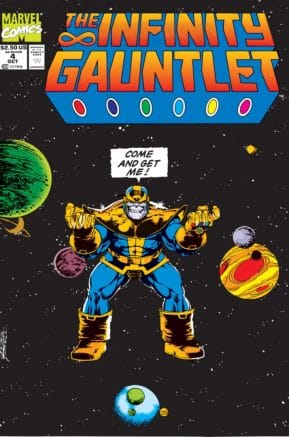 When he possessed the Gauntlet, Adam Warlock expunged himself of good and evil. The evil reformed as the Magus who uses the Cosmic Cube and Gauntlet to create a pocket dimension of evil doppelgängers of Earth’s heroes. This lead to the Infinity War, where Warlock, Thanos, and Earth’s heroes fought against Warlock’s evil self.

In the last story, Infinity Crusade, another alternate Warlock manifests: The Goddess. The good aspect of Warlock attempts to remove evil from the universe, she mind controls Earth’s religious heroes into serving her. She realizes that with life there will always be evil and sets out to destroy all life.

Starlin revisits Thanos in the 2000’s with The Infinity Abyss, Marvel Universe: The End, and he wrote half of a Thanos ongoing series. The non-Starlin half of the ongoing series also introduced Star-Lord into the Marvel Universe proper. Starlin intended to make Thanos more of a heroic figure over time, but apparently Marvel editorial had their own plans.

Keith Giffen (who wrote the second half of the Thanos ongoing), Dan Abnett, and Andy Lanning relaunched Marvel’s cosmic comics with Annihilation. The extradimensional conqueror Annihilus breached into our universe. Thanos allies with Annihilus, although it turns out to be a ploy to destroy him. Before Thanos can save the universe, Drax kills him. 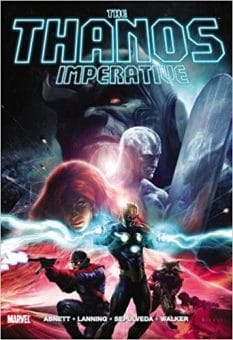 Thanos next appears as the Avatar of Death in Guardians of the Galaxy leading into The Thanos Imperative. Thanos has returned to life so he can kill the Cancerverse, a universe overtaken by a demonic presence who keeps everything alive in horrifying ways. It bleeds over into our universe and Thanos, The Guardians, and Nova head to stop the Cancerverse’s ruler – an evil Mar-Vell. Thanos Imperative is a very cool story, but is the finale to several years of comics and is best read after those.

Starlin returned in 2014 with a trilogy of Thanos graphic novels and two tie-in series. The Infinity Revelation, The Infinity Relativity, and The Infinity Finale. Thanos senses another unbalance. Annihilus is more powerful than ever and Thanos needs Warlock to stop him. Only he finds that’s just what Annihilus wanted. A weakness in spacetime allows the conqueror to steal Warlock’s power.

The graphic novels are supplemented by Thanos vs. Hulk in between Revelation and Relativity and The Infinity Entity between Relativity and Finale. Not essential reading, these Starlin-written miniseries fill in the gaps to how Annihilus and Warlock end up where they are.

Starlin is now releasing his final Thanos story in the form of the second trilogy of graphic novels drawn by Alan Davis. The Infinity Siblings featuring Thanos’ brother Starfox is out now. The Infinity Conflict releases November and The Infinity End should release next year.

Thanos by Lemire and Cates

Starlin’s Thanos Trilogies, while in the Marvel Universe, exists mostly separate. Marvel has also released a Thanos ongoing series more directly tying into their other comics. 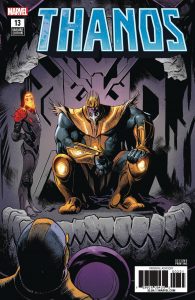 Jeff Lemire writes and Mike Deodato illustrates the first two books of this series, in which the Mad Titan finds himself for the first time in a very long time, mortal. A threat only Thanos can stop emerges, and Thanos must fight to live, but does he want to? Meanwhile, Starfox gathers a team to finally kill Thanos once and for all. Available in paperback and digitally.

The second story by Donny Cates (Writing) and Geoff Shaw (Art) has Thanos coming face to face with a future version of himself where he has everything he ever wanted. Thanos is horrified, but can he beat a more powerful version of himself? Especially one aided by Frank Castle, The Cosmic Ghost Rider. Thanos Wins will be available in paperback and complete digital collection in July.

If you prefer your comics more heroic, we released a suggested reading list for the Avengers!