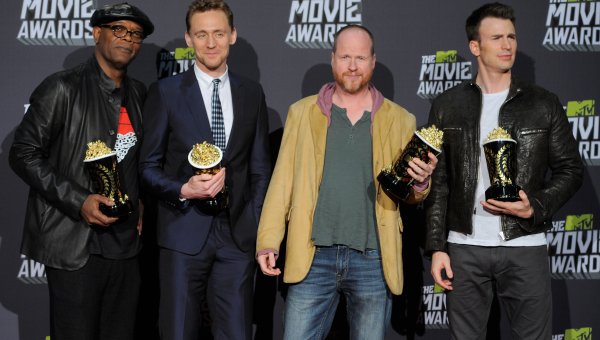 The MTV Movie Awards are something else. Sure the awards probably mean something to some of the actors who win them. But seeing that the nominees are selected by MTV executives and the winners are chosen by whoever votes on the MTV website, to win means an odd pairing of stodgy suits and “Twilight” loving teens approve of your work. In between random categories, there is a mix between promoting upcoming movies and attempts at shocking memorable events. Occasionally we get a geek-worthy moment too. This year we had a handful of those in between many awkward scenes playing out with thousands screaming in the background for no apparent reason.

The MTV Movie Awards Get Avenged

Right out of the gate, host Rebel Wilson of “Pitch Perfect” fame suits up in a pink pony-tailed Iron Man suit to fly from Australia to the award show in a pre-recorded segment. At first the different looking suit is worth a chuckle, but it ultimately proves to be a lazy joke that goes on too long. We comic book enthusiasts take our hero costumes very seriously. Take note future MTV Movie Awards.

But not too soon after that we are rewarded with the cast of “Star Trek into Darkness.” They arrive in a giant set that mirrors the movie’s poster, a rubble-filled hole in the wall. Chris Pine, Zoe Saldana and Zachary Quinto received a warm reception and presented the Best Fight award to “The Avengers.” In fact “The Avengers” pretty much owned the broadcast, taking home Best Villain for Tom Hiddleston and Best Movie in addition to the Best Fight award. The film was tied for the most wins of the night with “Silver Linings Playbook.” What an odd pairing.

Representing “The Avengers,” writer/director/geek legend Joss Whedon was there along with Hiddleston, Chris Evans and Samuel L. Jackson to accept the awards. None seemed more excited than Hiddleston who appeared to be genuinely thrilled to earn the Villain award. Whedon cracked some jokes, Jackson swore a lot and I’m not sure if we ever heard Evans speak. Leave it to Captain America to keep the silent demeanor.

Marvel continued their constant hold over the MTV Movie Awards with an exclusive clip from “Iron Man 3.” The clip was from the scene we know from the trailers where The Mandarin attacks Tony Stark’s fancy house with helicopters. Stark and his new suit attack back with a piano. It’s an exciting scene, but I fear we’re seeing an awful lot of the movie’s big moments in these previews and sneak peeks. “Iron Man 3” hits theaters on May 3rd.

One of the night’s biggest moments saw Eddie Redmayne, Logan Lerman, and Jonah Hill present the Trailblazer award to their mutual co-star Emma Watson. Frankly it’s a bit amazing how marginalized her 10 year role as Hermione Granger in the “Harry Potter” franchise is during the award presentation. As the biggest part she will ever have as an actress, it’s odd that the eight films were collectively broken down to have equal air time with her few other roles in the accompanying video montage. But Watson was as charming as ever. She was on the verge of tears when Lerman described their friendship and received the award humbly. I wouldn’t expect anything less from the “brightest witch of her age.”

The award show also featured Liam Hemsworth presenting the trailer premiere for “The Hunger Games: Catching Fire,” a trailer so epic that I will be posting a write up on it later this week. So check back for that. There was also a cameo from Peter Dinklage introducing Will Ferrell who won the Comedic Genius award and a pony-tailed Brad Pitt giving “The Avengers” the Best Movie trophy with a “World War Z” backdrop. These round out the geeky moments for the night.

Overall, the award show was slightly more pleasant than previous years because of the mostly absent “Twilight” saga, which usually wins everything. Taylor Lautner did win “Best Shirtless Moment” but he can have that one. If you’re looking for a quality movie award show, this is not it. The MTV Movie Awards usually push upcoming films and give out awards for things like “Best WTF Moment” and “Best Kiss.” Let us know what you thought about the show in the comments.