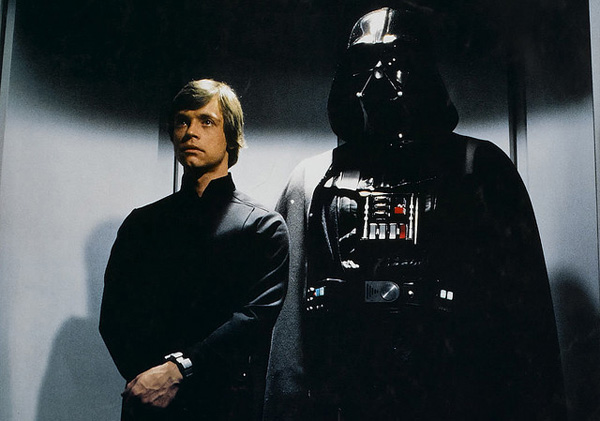 This Sunday is Father’s Day, the annual tie giving, barbecuing holiday that adorns our June calendars every year. The week before is filled with racked brains trying to figure out something our poppas would actually want. It’s not any easy process. Unless you are in fact a dad and then it’s time to just sit back and relax. Why not reward yourself with a nice father’s day themed movie marathon? Maybe you could watch these classics with your padre or child. But if your dad is like mine, the first sign of a film without Clint Eastwood in a starring role will cause him to lose interest. Well, we tried. Here is our geek friendly, Father’s Day viewer’s guide.

“Return of the Jedi”

Sure, the film’s predecessor “Empire Strikes Back” contains the most famous dad related line in movie history, but “Jedi” builds on that revelation throughout. Luke comes to terms with Darth Vader being his father while simultaneously acting more like a Jedi scene by scene. In the end, the personification of evil throughout the “Star Wars” trilogy caves in and shows compassion for his son by saving him from the shriveled worm of an emperor. If those two can put their differences aside, there’s no reason you and your dad can’t get along at the Father’s Day dinner table for one night.

One of the more intriguing comic book families, Odin is the father of both the film’s hero (Thor) and villain (Loki). Sure the latter isn’t his biological son, but that doesn’t mean the ruler of Asgard can’t be a proud daddy. Well until Loki tries to destroy everything on multiple occasions…and then again in “the Avengers.” Even though it is Thor’s movie, Odin features prominently and has Anthony Hopkins playing him. Sounds like a decent dad to me.

“Back to the Future”-

Dads aren’t infallible, we know that. But Marty McFly gets to know his dad on a totally different level than we’ll ever know ours. Travelling back in time to witness his dad be a peeping tom, strike out with the girls and get beaten up by bullies, it’s actually the son who has to stick up for his dad in this instance. All the while, he has to fight off advances from his mother and try to get her interested in his dad. What a strange nightmare… or dream if you’re a weirdo.

This is what happens when you try to touch the butt. For those who haven’t seen the movie, the butt is what the fish call the boat right before Nemo gets caught and transported to a dentist’s office in Australia. The film follows Nemo’s dad, Marlin, as he treks through the sea trying to find his lost son. It’s just like “Taken,” but with sea turtles, Ellen DeGeneres and laughter.

Opening in theaters on Friday, the new Superman flick promises time with both of Clark’s famous dads, Jor-El and Jonathon Kent. Both are caring dads who want the best for their son. It just so happens that one of them is a scientist from a doomed alien planet and the other is Kansas farmer. But good dads come in all shapes and sizes. At least Superman didn’t have to deal with either of his dads being slightly pervy like Marty McFly did, the Man of Steel doesn’t need anything else to worry about.

There’s the list. Are there any geek inspired Father’s Day movies we left out? Happy Father’s Day to all you dads out there.