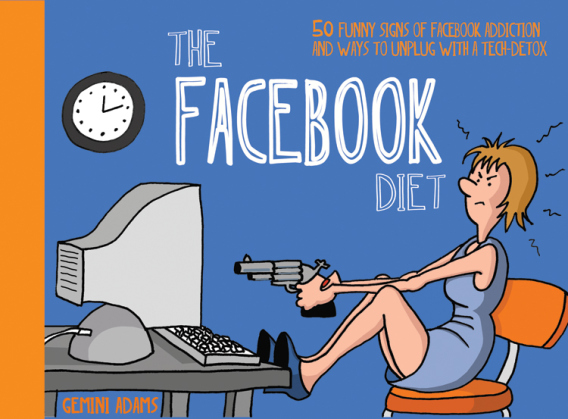 The Facebook Diet by Gemini Adams promises to highlight all the hilarious and strange things in the world of Facebook. I was excited to read this because Facebook’s ability to connect distant friends has brought so many odd and amusing moments to my life. A cosplaying college friend recently posted photos from a con, with — unknown to her — one of my writing friends signing books at his booth in the background behind her. A few months ago, I posted about hurting my back, and got immediate responses from an ex-pat buddy now in Thailand, an old boyfriend’s new girlfriend, and a guy I worked with on a magazine that folded three years ago, all consoling me with how they sustained similar injuries but made full recoveries. Facebook connections offer endless potential for funny, odd and warm moments in my own life, and I admit to laughing at tales of Facebook gone disasterously wrong, too. Dumb criminals caught by posting photos of their loot, sick-day employees accidentally checking in from the beach,  and the hilariously stupid posts on Failbook.

But the bulk of The Facebook Diet is 50 cartoons about how you might know you’re a Facebook addict. I really wanted to laugh, but I found myself cringing at the punchlines about literally writing on a friend’s wall or literally poking people. Those were amusing about eight or ten years ago, when one might conceivably speak to someone who believed writing on someone’s wall meant graffiti. Also, are people still poking on Facebook? Is that a thing? Some of the fifty jokes are the type of filler that could apply to pretty much any hobby. Your friends think you should go to a Facebook addicts support group! and Your romantic partner wishes you’d spend more time with them! are the same jokes made about hardcore videogamers, and before that, golf widows and fishing widows. I was sad to see that most of the humor hinged how much time those Facebook addicts waste socializing at the screen, instead of genuinely amusing moments that can only occur on Facebook. (Spotify sharing that guilty-pleasure mix with everyone you know, for example.)

Reading through the intro and the jokes, I couldn’t tell if the book is meant to be a light-hearted giggle on how everyone’s addicted to Facebook these days, and we’re meant to all recognize ourselves and our own habits in the cartoons, or if it’s meant to be denouncing kids today and their pointless internet socializing and how much better offline, “real” interactions would be. Either way, there’s unfortunately not a lot to relate to in the comics or jokes.

Overall, the book lacks a deep understanding of Facebook, either as software or as a social construction. Facebook is described as “the domain for friendly fire. The most damage you can do is “poke” someone (or post a really unflattering picture of them!)”.

Really? That’s the most damage that can be done by Facebooking? I suppose the author hasn’t seen anything in the news about anyone losing their job, getting arrested, or splitting up because of thoughtless Facebook updating, and lacks enough knowledge of Facebook to imagine how updates, check-ins and photos could contribute to any of those events. Effects of the Chinese human flesh search engine (人肉) show clearly the dark consequences of social media, and it’s not just a photo from bad angle.

The final section wraps up with ways to detox from Facebook, and this is where I finally decide that the overall message is asking readers to stop wasting so much time on Facebook. I discover that this is the first book in the Unplug series, a planned series of tech humor books, meant to poke fun at internet addicts and their need for digital detox. The Facebook Diet is described as a humor gift book for the Facebook addict in your life, but it seems the best used as a passive-aggressive gift to someone the giver would like to see waste less time online.

The Facebook Diet suggests several exaggeratedly drastic ways to avoid Facebook, like attaching an elastic band to your wrist and flicking the elastic to discourage Facebook use, or moving to Facebook-free China (Many factors make it challenging to pin down the exact number of Chinese Facebook accounts, but this Bloomberg article puts the number at 63.5 million.), but again the humor falls terribly flat. I did find the suggested Twitter hashtag to discuss the book and suggestions of several websites to use in order to manage one’s internet addiction to be pretty funny, but I’m not sure if that was the intention.

iPhone and Other Apple Products To Be Sold At Staples Soon?