Tamagotchi Pets Back for 2014, Bandai Announces 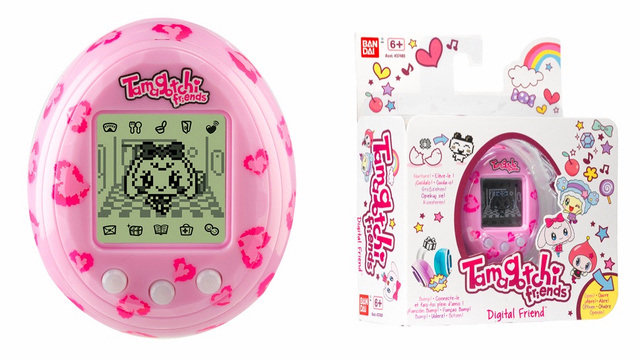 Holy 90’s flashback, Bandai! Seventeen years after they first started producing those tiny, pixelated bundles of joy and unexpected responsibility, Bandai has announced that it will be relaunching their infamous beeping eggs as a new line, Tamagotchi Friends.

Featuring a new look and new features but the same basic gameplay (three buttons on the bottom, square black-and-white LCD screen, point being to keep your pet from a digital grave as long as humanly possible), Bandai is hoping to entice both older players who remember the original wave and new consumers who do not yet know how complicated it can actually be to keep a pixel pet fed, entertained, and alive.

In order to compete with similar electronic toys in the modern market, Bandai has announced some upgrades to the Tamagotchi Friends model. In keeping with its name change from “Tamagotchi” to “Tamagotchi Friends,” each game egg now includes one of a cast of characters with unique designs, aspirations, hobbies, and temperaments. While in the older models there was very little option in terms of what kind of Tamagotchi pet a player could get and all of them had the same basic personality (if one can count eating, pooping, and sleeping as a personality), now each hatching Tamagotchi has a number of possibilities, each with their own evolution path. Bandai has also updated the design of the eggs to reflect a more modern aesthetic, and to give players as much variety in their devices as there is variety in their possible pets.

Bandai has also made the Tamagotchi more interactive– now, if you want a break from trying to figure out exactly why your pet is beeping at you, you can simply grab a friend and foist your pet on them for a few moments over a short-range wifi connection. Your Tamagotchi pets can go on “play dates” with other Tamagotchi pets, which will open up new interaction options and a new set of commands and rewards for the pet and their player.

Bandai will also have an interactive online game revolving around the Tamagotchi Friends line that players will be able to access on the Tamagotchi Friends website. Dream Town will be an extension of the handheld egg, and will be based on an earlier Tamagotchi website game called Tamatown. In Tamatown, players could upload their Tamagotchi’s information and play games in the different segments of the town to earn points and game items to make their Tamagotchis happier and healthier. The items gained in Tamatown would be released with a code which could be then input into the handheld egg to transfer the item into the pet’s possession. Dream Town will have nine different areas to explore, each area with its own unique games and items.

Bandai’s revamp of the Tamagotchi line doesn’t stop at online and offline interaction though; they’ve gone even further to introduce each of the individual possible Tamagotchi pets to the younger target audience. The company has  begun releasing episodes of a short, animated cartoon series online which started in November and will continue through 2014 as the Tamagotchi Friends line is released for US consumption in the fall, featuring as main characters some of the more classic-designed Tamagotchis and introducing the newer Tamagotchi Friends. A group of mascot Tamagotchi from the original generation become exchange students at the Dream School in Dream Town, and proceed to make friends with the other Tamagotchi, adjust to their new living arrangements, and pursue their individual aspirations.

Absolutely no joke, have a look for yourself:

For those who remember owning a Tamagotchi in elementary or middle school, this may all seem strange and baffling. The mid-90s Tamagotchi experience consisted mostly of incessant beeping and the childhood realization that pets, even electronic ones, would die if you didn’t take care of them properly. Possibly this even included Tamagotchis being banned from your school/classroom or needing to beg one’s parents to babysit your Tamagotchi, as it was likely to pass away without constant care. Surely cartoon shows and Tamagotchi pets with actual personalities weren’t part of that? The confusion between modern-day product and nostalgic memory can be explained largely by one thing– while Tamagotchis haven’t been popular in North America for almost twenty years, in Japan the Tamagotchi line has been steadily expanding, including multiple handheld generations, games for the Gameboy, Nintendo 64, Nintendo DS, and Wii, as well as several cartoon series and a full-length feature animated film in 2007.

If the nostalgic appeal is the only reason you’d consider picking a Tamagotchi up again, and if all the new Bandai has considered your needs too. In advance of its new Tamagotchi Friend release, they have also released an app for Android and iOS systems called Tamagotchi L.i.f.e. which is based on the original Tamagotchi handhelds and is completely free for download. The app will allow older fans to replay the original handheld egg games the way that they remember: being woken up at three in the morning to clean up after your pet’s “accident.”

Did you have a Tamagotchi pet as a kid? Are you planning to buy a Tamagotchi Friends egg next fall? Share some of your fondest (or least fond) Tamagotchi related memories in the comments.