I’ve spoken at length on here before of the traditional forms of multiplayer online gaming, but what if you’re more armchair general than infantry leader? Because there’s one area of online gaming I have been tangentially involved with for a few years now, and that’s sports management.

Blackout Rugby is a freemium rugby management game, which gives you control of a rugby club in a country of your choice and dumps you into a league playing against fellow human managers. Obviously the initial squad you get are rubbish and the grandstands can just about hold a teeming crowd of two old men and a dog, so the game is about managing your club as an entity, not just the team. Money comes from sponsors, prize money from your positions in the league seasons, and gate receipts. In many ways it’s a Sims style business management game as well as outright sports management, but it’s a fun game that keeps you hooked. It’s that real-time strategy element of seeing something small build up into a world-conquering leviathan, although in this case you’re not building a doom fortress defended by squadrons of tanks. 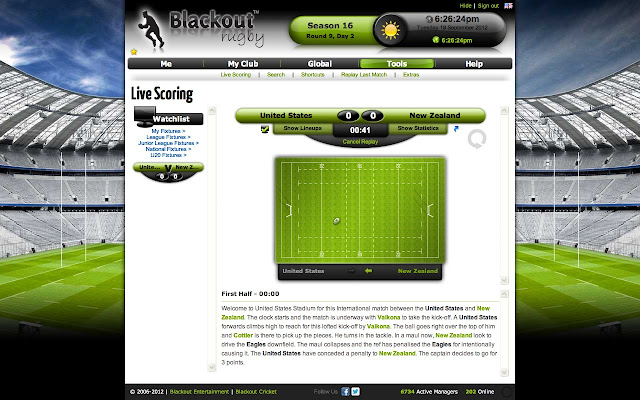 Tales of an Average Online Gamer

I enjoy playing it, and I’ve managed my current team for a total of four in-game seasons and counting. But now I’m stuck in that same old online gaming rut. I’m too good for the hapless n00bs below me, but straggling far, far behind the titans of gaming above me. I’m an inbetweener once again. Turns out the keys to success are largely the same – sacrifice your social life, plow countless hours into your gaming and read more Excel spreadsheets than a Canary Wharf accountant. So you’re thinking the door to progress is slammed in your face because you happen to like going outside and interacting with other humans. Same old story right?

However, in this medium at least there is hope. And I wonder if it could transfer across platforms.

For example, the way player transfers work is just like eBay – a club puts a player up for sale, and other clubs bid for that player with in-game money until the deadline passes. Simple, but it also means it’s very easy for teams with bottomless pits of cash (i.e. those above you who have played the game for years) to put in ludicrous bids and hoover up players. Countless times I have been involved in a tense bidding war at around the $50,000 mark (which is a good price for a half-decent player) only for someone to bid in something stupid like $100,000-200,000 and take the auction right out of everyone’s price range. It’s obvious the bidding club doesn’t NEED this player, but who cares? They’ve got a big squad and an even bigger wallet; for them, $200,000 is pocket change. So the only affordable players left are  either lame players no-one wants, good but old players who will soon become lame, or nothing at all. Some choice.

Of course in your club is the academy system. Invest money in the academy and you can start producing talent from scratch. But this is a lengthy process – I’m four seasons down with no reward yet. At some point this will start paying off, but until then I just have to keep pumping money in. Which all comes back to something I’ve preached on here before – patience. Blackout Rugby has a high turnover rate of players – for many managers they loose interest as soon as they hit the stage I am currently at. But if one reason the clubs above you are successful is that they’ve been round the block a few times, you’ve got to stick it out too. Even the clubs immediately above me have been around for five seasons or more on average. They have steadily built every facility up, waited for sponsors to join (one sponsor joins every season) and amassed a war chest ready to take on the big spenders. Therefore, you have to do the same.

But I may have stumbled upon another trick us mediocre gamers could use to our advantage – time your gaming.

Sounds weird, so let me explain. 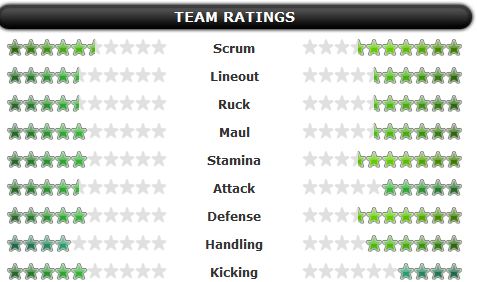 The auctions I bid on are usually afternoon UK time, which is when the majority of Blackout’s users are online. But last night, I happened to check at 3AM before going to bed, and I saw a number of promising young players going for surprisingly reasonable money. Because there was hardly anyone online, the chance of a big club swooping in with it’s massive check book was much decreased. The chances of nabbing a tasty young player for a better price is significantly greater. So perhaps this is a lesson we can all learn?

Think about it. Join a Counter-Strike game teeming full of players around the world playing, and it’s far more likely you’ll spend the round getting killed to death by uber-nerds. However, wait until most of the world is in bed, and you end up playing on quieter servers less likely to be populated by Robocop’s mates – therefore meaning you stay alive longer and get more practice in. As I said before, finding servers matched to your skill level is important. Think of us average gamers as hyenas – waiting for the big nasty lions to go away and leave us with the scraps to eat uninterrupted. Terrible metaphor, but you get my point.

Of course, there is a catch – you do have to stay up to unsociable hours of the night. But we are gamers. By our nature sleep is something we have learnedto do without. So give it a crack sometime. Grab a can of energy drink and lock in for the night shift, and you might be able to get some good hours of play in whilst the playground bullies are off elsewhere.