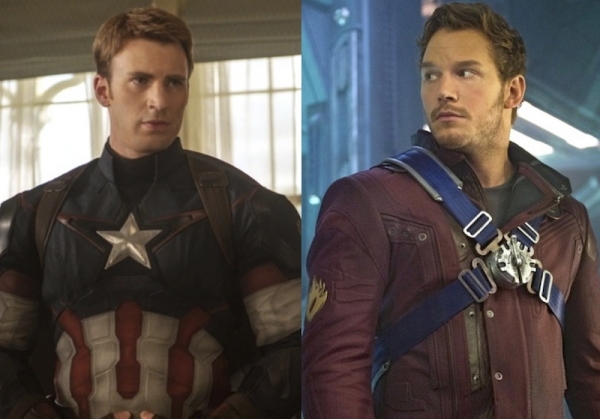 With every summer full of superheroes it’s common now in this day to see our favorite costumed vigilantes at work. What used to be a fan’s dream is now a studios’ race to produce more of our nostalgic childhood. Now as more famous names attach themselves to each super powered blockbuster it’s kind of disappointing to see how many truly carry the legacy of their heroic identities. It’s as if Uncle Ben’s “with great power [and fame] comes great responsibility” has yet to sink in. There are but a few who’ll make their fictional counterparts proud.

Sure, Robert Downing Jr. has fulfilled the role of the billionaire philanthropist on many occasions but there are two others who routinely steal the spotlight. Mr. Captain America himself, Chris Evans, and everyone’s new favorite misfit leader, Chris Pratt, are no strangers to employing their Marvel images to charitable contributions. And in spirit of Super Bowl rivalry, both have agreed to wager their costumed counterparts donning rival NFL merch to the benefit of their local charities.

When it was determined last Sunday after Indiana’s horrible loss to the Patriots, Evans dropped all loyal Marvel ties and proclaimed the Seattle loyalist Pratt his “enemy.” Star-lord then responded in true Guardian of the Galaxy spirit, mocking our Captain America and setting the stakes for the losing team. The payoff is simple. Loser flies over to winning team’s side dressed as their alter ego and visits either Seattle Children’s or Christopher’s Haven. The catch is a bit cruel as they are both diehard fans and will have to sport their rival wear.

With all bets and games aside, the playful wager is a testament to what these two actors truly stand for. You can easily argue that their A list status is very much indebted to their iconic superhero roles, and with that they are indebted to the loyal fan base. While there have been many Batmen and Supermen, and even countless X-Men, it’s certainly inspiring to see to what these roles mean to them. In many cases, the heroes they portray are real to the children that believe in a better tomorrow despite their current state of hardship. All of which brings to mind a question: Are the actors that fill the tights also obligated to the weight of the role. Of course, we’ve seen the sassy attitude and bad decisions of former Mickey Mouse stars and their choice to leave the good example at home with the bong and birth control and to an extent they’re correct, a child’s influence begins at home. But to see the contribution that Chris Pratt and Chris Evans, along with Robert Downy Jr. and a few others, have offered because of the fictional characters they portray further displays to what degree they feel liable for. Apparently to them the suit is more than a paycheck, which makes me wonder if my ten-year-old self would be envious of the marvelous era we live in. Despite whichever team wins, we can all hope to see a Star-Lord Captain America dance off.