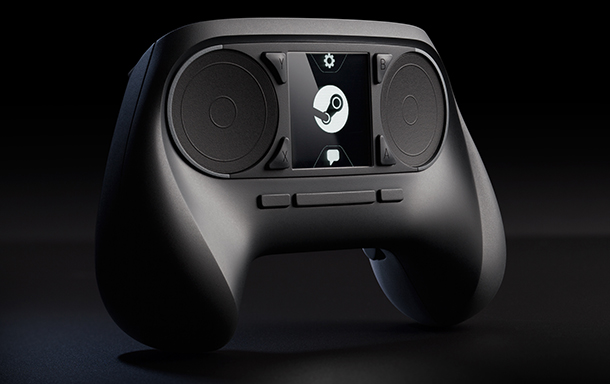 Recent weeks have seen a lot of talk about upcoming Steam products, and particularly the prototype touch-centered Steam controller. It’s easy to understand why. Valve, the creator, has earned a lot of goodwill with its well-received software and steady sense of humor in an industry so frequently prone to publicity problems. Furthermore, the concept manages to seem both familiar and odd simultaneously. Will the final product be worthy of the hype?

The idea of drawing from console and PC standards to create a third option is central to the design philosophy behind Valve’s proposed line of Steam-branded hardware. They plan to offer a powerful gaming hub which provides comfort and convenience but runs PC software and is closely integrated with the main Steam service. If they ultimately hit an appealing price point, they could very well tempt a significant portion of the gaming populace. While this notion is in itself worthy of extensive discussion, the eye-catching item is most certainly the unusual Steam controller.

The unique selling point of the Steam controller is that it forgoes traditional design standards for a layout dominated by two large touch-sensitive areas. The idea is that either touchpad can function in one of various ways at any given moment for any specific game or application. For example, suppose that launching a racing game sets the pads to function much like regular analog sticks or directional pads. Imagine then firing up a strategy game and finding them working like regular touchpads, offering the kind of fine control necessary for micro-managing tiny units.

Steam already has a ‘Big Picture’ mode (essentially a sized-up scrollable interface for a media-center style setup) which functions very nicely with standard controllers so I don’t imagine Valve would have any problems with compatibility profiles. Regardless of any reservations about the implementation, given how extensive and diverse my game library is, I find the thought of a one-size-fits-all option quite appealing.

Taking on the Old Guard

There will always be a backlash against something that deviates from a successful formula, and the Steam controller has already found itself subject to some criticism. Chief among the complaints is the lack of tactile response from the touchpads. While there will be an advanced haptic feedback system to help users know where their thumbs are, critics note that it will never feel as good as pressing a button or depressing a trigger, nor prove as easy to use. There is also the issue of friction to consider. Sliding thumbs across the touchpads for hours at a time sounds rather uncomfortable, especially relative to solidly gripping analog sticks.

Barring some rearranging and ergonomic alternation, the basic templates of gamepads, keyboards and mice have been largely unchanged for many years; why actively seek to hamper people with a gimmicky hybrid? An analogy can be drawn with the QWERTY keyboard layout, originally designed to slow typists down but now so familiar to users that the adoption of a more efficient design would inconvenience more people than it helped (at least in the short term.)

If pressed, even the critics would likely concede that the Steam controller has potential. Take the driving game example from before, yet picture the outer ring of the left pad as a steering wheel, the player running their thumb around it to find a closer approximation than can be found on any controller other than a custom racing wheel. Now consider games with gesture-based features like those in the Trine series. With some context-relevant coding (or even just function-adjusting buttons), the pads could work as direction controls one moment and gesture input areas the next. Since these examples occurred to me, I can reasonably assume that developers and designers could achieve some really interesting things given some time and the opportunity.

Will the Steam controller flop, recognized for its niche appeal but widely ignored, or impress to the extent that programmers rush to consider it while assembling new titles? Perhaps boringly, I expect it to do neither. Assuming the final model has a solid feel and remains comfortable after extensive use, it will likely find a steady place in the market. It will be too expensive (given its sophisticated innards) to be a frivolous purchase but appealing enough for the more adventurous to view it as a technological indulgence.

Regardless of how it does, Valve deserve plaudits for so publicly going against the grain. In doing so, they have demonstrated that they want to shake things up the way they did with Steam (lest we forget, it was originally mocked but ultimately found to have been ahead of its time.) If not an evolutionary leap, then, most likely an opening salvo.