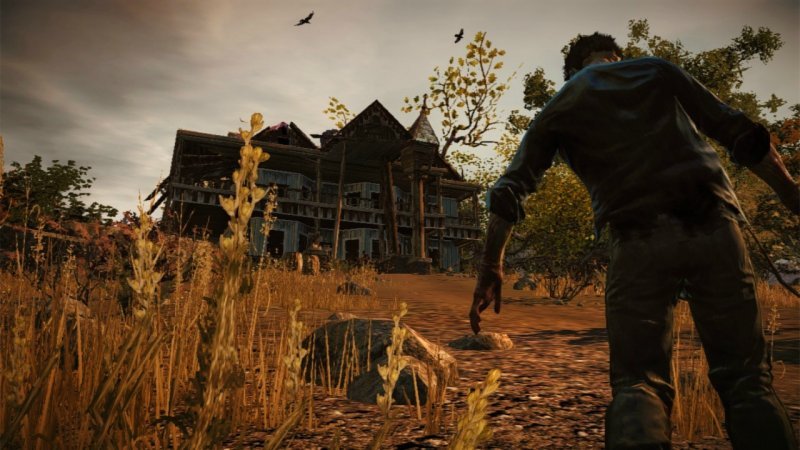 There are all kinds of different zombie games out on the market these days. For whatever reason the zombie genre has never been bigger. What is relatively disappointing is that none of the zombie games bring as much to the table as they could. That was until State of Decay was released onto the XBLA. This game gives gamers quite a bit of the look and feel of the zombie apocalypse and does it in a way that will keep people coming back for more and more. The open world adventure is truly open world and instead of just having to shoot or kill as many zombies as you can, there are things you need to do in order to survive. All of these aspects make the game one that future zombie titles should model themselves after.

Thrust right into the zombie apocalypse, you start out the game as two friends who just returned home after going on vacation. Apparently while you were camping, the zombie plague broke out. The game does two things by starting out this way. Number one is that it does not have to really explain what the heck happened. The second upside of this story telling function is that you get to learn about the world along with the characters.

Modes that teach us how to play the game are always kind of weird and off-putting. By making your characters learn how to get around in the world and what you should avoid you get a bit of a lesson to playing the game without it being quite so obvious that you are simply controlling an avatar in a game.

The open world of this particular game is also truly open world. While you can take on missions, and you are supposed to take on certain missions you get to choose what missions you want. The decisions you make are going to impact what happens to your characters from beginning to end.

What makes this game one that other titles should aim for is the fact that when you are on the missions you need to still make sure that your group is safe and that you have enough supplies. Depending on where you are hiding out and playing your missions there are going to be different numbers of abandoned encampments and campsites.

The story starts out at a camp ground so obviously, there are plenty of fellow campers that have gone “missing” and left their supplies behind. A big part of this game is scavenging. Realism is something that this game strives for, at least in the way it is written and the fact that your characters can actually become tired is a nice touch. You can’t just endlessly run from one campsite to another without paying a price.

The Very Much Needs Improvement

Despite the fact that I actually kind of love this game, there are some things that could be improved. Maybe the next open world zombie game can take the good things about this game and improve about them.

When it comes to the layout of the game the graphics could be better. The faces don’t actually move all the time when characters are talking and that certainly takes away from the realism of the game. That can actually overlooked when it comes to all the other things that make this game so good. One negative I have found when I was playing the game that has got me wondering if I can play this game long term is that the saves don’t really work like they should.  The first time I fired up the game, I left it with my crew trying to make their way to a survivor group at a church.

A few days later when I fired the game up again, they were at the church safe and sound. I understand that the game is written so that if you leave your characters alone in the open, bad things will happen. I suppose we are also supposed to believe that their journey continues.

The second time I turned off the game, my group was outside an abandoned veterinarian’s clinic. When I came back to it the next day, the group was inside the clinic but Ed (one of my group) had gone “missing.”

Making the time in the game continue even when its off is a pretty cool concept. The problem with State of Decay is that there doesn’t seem to a uniform approach. If the makers of the game could iron that out, this game would be one for the ages. As is, it’s still one of the best games to be released on XBLA … ever.