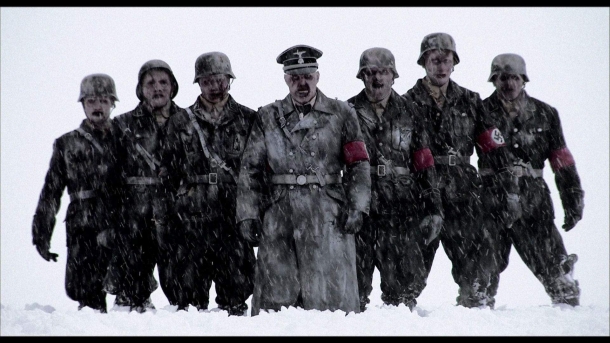 I’m anticipating World War Z to be great. The book, by Max Brooks, reignited my love for the zombie genre. I can only hope that the cleverness within the pages, makes it onto the big screen. If you get to see WWZ and it does for you what the books did for me, you will become a new breed of person- The breed that loves the zombie genre.

The genre is huge and incorporates all types. So, to help you out/mentally scar you forever, the following is a song that inspired a movie, a trade paperback and a horror flick, all centered around zombies.

Hilltop Hoods- Parade of the Dead- Song and Movie

If you’re not a fan of coarse language/HipHop/Rap/People rhyming words/films that aren’t PG, then this is not for you.

‘Parade of the Dead’ is a track from Aussie group Hilltop Hoods and takes you through a journey of ‘discovery’. By discovery, I of course, mean zombie killing.

They also brought out an entire movie with some not entirely bad acting, set in a prison that the survivors are using as a safe house, with the undead milling around outside. It all really just serves as a backdrop for maybe a really long video clip of their entire album. But they’re big fans of the zombie genre and do it justice as best they can.

Again, not PG. Not for the kids. But let’s be honest here, you’ve always wanted to say you have a zombie horror rap film in your DVD collection, haven’t you?

If there is anything for the kids when it comes to zombie genre, this is it! But it’s still spooky and horrifying.

Just when you think you’re in it for a cutesy gore ride, they hit you with some knowledge. It comes completely unexpected, except now you expect it a little bit more than you would have already, sorry. It’s an interesting ‘take’ on the zombie virus and the way humans would deal with a zombie threat.

Totally worth checking out and adding to your zombie collection….Maybe don’t give it to the kids. They’ll only get scared and get jam on it anyway.

Do you love the snow, even after seeing what’s going on north of The Wall? Think skiing is fun? Do you think that Norway seems like a winter wonderland?

DO NOT WATCH THIS MOVIE. It’s too late for me, but you can still enjoy dreams of snowy goodness without waking screaming at the thought of Nazi zombies trying to get their gold.

There also are subtitles. So if you don’t like reading things, congratulations on getting this far in the article, but the movie probably isn’t for you.

It’s a great film, though, because it really plays on the idea of sentient zombies that aren’t hungry, they’re just driven by some unspeakable evil. It’s shocking, horrifying and completely devastating.

I didn’t sleep well for two weeks after seeing it and have refused all vacations that involve snow. I think you’re going to love it.

So, come on….Add in your undiscovered gems of the genre. Let us know about films, books, poems, pictures, comics, whatever it is, that’s redefined the genre for you or simply just added to the awesomeness.