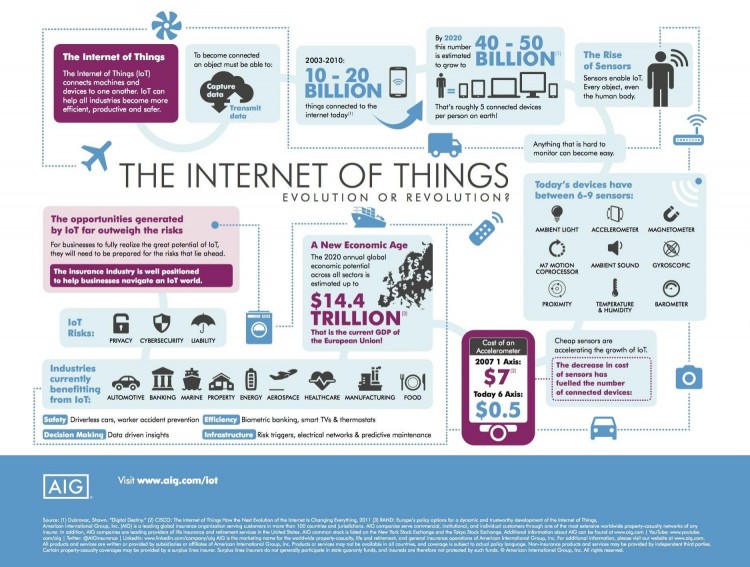 One of the interesting things the report points out is the scale that the Internet of Things works on and the data it produces. This scale is an order of magnitude greater that what we are used to even across the widely distributed Internet. According to AIG, the foundation stone of the IoT is the data generated, transmitted, analyzed and utilized. They state in their report the clear advantage that effective IoT data usage models have, saying that:

“How well an industry or individual company utilizes the massive influx of data unleashed by IoT objects will greatly determine its competitive advantage and future success.” 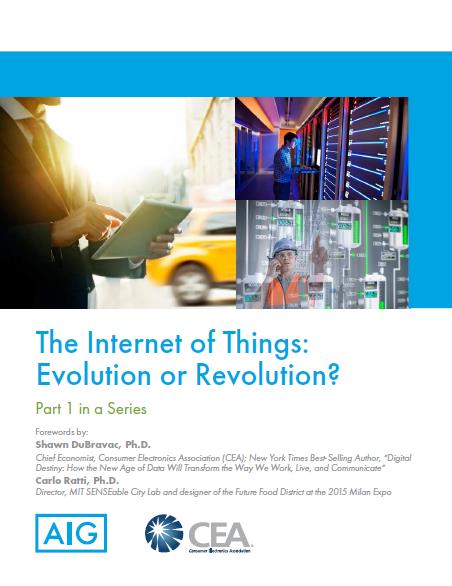 The AIG report uses both a quantitative and qualitative approach to understanding the implications of the Internet of Things. This dual view of the IoT gives us a more 360 degree look at how the IoT and the data generated by the devices within can begin to build a truly connected world.

The AIG report gives us deep insight into the scope and scale of the IoT and builds a picture of an exciting new world where data revolutionizes our lives, giving us the information we need to build more efficient cities, healthcare, transport and much more.

– Some of the numbers involved are staggering. The AIG infographic shows a potential quadrupling of connected devices, from the 10-20 billion today, to up to 50 billion within just 4 years.

– We are talking here about 5 IoT connected devices for every person alive on the planet today.

– Each device has around 6-9 sensors. But the decreasing cost of sensors is helping to drive the uptake of the IoT. As sensor prices drop from $7 in 2007 to 50c today, the cost of an IoT device drops inline, making them affordable and accessible.

– The market size for the IoT is massive. It is expected to be worth $14.4 trillion within 4 years.

The scope of the Internet of Things is only limited by our imagination, and already many industry sectors are using the principles of the IoT to innovate around existing and new products. The AIG report looks at the types of industries directly benefiting from the transformative nature of data driven connectivity, such as:

Healthcare – making us healthier and saving lives: The IoT allows the capture of health data that is otherwise difficult to access, which can then be instantly shared with a physician. AIG points out that the IoT can allow instant transfer of data in emergency situations so that attending doctors know, in advance, what the patient’s condition will be on arrival.

Banking – making us wealthier and creating better bank-customer relationships: The IoT is set to revolutionize the relationship between the bank and their customer. Sharing customer information can help us to closely tailor services to the needs of the customer.

Property – connecting our lives, our homes and our gadgets: Our very homes are starting to connect up. From our smart TV to our fridge, lighting, heating and even garage doors, our domestic lives are rapidly coming under the influence of the IoT. Even the process of selling houses can be data driven. Connected devices using iBeacon technology can be used to inform people of a house for sale as they drive past, even providing full details and floorplans in an instant to a mobile device.

Transport – creating safer transport and saving lives: Connected cars with IoT sensors can improve our safety and overall driving experience. With over 400,000 people in India and China dying in road-related accidents per year, this type of IoT involvement cannot come soon enough.

Food – making food production more efficient: As the planet becomes ever more populated, efficiency in the food supply chain becomes increasingly important. The IoT will revolutionize how we grow, store and transport food. The data being generated can be used to create a more flexible food eco-system. Even farmers can benefit from sensors that ensure watering of crops is done in a more economical manner.

If you google the phrase “knowledge is power” you will come up with a multitude of famous names. This is because the phrase is both poignant and true. In the case of the Internet of Things, it is also highly pertinent. Here “data is power”. The data generated by connected living and working is knowledge. It contains a wealth of information that properly analyzed, can give us deeper insights and drive more accurate models than ever before.

Perhaps most perfectly placed to utilize IoT data is the insurance industry. Insurers know data; it is their core business. They have to use data to model and predict events and outcomes and from this create their products and drive their business. Insurers have to be data gurus. The data generated through the Internet of Things is the next natural evolutionary step and one which can make their business more accurate and efficient. Insurers will be able to take IoT data and create tailored packages, on an individual basis, that properly reflect the risk of that individual. This will benefit both the individual and the company. AIG succinctly sums this position up in their report:

“At the center of this new universe of data will be the insurance industry, which has been using massive amounts of data to understand and mitigate risk. It’s only a slight exaggeration to say that insurers invented the idea of Big Data. Naturally, as IoT objects proliferate and permeate all levels of our economy, it will be the insurers who are best placed to analyze this data and extract meaningful and actionable insights.“

The era of the IoT is an evolution in both data creation and use, but it is also a revolution in how we will live, work and play. 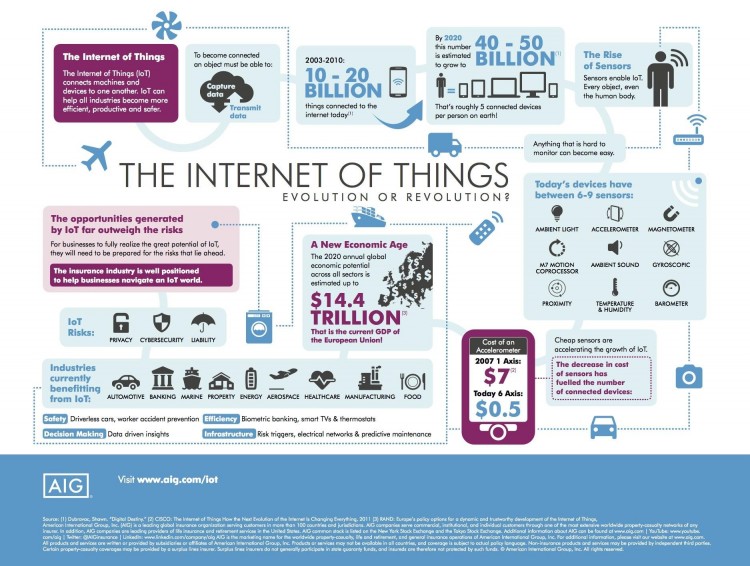 This article is the product of a partnership between Geek Insider and member companies of American International Group, Inc. Although this post is sponsored, the information and opinions expressed in the article constitute only Geek Insider’s own beliefs.