Spielberg at the Center of a Streaming Scandal 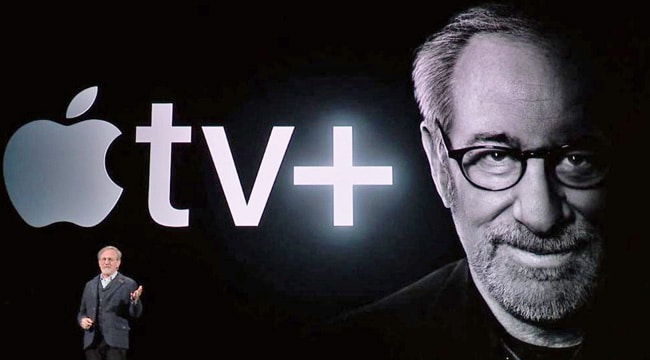 Steven Spielberg has a way of generating headlines. History’s most successful director, with a career spanning more than five decades, he has been widely praised as one of Hollywood’s most prescient and pioneering visionaries. His criticism last month of streaming giant Netflix, coupled with his newly announced collaboration with Netflix competitor Apple TV+, are sure to keep his name in the news. His at-best wishy-washy stance on the issue of how to treat streaming content is symbolic of a broader issue facing the entire film establishment, and represents a crossroads for the industry.

Around this year’s Academy Awards, like so many years in the past, Spielberg has been in the news. After the 91st Oscars, which took place on February 24th, Spielberg came under fire when it was reported that due to the success of Netflix’s film Roma, he had begun lobbying members of the Academy to ban future Netflix movies from Awards consideration. His argument is that feature films released primarily on streaming platforms, with little or no theatrical release, should not be allowed to compete for Oscars. These are not films, he argued, but are instead television projects, and should rather contend for Emmy Awards, which recognize achievements in television. (Straight-to-television films have traditionally been considered television projects and considered for Emmys, rather than Oscars).

The response from across the film landscape to Spielberg’s ideas was condemnation, swift and severe. Critics pointed out that at first glance, Spielberg’s efforts appeared to amount to little more than an old white guy backroom lobbying his friends to prevent inevitable shifts in an industry that is set up to benefit him. Others noted that platforms like Netflix provide opportunities for storytellers who have been traditionally overlooked in the film industry, contrasting Netflix’s impressive track record of partnering with and funding women and minority filmmakers, with Spielberg’s own substantially less inclusive record.

The Challenge With Classifying Streaming Movies

The question of how to treat films like Roma extends far beyond the Academy of Motion Picture Arts and Sciences and Steven Spielberg. Other film industry institutions are grappling with this issue as well. Cannes, the most world’s most prestigious film festival, currently does not consider Netflix-distributed films for awards, because of Netflix films’ lack of screening in French theatres. Award eligibility is a major consideration for streaming platforms like Netflix, with awards season buzz inextricably correlated to film hype and viewership. Streaming platforms are investing billions of dollars in original content, and need to be able to attract A-list stars to compete with traditional studios. Awards eligibility is of paramount (no pun intended) importance to attract top industry talent.

That Spielberg is becoming the poster child for this issue, one that is sure to affect every institution in the movie industry, seemed at first arbitrary. I supposed it could have been any industry insider who got caught in Twitter’s crosshairs for this sort of pseudo-scandal. A few weeks passed since the news broke and I had largely forgot about the issue, assuming that Spielberg and others would simply henceforth be more discrete in their back-room lobbying efforts. Then I caught wind of yesterday’s annual Apple March Keynote, during which the tech giant announced Apple TV+, its own streaming platform launching later this year, backed by $2 billion in original content. One by one, Apple announced some of the industry’s biggest stars, who were to be the inaugural Apple TV+ creators. Among them: Oprah, Reese Witherspoon, JJ Abrams, and, sure enough, Steven Spielberg! Spielberg was eventually given the stage to announce an anthology television series called Amazing Stories, produced by his production company Amblin Entertainment, coming later this year exclusively to Apple TV+. This is a surprising change of heart for the director to say the least, and suggests that there may have been more to his anti-Netflix lobbying than originally met the eye.

Suppose, hypothetically, that members of the Academy indeed took Spielberg’s advice and changed their rules around streaming film eligibility, eliminating Netflix originals and others from consideration. Such a development would have an immediate and significant impact on Netflix’s stock value and perceived viability in the movie industry as a bona fide competitor to the major studios. It would force Netflix to radically rethink their strategy for the future, which currently projects heavy investments in Oscar-hopeful feature films. Such a hypothetical development would, in the short-term, create the perfect market conditions for a Netflix competitor, for example Apple TV+, to enter the streaming market with a focus on television content, not original feature films. Then suppose that a month later, Apple indeed launched its Netflix competitor, and you learned that Steven Spielberg has a financial stake in, and extended creative partnership with, Apple TV+. Such a hypothetical situation would at the very least merit a substantial level of skepticism from the film industry, and may likely constitute a legal conflict on interest on the part of Steven Spielberg.

The extent of Spielberg’s financial stake in Apple TV+ is still unknown. But at the very least, his subversive undermining of an Apple TV+ competitor is suspect. His lobbying against full adoption of streaming movies by the film establishment also appears to be shortsighted. If he sees streaming platforms as a valuable medium for entertainment, as can be deduced from his new partnership with Apple TV+, advocating for rule-changes that will in the long run limit the scope of streaming services seems at the very least myopic. Certainly, Spielberg’s work with Apple may at the moment be limited to a television series; but as Apple breaks into the streaming market and forges strong connections with many of the movie industry’s most prominent stalwarts (Apple TV+ already owns the rights to distribute several original feature films), it is not a stretch to imagine that films are sure to become a future focus.

Ben is a film writer based in Durham, North Carolina, and creator of TheEmotionPictures, an online platform that publishes think-pieces inspired by movies. His writing explores who gets represented in film, and the interplay between the movies and society.

What Is Wrong With ‘Us’?