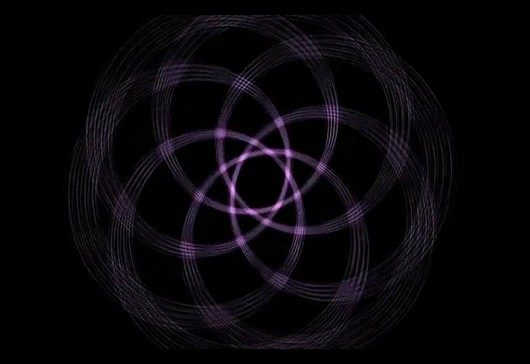 A while ago, I had the chance to play sound designer Robin Arnott’s previous game / sound / artwork, Deep Sea. Arnott’s new project, SoundSelf, also plays with sound and interaction. Mostly simply described, a player uses their voice to create hypnotic visuals, but that’s just the beginning of the experience.

Players make sounds, like humming, chanting, or holding a note like an om, which are reflected in the visuals of SoundSelf. As the player and the program continue to react, the barriers between sight and sound are questioned, allowing the user to experience a meditative state, and exploring the connections between mood and sound. SoundSelf is an hour-long experience. There’s no winning or goal, besides the overarching goal of exploration and enjoyment.

SoundSelf is developed by sound designer Robin Arnott, with Evan Balsters as the software engineer and Topher Sipes as the artistic director. They’ve built a playable prototype, available to try at shows like PAX, but the team is seeking an additional $29,000 in their current KickStarter, in order to make SoundSelf a more immersive, complete experience.

SoundSelf, to me, resembles a computer-aided yoga om. I enjoyed it for the same reasons I go to yoga, although I struggled with the same things I do in yoga… No matter how much I want that peaceful state, it can be very difficult to turn off the mind and stop thinking about a deadline I have later, if I should pick up some milk, that dumb thing I said a few weeks ago, and all kinds of mental chatter. SoundSelf uses sound and visualization to encourage that peaceful meditative state.

I mentioned my inability to stop thinking about what else I have to do today, even when I’m consciously trying to clear my mind to sound designer Robin Arnott. (Hello! I’d like to fully engage your art, but I keep thinking about whether I need to do laundry tonight! Any thoughts?) (Ok, I didn’t say it quite like that.)

“I’m super glad you bring up that challenge of turning off your mind,” Robin said, “because that gets to the core of what we’re trying to do with SoundSelf. I know how difficult it can be to clear your mind, it takes practice and I don’t think anyone can ever get to the point of having totally quiet thought-patterns.” SoundSelf, he says, creates a system of a simple physical task, in this case, making and holding a sound, much the way a yogi might ask students to focus on breathing. This helps encourage players into that elusive (at least for me) meditative mental state. He adds that “reflecting that task in the sound and image helps draw them into the experience, and the strobing lights disengage their critical mind.”

A meditative videogame might seem like an odd juxtaposition. But that is SoundSelf. There is a free, playable prototype available now, and I would really invite you to try it. It’s an almost hypnotic, interactive experience. At the recent Penny Arcade Expo, Arnott says he “really targeted players who were hesitant, who didn’t “get” it. You have to sit down with this for a couple of minutes, trust me. And of course it didn’t get through to everyone, but a surprising amount of players who didn’t have any experience meditating just fell right into it.”

Check it out, and let us know what you think about this technology-aided trance!