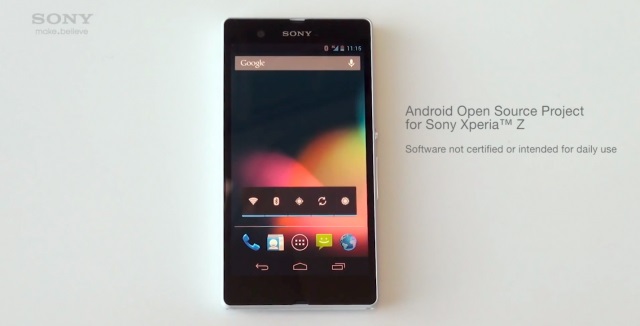 AndroidGeeks claims to have received anonymous confirmation that Sony will be teaming up with Google to launch an Xperia Z Google Edition. The device is expected to be announced sometime in July this year itself.

Sony currently runs an Android Open Source Project (AOSP) for the Xperia Z, which allow users to run stock Android on the device. But this does not guarantee users timely software upgrades. Additionally, it is not simple enough for mass adoption. Thus a Google Edition makes better sense.

The Xperia Z Google Edition is expected to ship with Android 4.2.2 Jelly Bean on board, and will be receiving updates in line with the other Nexus-experience devices (Nexus 4, HTC One Google Edition, and the Samsung Galaxy S4 Google Edition).

As for retailing – like the other handsets, the Xperia Z too is expected to be sold only through the Play Store only. It should remain restricted only to the US market, like the other handsets. Although many of us would want it to retail outside the US, there’s nothing to suggest this will be done anytime soon.

The Sony Xperia Z features a quad-core Qualcomm Snapdragon S4 Pro processor running at 1.5 Ghz. This is complemented with 2 GB of RAM and 16 GB of storage space. The storage can further be expanded up to 64GB with the microSD card expansion slot.

The Xperia Z also boasts of 5 inch full HD display, with a resolution of 1080 x 1920. This display is then partnered with a shatter-proof and scratch-resistant glass. But the more appreciated features of the device include IP57 certification, which means it is dust-proof and water-resistant, up to 1 meter for 30 minutes.

The Xperia Z also comes with a diverse range of connectivity options – it is LTE capable, with Wi-Fi a/g/b/n, NFC, DLNA, and Bluetooth 4.0. It also includes an IR port, but this is not expected to function in the Google Edition, seeing that this was disabled for the Galaxy S4 and HTC One as well.

The camera on the Xperia Z is a 13 megapixel shooter with LED flash and full HD recording capability. Additionally, it includes HDR, panorama, and face detection.

The Xperia Z should hit the Play Store for a price of $599.