Sensors in smartphones, like GPS sensors and accelerometers, help the device understand its own location as well as what direction it is being pointed in. These sensors also have the potential to be able to detect earthquakes in the future.

Can Your Smartphone Sense Earthquakes? 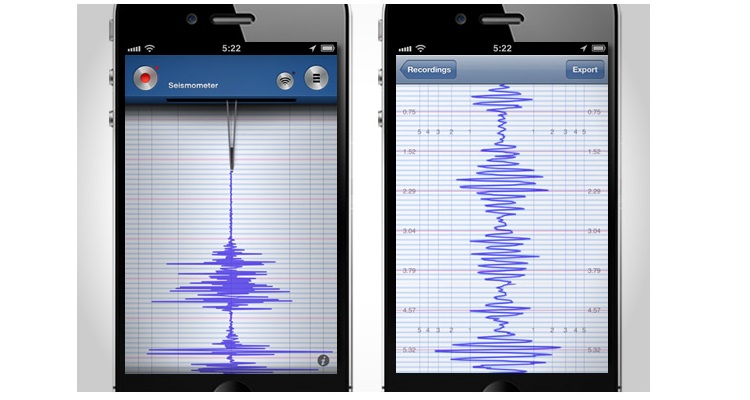 A graduate student from the University of California, Berkeley, named Qingkai Kong wants to put the sensors in these ubiquitous devices to better use. An app has been developed that will “record the shaking during major events and then report the data back to a central server over the cell network,” Kong said in an interview with the BBC. The accelerometer in particular is the crux of Kong’s theory, which discusses turning your smartphone’s three-dimensional motion detector into a seismic wave detection system, or a sort of seismometer.

Despite the fact that this idea is still in the works, researchers have managed to actually be able to detect simulated earthquakes equal to a magnitude of 5.0 in their labs. While this is rather impressive, it still suggests that its detection abilities are not presently as sensitive as they could potentially be in the future. Scientists are hopeful for improved sensitivity with the improvement of the accelerometers that are currently used in cellphones and for the ability to detect smaller events with magnitudes lesser than 5.0 in the future.

There are several obvious limitations to the project, however. Since the project’s aim is more or less designed to sense motion, being able to distinguish seismic shakes from, well, any other kinds of shaking (I know my phone rumbles around in my bag a fair bit) would be nearly impossible. Kong and other researchers have apparently developed an algorithm that can isolate the seismic from the stumbles, essentially subtracting “human noise” from their overall data.

Kong has been quoted saying, “[the] pattern recognition algorithm sees typical human activities such as walking, running and driving, and we use that information to disengage those activities from the earthquake signal.” Kong also added that this algorithm is “rarely fooled.” Another possibility for reducing the “human noise” dilemma could be to have thousands of cell phones essentially working together in hopes that the vibrations from an earthquake could be identified amidst all other external noise, as the ‘blips’ in the readings would logically be consistent if they were truly those of seismic waves.

Jonathan Amos of the BBC wrote in 2012 that “a smartphone seismic network has potential to feed directly into the early warning system,” which has obvious and incredible implications for the possibility of being able to better prepare oneself for disaster if it strikes. Amos said this is “the sort of insight that is useful for future hazard assessment and risk planning,” giving people those precious few seconds that could end up being life-altering. Since California is a region that knows an earthquake could happen at a moment’s notice, Kong’s efforts in his community are significant to say the very least. The ability to know who felt what and where, and to be able to record this information has colossal implications for damage prevention and will give us a better understanding of future seismic activities.

‘The Office’ Inspired Gizmos to Make Your Workday Awesome