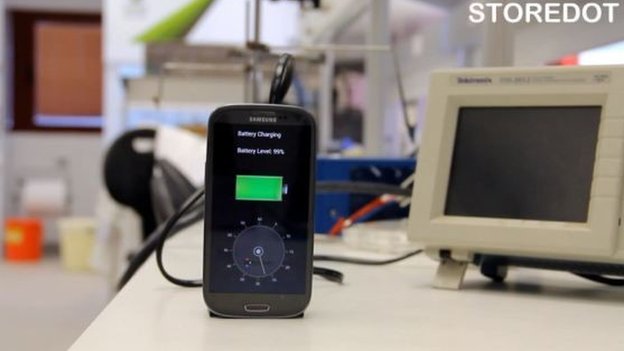 Ever thought you plugged the phone into the charger, and then gone to grab it on the way out of the house and found it unplugged and totally dead? Whether your battery problems are due to forgetfulness or the pesky household poltergeist, they have undoubtedly annoyed and inconvenienced you on more than one occasion. Thankfully, a battery prototype from the Israeli start-up company StoreDot and developed at Tel Aviv University in Israel may one day solve the dead smartphone problem for good. There will be no more waiting forever for your phone to come back to life, as the battery can go from completely dead to fully charged in under 30 seconds.

Zero To Charged In 30 Seconds

The prototype is not just a souped-up ordinary battery; it actually has living properties. That’s right folks, the era of bio-technology is about to begin in earnest. Quantum dots, tiny semiconductors, are set into motion when the battery is plugged into a special charger, drastically speeding up the charging time. Inorganic quantum dots are already an important part of electronics and are used in LED, but they are made out of toxic materials like cadmium, zinc, sulphides, and selenides. The organic, biological quantum dots used in the battery are made out of peptide molecules and have even more potential than their inorganic counterparts. They were originally discovered about ten years ago during Alzheimer’s research, and will have many exciting uses beyond battery charging that may change technology forever.

Sadly, the bio-battery is not yet ready for production or sale. The battery is currently a small pack that can be attached to the outside of the phone, but the company hopes to have it ready to fit inside a smartphone within a year. Currently, the battery only works with the Samsung Galaxy s4, but will be compatible with other smartphones by the time it is released. The product will probably begin production by the end of 2016.

There are still a few problems that need working out. The charger prototype is roughly the size of a laptop, which hardly seems practical. StoreDot is working to make the charger smaller before the product is released. There are also concerns about the stability of the peptide dots, with some claiming that they may be prone to degradation over time, even in standard operating conditions of a phone. The battery will doubtless be put through rigorous testing before its release to ensure its viability for everyday use. When the bio-battery finally does hit the shelves, it will hopefully change smartphones forever.