Simon Kinberg, the writer-producer of the upcoming “The Fantastic Four” and “X-Men: Apocalypse” movies, recently shared info about the two films. What should we expect for “The Fantastic Four?” Will the film be at Comic-Con? What’s the future of the X-Men film franchise? We get answers to all these questions and more. 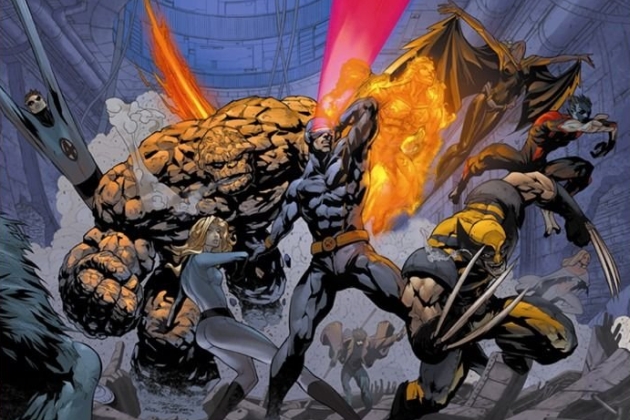 When “The Fantastic Four” was announced, many fans of the superhero team are having flashbacks to 2005 and the semi-childish film rendition of the comic book series. Fear not, for this movie will be “a celebration of all the Fantastic Four comics that have preceded it, ”Kinberg states, and is “not interested in doing something just to use the title as an excuse to do a goofy kids movie.” Audiences will truly feel like they are watching a Fantastic Four movie.  The plot, action, and tone of the movie are not being taken from only one source, but rather from all of the Fantastic Four comics. Fans should expect the optimism of the original comics punctuated with details from the Ultimate Fantastic Four series. Thank goodness. Kinberg also promises that the movie will be unlike any other comic book film.

Unfortunately, the film will definitely not be at San Diego Comic-Con. Creators of the movie want “to really blow people away,” says Kinberg, so due to timing this means we must wait patiently for our first look. Perhaps we will get a surprise when New York Comic-Con rolls around.

Say what you will about the 2013 film “The Wolverine,” the obvious success of “X-Men: Days of Future Past” shows that the X-Men film franchise is headed in the right direction. Kinberg says that, as the writer and producer for many recent X-Men movies, he is being challenged to “make cooler more ambitious films” and “push the envelope.” This can only mean good things for the quality of the films.

Kinberg says that the creative team behind X-Men thinks broadly—they don’t simply focus on one movie at a time. From the beginning, “Fist Class,” “Days of Future Past,” and “Apocalypse” were imagined as a trilogy, with the already-released films providing origin stories for “Apocalypse,” which will now introduce new narratives. “We really want to…track the progression of the world and where do mutants fit in that world,” shares Kinberg, which is why the films are jumping a decade at a time. It’s a risky move to skip so much time from one movie to the next, but the vision and message of the overarching narrative justify it. It won’t hinder the integration of common threads woven through “Fist Class” and “Days of Future Past” into “Apocalypse.” Kinberg explains that “the war for [Raven’s] soul between [Charles and Eric]” will still be prevalent in the upcoming installment. It will also maintain the historical flavor of the other two films.

As for other X-Men movies, it’s possible that Gambit (portrayed by Channing Tatum) could either have a stand-alone movie or be integrated into a team X-Men movie. Also, Kinberg doesn’t think we will have to say farewell to Hugh Jackman as Wolverine any time soon. 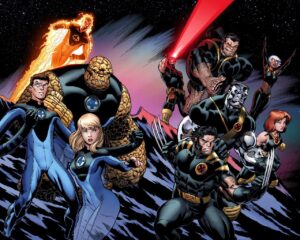 Kinberg says that he “would love to see the X-Men and Fantastic Four team up” because he’s such a big fan of both superhero groups. Unfortunately, there are roadblocks. The Fantastic Four are never mentioned in an X-Men movie, and the Fantastic Four are meant to be unique in their world as well. If it’s one thing that comics are known for, though, it’s finding creative ways around such issues. There has been talk of a crossover, and Kinberg is looking forward to finding a way to bring the two worlds together if given the opportunity.

It looks like both of these cinematic worlds are headed in a positive direction. The movies are being created by true fans: people who care about the stories and characters. This, combined with the many talented actors signed on to each film, can only mean good things. “The Fantastic Four” is set to release on June 19, 2015, while “X-Men: Apocalypse” will hit theatres on May 27, 2016.