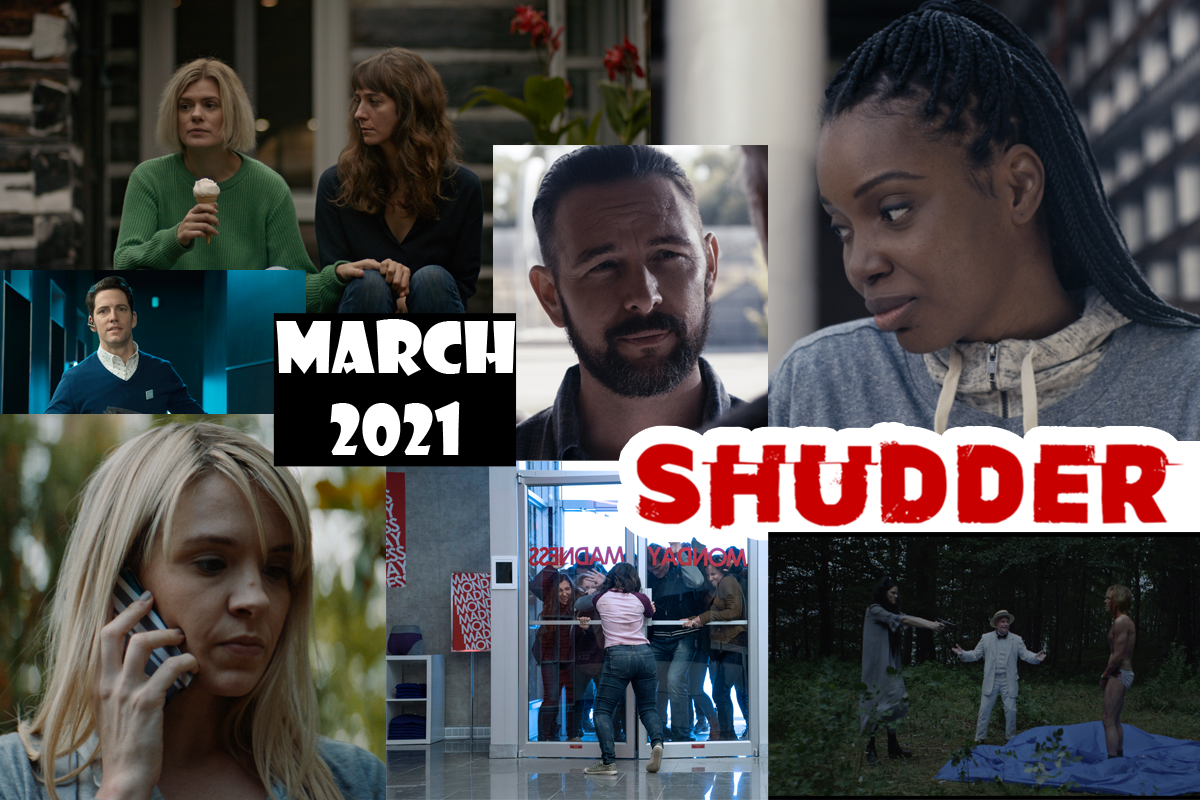 Our Geek friends and fans love a good horror, so naturally we want to keep them happy! Below is the calendar of March 2021 releases that Shudder is adding to their movie library. With so much bloody goodness, how can you resist?

A dysfunctional family moves into a new house, which proves to be satanic, resulting in the demonic possession of their teenage son. (1982, Also available on Shudder CA)

In 17th-century France, Father Urbain Grandier seeks to protect the city of Loudun from the corrupt establishment of Cardinal Richelieu. Hysteria occurs within the city when he is accused of witchcraft by a sexually repressed nun. (1971)

In September, 2020, co-hosts of The Geek Insider Podcast got to sit down with Brea Grant to talk about her graphic novel The Adventures of Mary Shelley’s Great-Great-Great-Great-Great-Granddaughter. A month later, she was releasing 12 Hour Shift, that she wrote, directed, and starred in.

LUCKY premieres as a Shudder Original Film on March 4.

Life takes a sudden turn for May (Brea Grant, After Midnight), a popular self-help book author, when she finds herself the target of a mysterious man with murderous intentions. Every night, without fail he comes after her, and every day the people around her barely seem to notice. With no one to turn to, May is pushed to her limits and must take matters into her own hands to survive and to regain control of her life. Written by Brea Grant, directed by Natasha Kermani (Imitation Girl).

Two men in the early Middle Ages come to a pagan land: one to bring Christianity, the other to find his way of living. In the fight between dialogue and force, one of them will die. (2018, Also available on Shudder CA)

Edge of the Axe

Two mysterious women lure various passers-by to their rural mansion in the English countryside and hold them captive in order to feed on them to satisfy their insatiable thirst for blood. (1974, Also available on Shudder UK and Shudder CA)

After the death of her sister, Elena, a young quadriplegic, retires to a country house with her father and Athos, a Belgian Shepherd Dog specially trained to help her. But the creature who is supposed to be her best friend has contracted a strange disease and has turned into her worst enemy. (2019, Also available on Shudder CA)

An orphaned teenager finds himself being dominated by his aunt who is hell-bent on keeping him with her…at all costs. (1981, Also available on Shudder UK, Shudder CA and Shudder ANZ)

Stay Out of the Attic – March 11 Premiere

A diverse group of ex-cons-turned-movers—played by Morgan Alexandria (Forever My Girl), Ryan Francis (Sisters) and Bryce Fernelius (Ruling of the Heart)—are convinced by their creepy client, Vern Muller (Michael Flynn, The Outpost), to pull an all-nighter for a generous pay bump. As the night progresses and rooms are cleared, they slowly uncover the horrors that exist inside his old Victorian mansion, including boobytraps, human experimentation, Nazi monsters and more. Will they survive the night? Written and directed by Jerren Lauder (Bug Bites).

A family falls victim to a series of violent murders when they invite their neighbors over for Christmas dinner. (2020, Also available on Shudder CA and Shudder ANZ)

While on Christmas vacation, a young man with commitment issues tries desperately to hang on to his relationship when a rival enters the picture. (2020, Also available on Shudder UK, Shudder CA and Shudder ANZ)

Kill or be killed is the golden rule of the Game of Death, which sucks for seven decent-looking millennials who decide to play one sunny day. They quickly and gruesomely realize that if they don’t murder people, their heads will literally explode. (2017, Also available on Shudder CA)

Shakma
Students are trapped with a testy baboon while playing a fantasy game in a research building. (1990, Also available on Shudder CA)

In this highly influential silent horror film, the mysterious Count Orlok summons Thomas Hutter to his remote Transylvanian castle in the mountains. After Orlok reveals his vampire nature, Hutter struggles to escape the castle, knowing that he and his wife are in grave danger. (1922, Also available on Shudder CA and Shudder UK)

The Cabinet of Dr. Caligari

At a carnival in Germany, Francis and his friend Alan encounter the crazed Dr. Caligari. The men see Caligari showing off a hypnotized man who the doctor claims can see into the future. Shockingly, Cesare then predicts Alan’s death and by morning his chilling prophecy has come true, making Cesare the prime suspect. However, is Cesare guilty or is the doctor controlling him? (1921, Also available on Shudder CA)

The Great Gabbo is a mentally unstable ventriloquist who brutally demeans his assistant, Mary, blaming her for the duo’s lack of success. Fed up with his abuse, she quits, only to find herself performing as a dancer in a major stage show featuring Gabbo two years later. Though she is now married, Gabbo makes a play for her. When she rejects him, his madness returns, and he begins to speak only through his puppet. (1929, Also available on Shudder CA, Shudder UK and Shudder ANZ)

A young man turns to a witch doctor to lure the woman he loves away from her fiancé, but instead turns her into a zombie slave. (1932, Also available on Shudder CA, Shudder UK and Shudder ANZ)

A possessed pair of jeans is brought to life to punish the unscrupulous practices of a trendy clothing company. Shipped to the company’s flagship store, Slaxx proceeds to wreak carnage on staff locked in overnight to set up the new collection. Starring Romane Denis (Slut in a Good Way), Brett Donahue (Private Eyes), Sehar Bhojani (The Handmaid’s Tale) and Stephen Bogaert (The Umbrella Academy). Directed by Elza Kephart (Go in the Wilderness).

As an unhappy couple (Leif Edlund, Operation Ragnarok, and Ylva Gallon, Corridor) embark on a camping trip to find their way back to each other, a sideshow artist (Danish rockstar Peter Belli) and his shady entourage emerge from the woods, terrorizing them, luring them deeper into a maelstrom of psychological terror and humiliating slapstick. Directed by Johannes Nyholm (The Giant).

A group of teen girls set out to scare their reclusive new neighbor, but the prank turns to terror when some of them don’t come back. (2019, Also available on Shudder CA)

White of the Eye

Joan White is informed by the police that her husband, a soundman who specializes in high-end audio systems, might be responsible for a series of gruesome murders in their Arizona community. As her husband’s behavior turns violent, Joan begins to suspect his guilt. (1987, Also available on Shudder CA)

A couple in a troubled marriage locate a meteorite, initiating an encounter with a mysterious creature. Their lives are turned upside down by the discovery of the creature, which is a source of both pleasure and destruction. (2016, Also available on Shudder CA)

With her marriage on the verge of collapse, Miriam (co-writer and co-director Madeleine Sims-Fewer, The Substitute) returns to her hometown to seek solace in the comfort of her younger sister and brother-in-law after years apart. In one evening, a small slip in judgment leads to a catastrophic betrayal, leaving Miriam shocked, reeling and furious. She embarks on an extreme course of action to address the situation, but the price of revenge is high and she is not prepared for the toll it takes as she begins to emotionally and psychologically unravel. Co-written and co-directed by Madeleine Sims-Fewer and Dusty Mancinelli (Chubby).

AMC Networks’ Shudder is a premium streaming video service, super-serving members with the best selection in genre entertainment, covering horror, thrillers and the supernatural. Shudder’s expanding library of film, TV series, and originals is available on most streaming devices in the US, Canada, the UK, Ireland, Germany, Australia and New Zealand. For a 7-day, risk-free trial, visit www.shudder.com .