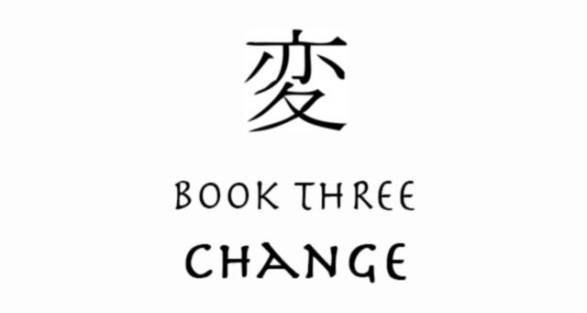 Book 3 is on the Horizon

As you fellow LOK fans have hopefully found out, a trailer for Book 3 (aka Season 3): Change was released pretty recently. For those who haven’t seen it yet, check it out below!!!

As you can tell, there is a lot to look forward to: a variety of new characters, new villains and a whole lot of element bending actions and fight scenes.  Hopefully sometime this summer, the public will be able to see more than just a few clips! Until then the trailers will have to do. Speaking of which, there has been a second trailer release!! It is a mix of some scenes recycled from the first trailer, however they are extended, as well as brand new scenes. Take a look!

Combining the clips shown in both of these trailers, there are definitely some assumptions that can be made and themes present. For starters there seems to be a huge focus on a girl, most likely one of the Book 3 villains, who has the same eye tattoo as the assassin known as Combustion Man in the original Avatar series. The Dai Li organization also make a reappearance, knowing them there is some massive conspiracy to look forward to. There also seems to be a huge emphasis on airbending, seeing as there seem to be multiple airbenders something that wasn’t true in the previous seasons (only Korra, Tenzin and Tenzin’s kids could airbend). Possibly a side effect of Harmonic Convergence? Maybe something else? Either way it definitely promises some interesting fight scenes and, knowing The Legend of Korra‘s style, lots of controversy among the various nations and politicians.

Another huge indication from both trailers is that there is going to be some major back story explanation and focus. It seems that Bolin and Mako, as well as Lin’s past will be getting fleshed out this season. This has a lot of potential as it is a possibility to show what the world was like between the presences of the Avatar. There is sure to be sad and heartwarming moments concerning Bolin and Mako’s pasts, which we already know is tragic as their parents were murdered. As for Lin, from the second trailer there seems to be some anguish and issues, which is interesting as whatever is causing a tough-as-nails character like Lin should be something quite intense. Also seeing what Toph was like as a mother is definitely something to look forward to.

One big addition to the cast is that it seems that Zuko, from the original series, is alive and present in this season! However, he won’t be voiced by Dante Basco, which is sad but understandable seeing as he is somewhere in his eightys. Still seeing a familiar face and from the trailers, Zuko still has some fight left in him. Korra also seems to be working with, or possibly teaching a young airbender, which should be rather interesting as the past two seasons have usually portrayed Korra as the impulsive student. Seeing Korra’s teaching style should be an interesting development for her charecter and most likely, as least initially, a source of comedy as well.

Either way, it seems impossible to top Korra saving the entire world in Season 2, but seeing these trailers it seems that it just might be a possibility! Regardless, these trailers defiantly show that the world of The Legend of Korra is going to go through some tempestuous events  in Book 3: Change!

The King of Monsters: A Look into Godzilla’s Dark Past