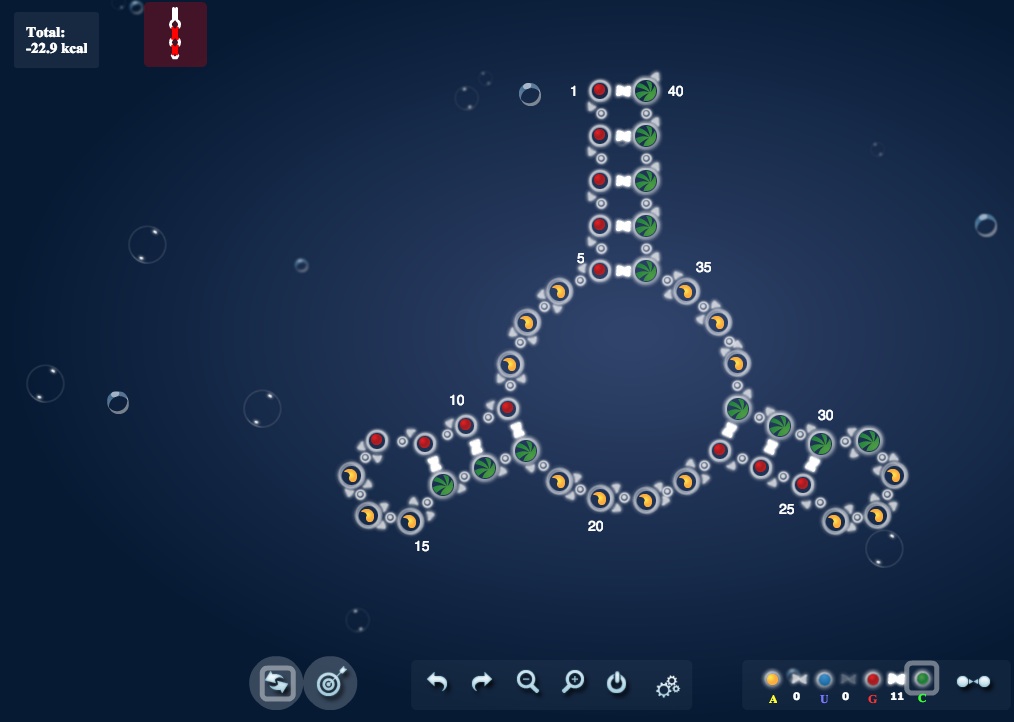 It turns out that even scientists like video games, but not for the reason you might expect.

EteRNA is a game created by scientists to help them explore how RNA, one of the various ways that our body uses to communicate and store data, folds into various shapes. This is important because the way RNA folds determines how it interacts with different elements in the human body. Even a slight modification to a piece of RNA can make it fold in wildly different ways, changing how it interacts within our cells, and what kind of message it tells. Understanding how RNA folds is essential to understanding how our bodies work.

Up to this point, scientists have used computerized design algorithms to try to visualise these folds, but they haven’t done a very good job of it. That’s why a group of researchers from Sanford and Carnegie Mellon Universities decided to go a little bit different route…

What the scientists did is they created a game that tasked players with using the four molecules that make up RNA, guanine, adenine, uracil, and cytosine, to create RNA molecules that folded into specific shapes, then scored them based on how well they did and what substituents they used.

What they got back surprised them. Not only did over 130,000 people join up and contribute over 2,000,000 man hours to the project, but the human generated designs turned out to be better than the computer generated ones. What’s really surprising, though is just how much better people were at designing viable RNA molecules than even the best computerized algorithms were.

So how much better were human designs over the computer generated ones?

It turns out that human generated RNA molecules had a 99% likelihood of being superior to their computer generated counterparts. Not only that, but using what they learned from the community, they were able to design their own algorithm, called EteRNABot, which was almost as effective at generating RNA molecules as real people were, besting previous algorithms by a staggering 95%.

In fact, the project was so successful that it has become an open research project, allowing labs from around the world to submit their own designs. There are even designs that come directly from the community, though these tend to be more puzzle oriented and less likely to generate useful data for the scientists. Even more exciting, though, is that there are plans to create a 3D version of EteRNA to visualize the 3D shapes that RNA can take, allowing the scientists to test even more complex ideas.

All in all, the project has been a great success. So great that Adrien Treuille and Rhiju Das, two of the scientists responsible for the project, are saying these massive online labs could the future of all science, one that can both prevent scientific fraud and increase the likelihood that the research will be truly useful.

All we need now is GladOS to correlate all the data and design all the tests. Wouldn’t that be fun?