Home Geek LifeCulture The Science Behind Why We Heart Emoji
Culture

The Science Behind Why We Heart Emoji 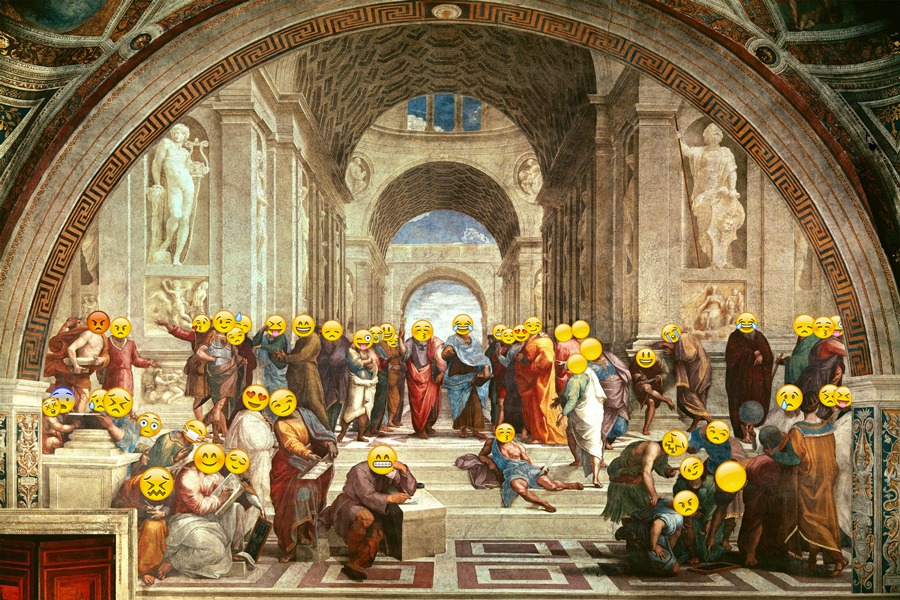 The early 2000s saw the decline of MSN, AOL instant messenger, and N*SYNC, and chat software had its own Justin Timberlake: emoji. The tiny pixel images that make up emoji have had their rebirth from the days of cringe-worthy MSN styles into today’s iconic iPhone set. Twitter now supports emoji for non-iPhone users and desktops. Instagram supports emoji for iPhone app users, while Facebook offers it’s own sets. 95% of texts exchanged by teens contain emoji. When digital trends have come and gone, why have emoji continued to be a necessity?

Putting a Band-Aid on Communication

Emoji make personal communication easier to understand and more efficient to type out. How many times have you put “lol” at the end of a sentence to make it clear you’re not angry, or responded with a thumbs-up emoji rather than actually typing “that’s fine with me”? We don’t have enough emoji to replace all or even most words and phrases in digital text; the efficiency stops at a certain point. But they do an impressive job of capturing lost verbal and facial cues when we have to communicate without them, in the same way that SMS language developed convenient acronyms to conveniently make the mood of a text or forum post clear.

We all know some phrases carry different underlying meanings depending on how they’re said. As Shigetaka Kurita, the developer of the first set of emoji, explains in an interview with The Verge: “If someone says Wakarimashita you don’t know whether it’s a kind of warm, soft ‘I understand’ or a ‘yeah, I get it’ kind of cool, negative feeling… You don’t know what’s in the writer’s head.” Emails and text messages are shorter and to the point by nature, creating a risk of confusion or miscommunication beyond what we may have had with traditional letter-writing.  In an increasingly networked world where texting another native speaker of your own language can still leave you lost in translation, emoji maintain moderately high success in breaking the digital language barrier. Globally, facial expressions and symbols like hearts can arguably smooth out communicating through literal language barriers online as well.

Emoji also have a pretty straightforward use: style. What about adding sun or palm tree emoji to the caption of a selfie you took in Hawaii clarifies ambiguity? It doesn’t, it’s there for style. Just like stickers don’t make your day planner any more efficient, nor are “I <3 My Dog” bumper stickers as useful as “Student Driver” ones, sometimes emoji aren’t actually clearing anything up; sometimes; they’re just there to look good.

Sometimes emoji serve as extra emphasis, not really clearing up any tone confusion, but more than just decoration. One clapping hands emoji vs. a whole row, a single red heart emoji vs. the whole rainbow of emoji heart colors available on iPhones — you get the idea. One emoji would do the trick, but more than one helps convey levels of emotion, perhaps the hardest to do without visual cues or hand gestures. An example observed by Oxford researcher Bernie Hogan, who studies emoji use on Twitter, was the rows of crying emoji that Justin Bieber fans tweeted in response to news of his arrest earlier this year. Tweeting their distress with words and maybe an emoji thrown in would be just as easy to understand, but up to 140 sobbing emoji faces is a strong image, perhaps stronger.

Could Emoji Destroy the English Language?

Let’s be honest, probably not. It likely won’t destroy other languages either. Emoji isn’t actually a language; it doesn’t have it’s own grammar or a correct way to order characters. At most, it can convey simple expressions and replace the occasional word with its respective pixels. Even lengthy narratives “written” in emoji, such as the emoji translation of Moby Dick which was recently added to the Library of Congress, rely on a preexisting understanding of the narrative for it to be readable. If an original narrative was written purely in emoji, it would likely be an incomprehensible jumble of images. It’s a fun way to play with classic literature, but it’s nowhere near a fully-fledged language system.

All in all, your emoji usage is more likely a benefit to communication than a sign of the destruction of human interaction, and they’re certainly not disappearing any time soon. Apple even announced plans to include more racial diversity in its emoji set. So if you’re an emoji hater, you’re out of luck; maybe you can pen your frustration in some snail mail.

Kickstarters of the Week: Pressy & iFind