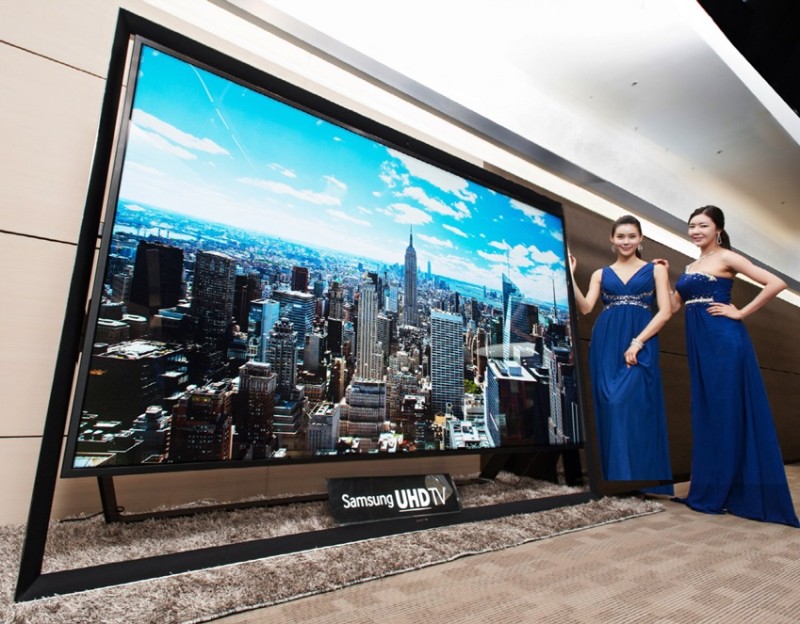 Samsung U-TV Is Bigger Than Ever

Samsung’s new TV measures 8.5 feet by 6 feet making it the largest television of its kind. It will be sold in China, the Middle East and Europe.

Manufacturers are moving toward ultra HD TVs because they are in higher demand and are less costly to produce. The original thought was that OLED TVs were the future. They have ultrathin screes and display images with improved clarity and deeper color saturation. However, Samsung and LG’s hopes fell short. The OLED TV did not become as popular as they had anticipated. LCD TVs are still in higher demand.

U-TVs are expected to have a better turnout than OLED TVs. Although they currently lack in programming, the demand for U-TVs is expected to increase from 1.3 million this year to 23 million by 2017 according to NPD DisplaySearch. To expand programming, Samsung struck a deal with Netflix, Comcast, Paramount, Fox and others in order to bring 4k video to U-HD TVs. The U-HD TV requires 4k video, which means that it contains four times the pixels of an HD TV – 1080p. When Tim Baxter, president of Samsun Electronics America, announced that they would be partnering with the NA and Pro Golfers Assn., he asked Mark Cuban, owner of the Dallas Mavericks to speak on the subject.

”All that extra resolution, all those extra pixels, will be used for gaming and untold extra things developers will come up with. It’ll turn the TV into a unique ultra-high-resolution platform, and the possibilities are endless,” he said.

Several television shows and movies are being converted to 4k video so that they can be played on the U-TV. For example, Paramount is working on feature films such as “Star Trek” and “Star Trek Into Darkness,” “World War Z,” “G.I. Joe: Retaliation” and “Forrest Gump.” Netflix is working on “House of Cards” and other titles. Last month, Amazon announced its plans to create an original series in 4k HD. Kyungshik Lee, senior VP of Samsung’s Visual Display Business said the U-TVs will not only deliver the best quality of television but also the best content.

This year “will be a breakthrough year for Ultra HD, and it is important to deliver on not only the top-of-the-line products but also great content to fully enjoy the benefits of Ultra HD,” Lee said.

In addition to the U-TV, Samsung also introduced a 105 and 78-inch curved screen U-HD TV and a “bendable TV” which switches from flat screen to curved screen. This is useful because curved screens reduce glare and make the screen look bigger. Samsung also announced new tablets: the Tab Pro and Note Pro. The tablets will have higher definition and be seen as more or a portable television.

Everyone is hopping on the ultra HD TV bandwagon and contributing to its debut. In the future, possible all video will be in 4k HD and the demand for U-TVs will surge within the next three years. Either way, all of the Samsung products are growing fast. Hopefully the U-TV will come to American soon. Fingers crossed!