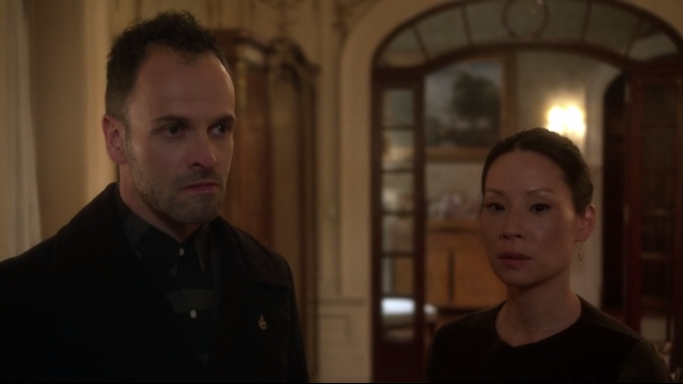 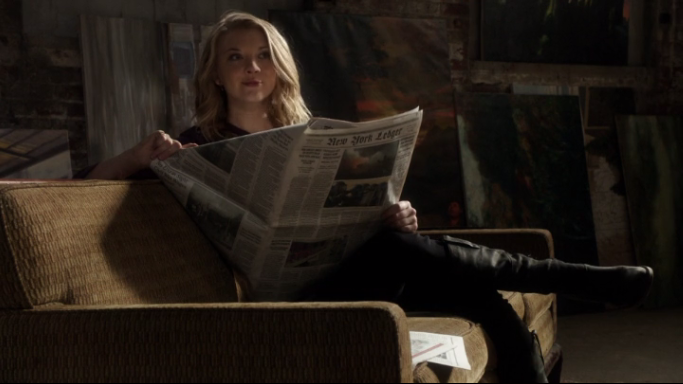 The winter break is over, and there’s a foreboding chill in the air as Elementary returns this week, and in that blast of cold wind something wicked the NYPD’s way comes– Jamie Moriarty is back.

The kidnapping of Caden Fuller, a young girl from a British “old money” family living in the city, brings Joan and Sherlock to the case. When the kidnapper calls, Sherlock recognizes his voice: the same voice of a man who claimed to be Moriarty, and who Jamie eventually revealed to be one of her lieutenants. Realizing that Moriarty must somehow be involved, he urges Capt. Gregson to get them a visit with the spider in her newest web of deceit–after all, he knows for a fact he’s on her guest list.

Having already essentially admitted mutual contact, Sherlock shows Joan his collection of correspondence with Jamie, claiming “for science” as his motivation for continuing to speak with her (to which Joan rightfully calls bunk). The two of them (and Gregson) receive permission to visit Moriarty in her “more comfortable digs,” i.e. a federal-owned warehouse turned private prison. They’re met by Captain Robau–sorry, Agent Mattoo–and Mattoo explains that, though Moriarty has been trading information for comfort, she’s not that comfortable; she only gets her glass jars of paint and a copy of the daily Ledger— and wow, can she paint, because that’s a big, creepy portrait she’s obsessively painted of Joan. Somebody’s got a hatecrush on the detective who “solved” her.

Moriarty trades the name of her lieutenant, Devon Gaspar, and a sketch of his face, along with those of his likely associates, for becoming a “consultant” on this case herself, though she has to wear taser-bracelets to keep her in check. Sherlock chases down the names and faces that Moriarty provided, while Joan and Moriarty investigate the scene of the crime. Jamie, frustrated by Joan’s ability to read her while she can’t do the same to Joan, begins throwing down some serious barbs–all essentially referring to Watson’s place in Sherlock’s life as temporary. She claims Joan is a puzzle both she and Sherlock will move on from once they’ve solved. If she thinks she’s truly Sherlock’s friend, she’s mistaken; Jamie is the only one who can truly understand and connect with Sherlock, and in the end it will just be him and her, and Joan will be forgotten. 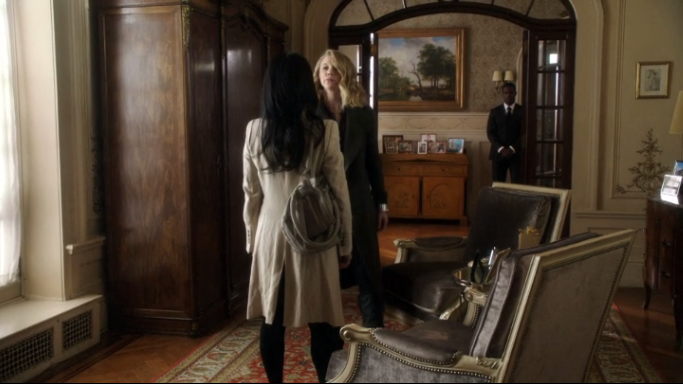 Sherlock, meanwhile, has had no success in confirming any of the identities Moriarty gave them. He has a short discussion with Joan where she sympathizes with his remaining feelings for “Irene,” but reminds him that Moriarty won’t change who she is. People change because they want to change, not because someone else loves them. Meanwhile, two NYPD policemen are murdered and one of their cellphones (with the sketch-images Moriarty provided) is stolen. Sherlock realizes that Moriarty always intended the sketches to reach Gaspar, and that she’s hidden a message inside them–coordinates on the island of Svalbard.

Gaspar calls the police station and reveals that he knows they’re working with Moriarty. He puts Caden on the phone so Gregson, Joan, Sherlock, Agent Mattoo, and Jamie can all hear her begging for her mother. Mattoo re-incarcerates Moriarity back at the warehouse for passing along information to the kidnappers. Of course Sherlock realizes that, if she was collaborating with Gaspar, the communication must have been two-way. Since the only conveniences Moriarty received in prison were her paints and the New York Ledger, Gaspar must have left a message for her in the Ledger somewhere. He admits to Joan that she was right earlier–he does, upon occasion, entertain the ridiculous notion that Jamie could change; after all, he did, with Joan’s help.

Meanwhile, Joan can’t quite put Jamie’s reaction to hearing Caden’s begging out of her mind. Having been on the receiving end of that look, Joan is quite certain that Moriarty was murderously furious with Gaspar–and it wasn’t the sort of look you give someone with whom you’re in cahoots. Sherlock finds a cipher buried in the paper’s advertisements and realizes Joan was right; Jamie isn’t the mastermind, she’s the victim. The coded cipher reads: “You know what I want, tell me where it is. Be prompt; your daughter’s life hangs in the balance.” Caden is Jamie’s biological daughter.

At the warehouse, Moriarty uses the glass from her jars to incapacitate her taser-cuffs and cut out her tracking chips, escaping. She incapacitates Mattoo and goes to confront Gaspar at one of her old hideouts. She murders him, and everyone else involved in the kidnapping plot. Then–she calls Sherlock to take her back in! 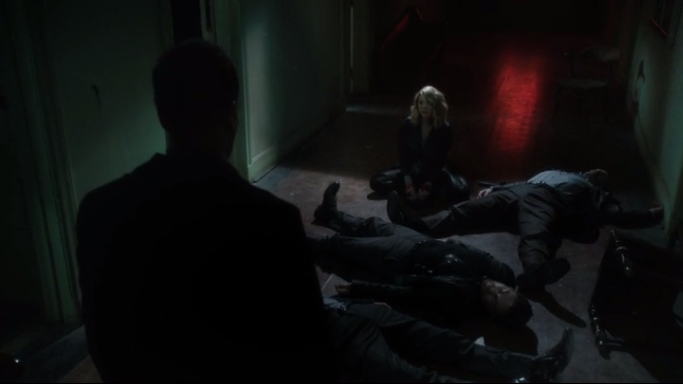 When Sherlock arrives at the abandoned building, he finds Jamie alone. She sent her daughter away–presumably back to the Fuller’s. She confirms that Caden is her daughter, but was conceived well before she met Sherlock. The coordinates in Svalbard that Gaspar wanted she admits were fake. Gaspar is looking for her dossier, an index of “interesting” facts she uses to plan her crimes, some of which were passed down by a mentor with the same “enthusiasms.” She explains she’s allowing Sherlock to take her back in because she doesn’t want to live as a fugitive when she’ll be free soon anyway. As for why she didn’t kill Mattoo? Well–She realizes Sherlock would have thought badly of it. She wonders if that’s how he has learned to live amicably with society–by learning to care how his actions look in the eyes of Joan. Sherlock admits he’s not sure he can live amicably with society.

How do you feel about Moriarty being displayed as more sympathetic? Can she be trusted? What’s her obsession with Joan? Let us know below!

Samsung’s U-TV Is The Future Of Television