Home News Samsung TV Owners: Are You Being Watched Through Your HDTV
News 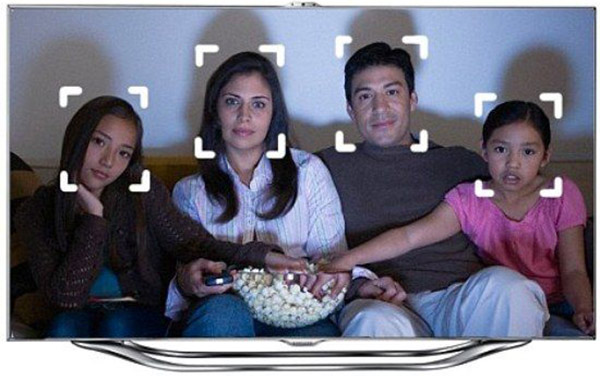 Are you being spied on in your homes by your television sets? If you own a new Samsung TV, you may very well be. The latest TV models raise serious cause for concern, as hackers have already proved that these TVs are not secure and privacy policies have not yet been released.

Samsung’s2012 plasmas and LED HDTVS offer features that were never before available for televisions. They each have a built-in, internally wired HD camera, twin microphones, face tracking and speech recognition. These features are intended to give the owner control over their HDTV, like on one’s personal computer. However, these tools also, obviously, make the models easy hacker prey. Hackers or even Samsung can see or hear your family and collect personal data, and face tracking, the controversy of the Google Glass, could make researching a person’s identity and past quite easy. So they could spy on you, figure out who you are and then well who knows from there. Yes, it is creepy and a problem, Samsung.

Now, HDTVS have had internet connectivity and web cameras before, but they were never quite as connected as these. The newbies have cameras and microphones that stay constantly connected. Plus, they also have the option of installing third-party applications and Samsung’s own software, allowing hackers access if they go through the apps. Aaron Grattafiori an analyst at iSEC, explained, “If there’s a vulnerability in any application, there’s a vulnerability in the entire TV.” Worse, Samsung has not even released a privacy policy. There’s no official statement on what data they are collecting and sharing from their TVs . Technically, I guess they could be collecting right now…  and if any little app gets hacked, there are going to be issues. Internet security research firm iSEC Partners actually successfully hacked into the TVs Web browser and camera easily. Yavor and Grattafiori, of the company, were even able to redirect the viewers to any website of their choosing (could fake a banks website for example).

Senator Chuck Schumer of New York wrote a letter to Samsung, LG, Sony and other companies asking for new security protocols to be set that will protect users. He wrote, “I was disturbed to read recent reports of hackers exploiting new features in television sets in order to break into the home entertainment systems of users and spy on unsuspecting channel surfers. For a TV to secretly function as a spycam would violate a fundamental expectation of privacy in the American home.” Agreed, sir.

Samsung did state on television that:

Samsung takes all concerns regarding consumer privacy and information security very seriously, and we have released a software update to resolve this issue. In addition, the camera can be turned into the bezel of the TV so that the lens is covered, or disabled by pushing the camera inside the bezel. The TV owner can also unplug the TV from the home network when the Smart TV features are not in use. As an added precaution, we also recommend that customers use encrypted wireless access points when using connected devices.

So basically they want us just to not use the cameras and deal with this ourselves. I don’t like this, and I don’t like how easily iSEC was able to hack in and take control. Let’s hope the newer models adjust to these security threats and that some new precautions are put in place.

Well lately, we’ve received news that the United States government is collecting information from phone calls and electronic transmissions. Hackers can get in our unsecure cameras and watch us (yes, maybe on your computer right now, according to former NSA software developer Craig Heffner ). I mean, hackers can even manipulate your car while you’re driving it! So maybe it’s not that scary that our TV could be watching us too….or maybe it just adds to the general security terror that is coming with this “smart” age.

Flipboard Gets Blocked in China