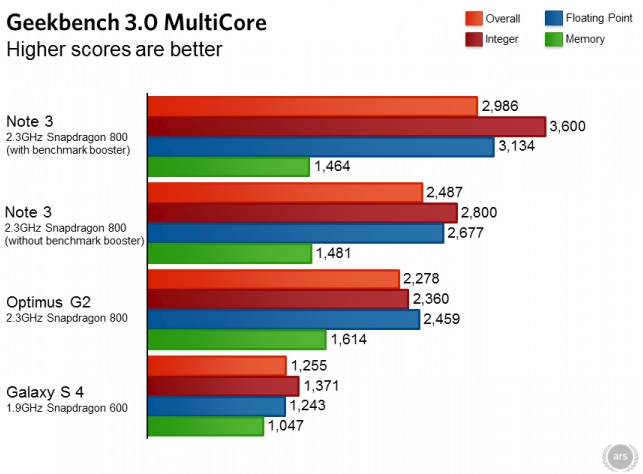 Samsung has been caught in the act again. Adding to its list of incidents involving bad publicity, the Korean Android giant has been found to be boosting benchmark scores on its Galaxy Note 3 to gain an edge over rival phones. 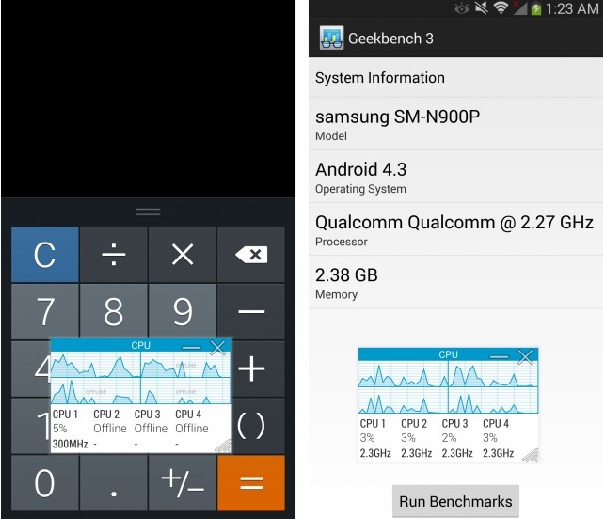 The folks at Ars Techina made some unlikely and unusual observations while playing with the Samsung Galaxy Note 3. Even though rival LG’s G2 flagship runs on the same Snapdragon 800 processor clocked at exactly the same rates as the Galaxy Note 3, the latter seemed to be beating the G2 by a mile on benchmark tests.

Using a CPU monitor app, Ars observed that the Note 3 shut off 3 of its core when idle, with the fourth core clocking at 300 Mhz. Pretty normal behaviour for a phone. But, put on a benchmarking app and all the 4 cores would race up to 2.3 Ghz – and would maintain that speed, non stop.

Keeping an Eye Out for Benchmark App Names

A bit more snooping uncovered the reason behind this behaviour. The Note 3’s special benchmark CPU mode is triggered when it detects popular benchmarking app names in the apps that it runs. Apps containing packages named Geekbench, Quadrant, Antutu, Linpack, GFXBench all lead to a spike in CPU activity, giving the Note 3 a considerable lead over its rivals.

As it was discovered – the same apps with a renamed, but same, package are treated like any other app by the phone – the benchmark scores then fall back to the Earth and seem a lot more real. The Ars team has evidence to support this – a file, called “DVFSHelper.java” contains a list of all package names for apps on which the boosting process is activated – all of them are names of popular benchmarking apps.

When Samsung was caught for the same reasons on its Galaxy S4, the company issued a formal replying defending such behaviour, saying the boosting also occurred when running memory-intensive apps such as the browser, S Voice, etc. While the DVFSHelper file does contain custom settings for apps like the Camera and Gallery, the names of the benchmarking apps are specifically singled out in the file.

Running the same benchmarking apps without the artificial boosting, it was observed that the boosting was giving the Galaxy Note 3 an increase of 20% across almost all benchmarking scores. On Linpack, another benchmarking app, the increase was as high as 50%.

Should We Trust Samsung At All?

It isn’t just boosting that Samsung indulges in. The company has quite a track record for bad press. Early this year, the company caught paying students in Taiwan to post negative reviews about its rival HTC’s phones, and promoting it’s own phones instead. Prior to the incident, Samsung was fined about 300,000 Taiwanese dollars (about $10,000) for misleading advertisements relating to its phones.

Samsung launched the Galaxy Note 3 along with the Galaxy Gear smartwatch at the IFA Berlin this year. With this being the second offence for Samsung, reviewers are going to take Samsung’s performance claims with a fair grain of salt.