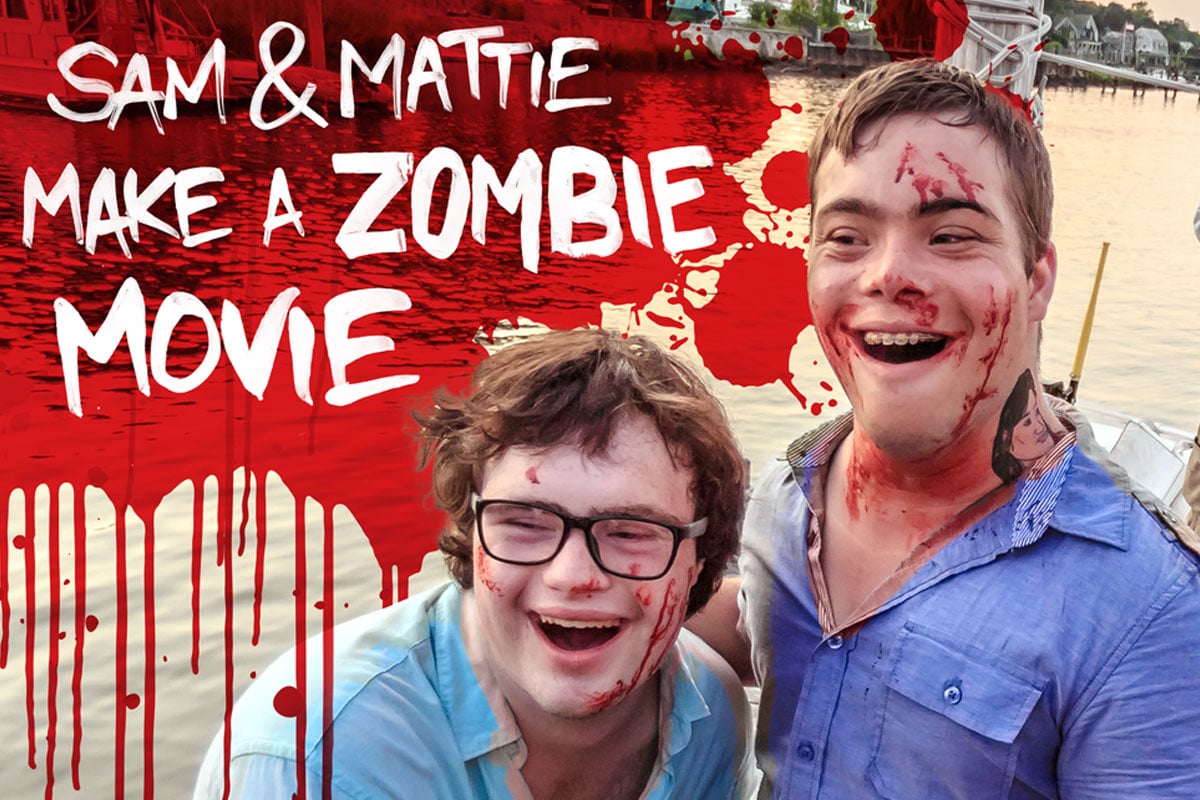 What happens when two best friends with Down Syndrome rally their hometown of Providence, RI to help realize their dream of making a horror film? The documentary Sam & Mattie Make a Zombie Movie captures this inspiring story of unfiltered optimism and barrier breaking, overflowing with gallons of fake blood and DIY spirit.

Sam & Mattie Make a Zombie Movie is now available on a number of digital and cable platforms, including iTunes, Amazon Video, Vudu, Google Play, Spectrum and Cox from Gravitas Ventures.

“I don’t think I’ve ever smiled more while watching a movie in my life,” says Oscar-winning filmmaker Peter Farrelly (Green Book), who serves as executive producer. “Sam and Mattie are superstars!”

Since they met at the Special Olympics, Sam Suchmann and Mattie Zufelt have forged an unbreakable bond fueled by their passion for movies. Sam and Mattie pitched their idea of the ultimate cinematic experience to all who would listen: a racy teen zombie flick they proudly proclaimed would be “the greatest movie ever,” exploding with sex, gore, and more over-the-top violence than you can shake a machete at.

They convinced Sam’s older brother Jesse and his band of filmmaking friends to join them in bringing their film to life. The only rule: the duo’s original artistic vision must remain intact. This meant Sam and Mattie would storyboard, script, produce, cast, and star in their dream project: Spring Break Zombie Massacre.

“This is just one of those magical stories,” says co-director and director of Spring Break Zombie Massacre Bobby Carnevale. “We started out thinking we’d be filming their movie with iPhones and ketchup, but Sam and Mattie’s big dreams were infectious, so everyone offered to pitch in. The fact that we ended up with such an incredible film proves that when you bring the right people together, you can do anything.”

With Jesse narrating the journey, Sam & Mattie Make a Zombie Movie chronicles the unique and often emotional challenges of this independent film production and the unexpected triumphs along the way. Living the dream finds the team launching a successful Kickstarter campaign, attracting the attention of Farrelly, and landing television interviews all over the country, including a raucous guest spot on Conan.

The documentary culminates in the ultimate payoff: presenting Spring Break Zombie Massacre to the world.
Proudly unconventional, totally honest, and a little punk rock, Sam & Mattie Make a Zombie Movie spotlights an underdog story like no other. It shatters disability stereotypes and celebrates the creative power of neurodiversity. Ultimately, the film challenges viewers to reach for the stars themselves, echoing Sam and Mattie’s personal mantra: “Rock on, go wild!”

The Boy Behind the Door