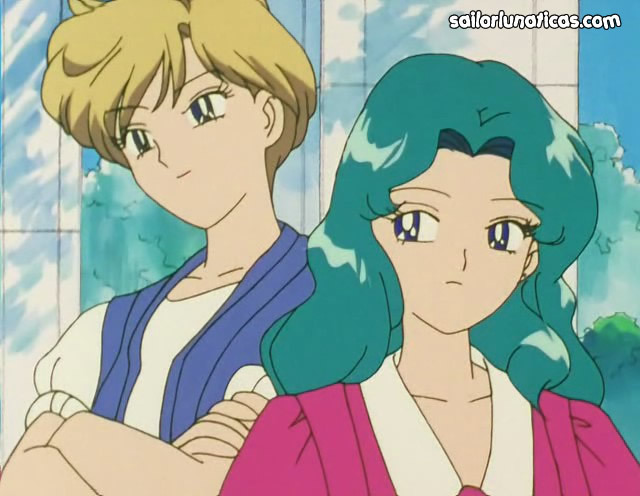 Everyone and anyone who watches Sailor Moon, no matter what the season, knows that Amara (Sailor Uranus) and Michelle (Sailor Neptune) are nearly conjoined at the hip, Siamese twins, inseparable. Practically…a couple? It’s quite obvious that these two are the best of friends and will never leave the side of one another, but is there more going on than the fans would have expected? After all, they are “cousins”, right?

Lesbian-romance themed anime and manga is known as yuri, and there is no opposition to homosexuality in Japan.  There are many LGBT (Lesbian Gay Bisexual Transgender) anime and manga series to this day being aired in Japan, such as Bara (genre), Boku no Pico, Cardcaptor Sakura, Kuso Miso Technique, MW (manga), etc. A character’s sexuality in a manga’s or anime’s plot is, oftentimes, if not all, the center of the character’s focus; homosexuality, is, at the very least, uncommon. Although, more often than none, when an anime series is aired in America and is dubbed in English, when translated, the sexual innuendos are wiped away and are made “kid-friendly”.

Sailor Uranus and Sailor Neptune are complete opposites so, of course, at first, it would be questionable as to how they would even be related, remotely. Amara Tenoh is a charming, stubborn 5’9″ stud, who drives racecars and dresses is men’s attire. Michelle Kaioh is a graceful, delicate feminist violin prodigy who is a member of the Swimming Club. In nearly countless amounts of episodes, one can view an abundance of feelings between the two in the English dubbed series, whether it be Michelle’s jealousy of Amara’s new friend or Amara’s overprotection of Michelle when she gets fatally hurt from battle. Although, in the original series aired in Japan, the two are constantly seen flirting, cracking sexual jokes, or even….kissing? If a true Sailor Moon fan has not, at the least, caught a glimpse of the kissing scene between these two “cousins”, one should at least be aware of the kiss between Sailor Uranus and Sailor Moon (Not too sure how Tuxedo Mask would’ve taken it).

If their first time meeting never tipped you off, especially the raging chemistry between the two, maybe you should take a closer look.