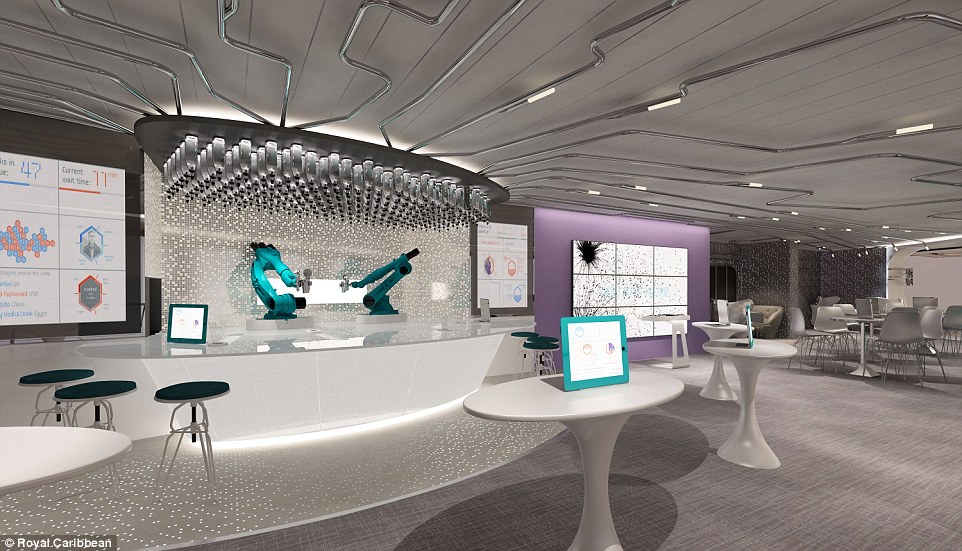 Picture this: You are on vacation, on a cruise ship. You walk up to the bar for a drink, but instead of being greeted by a smiling bartender, you have your drink prepared by a robot. Well one particular cruise line is planning on making this a reality.

The Future of Cruise Lines?

Royal Caribbean plans on incorporating robotic bartenders on its new futuristic ship, Quantum of the Seas. The robots will be mixing your drinks behind the “Bionic Bar.” To order, you make a selection on a tablet, which is then sent to the Bionic Bar, where your beverage will shortly be waiting for you.

Whether or not this is the future of cruise lines remains to be seen, but Royal Caribbean has been a pioneer in the industry, being among the first to introduce unique forms of entertainment, and novelty on a cruise ship. From zip lines to rock climbing, chances are pretty high you won’t be bored on one of these floating cities. Are robotic bartenders the next big thing? Royal Caribbean seems to think so.

If you are expecting Mr. Johnny Five behind the bar, I’ve got some bad news for you. These are not any kind of humanoid type robots. Royal Caribbean chairman Richard Fain elaborates to USA Today: “It’s a single arm, and it will go get the ice and the mints and the lemons, and it will squeeze them and shake them.” In all honesty it looks like the robot arm of an automobile manufacturer’s line.

It can be argued that losing the human touch at a bar, diminishes the experience. Having an approachable and cheerful bartender makes the experience pleasant for everyone. You want to come back, and order a drink, or have small talk. You might even get a free drink on your birthday. You can’t say the same with a robot.

Of course, there are two sides to every story. Not every bartender is pleasant, and while it is no fault of their own, on busy nights, it can be a challenge to get to every patron in a timely manner. A copious amount of patience is required. If you are ordering on a tablet, you don’t have to worry about trying to get the bartenders attention. Will incorporating machines to do the job increase proficiency? Will you get your drink faster? Maybe. Is it worth it? That depends on your perspective.

If you are the business owner, you don’t have to pay robots any kind of salary, but it’s not like human bartenders rely heavily on salary. They rely on tips. And if the business skims a certain percentage of tips, they would lose money with robots. I doubt anyone would want to tip a machine that is programmed to do something.

If your goal is to just get your drink quickly, then bypassing human interaction might be for you. But let’s be honest, 9 times out of 10, you go to a bar to interact with other people. If you just want to drink and not talk to anyone, you can do that from the comfort of your own room. Of course, if you are among a group of friends, you probably don’t want to spend too much time at the bar, just grab your drink and return to your circle. In which case, that’s another plus to ‘bots.

There is also the element of human error. Some bartenders might make a drink a little too strong, others a little too weak. With a machine, you will get the same drink every single time. While that might sound good to some, it might sound boring to others. And then there is judgment. A bartender can usually tell when a patron has had too much to drink, and has the ability to cut them off. A machine will only be able to tell you exactly how much alcohol each drink contains, and since every person is different, the point of inebriation is different as well. So unless you are inputting height, weight, age, and what you had for dinner that day, how will a robot know when to stop serving a patron?

Robot bartenders are an intriguing idea. One that will not likely take off overnight. But with the sophistication of software and hardware increasing on a regular basis, in 20 or 30 years, could we see a mix of human and robotic bartenders? Nothing is ever certain.