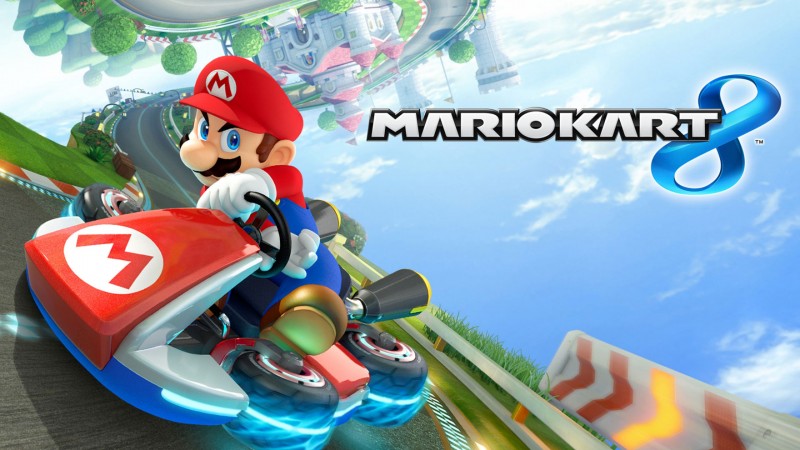 Ever since the Mario Kart franchise first came out, the gameplay has always been something that has made the titles usually stand out head and shoulders among other “racing” type games. Nintendo’s most recent serving of Karting action doesn’t stray too far away from that formula…in fact, it is one of the better versions. However, there are a few things that prevent this entry from being—nostalgia aside–arguably the best.

First off, the character selection doesn’t necessarily size up well with those we’ve seen in past entries. Sure, you’ve got some of the traditional choices such as Mario, Peach, Yoshi, and Donkey Kong (to name a few), yet others are just plain silly. The excess amount of baby characters and especially Pink Gold Peach come to mind here as they seem to be somewhat of a “cop out” and could have easily been replaced with other characters that actually existed in games prior to this release. This isn’t to say that some of the character additions aren’t great as the inclusion of the Koopalings is awesome!

Another small dent would be the amount of tracks as while there is a decent helping to wet our appetites, in the end, it almost leaves you craving more. In some ways, it almost feels like Nintendo has left the door open for possible DLC…which I’m sure I am not alone here when I say that would be welcomed with open arms provided they fix the aforementioned issues.

While other individuals may have a few more common complaints or gripes here and there, ultimately, in my opinion, the rest of the game is quite incredible and makes it—as mentioned—almost a perfect entry in the franchise. It’s a great racer that the whole family can easily pick up, play, and enjoy. As long as this disc is wedged in your console, there will be no shortage of fun to be had!

Aside from the gameplay, this is probably the most standout feature of the game…the graphics are nothing short of gorgeous. All of the characters look astounding and full of personality in the glorious HD resolution that we’ve been offered with this release. The tracks look phenomenal and are so involved and animated that you may often find yourself distracted from racing because your eye caught a glimpse of something occurring within your surroundings. Seriously, the graphical upgrades on some of the older “retro” tracks are a real treat and will leave fans of the series—such as myself—drooling and wishing they’d do this with even more. I won’t say that the graphics push any boundaries, nor do they push the system itself to the limit, however for what it is intended to be, they nailed it. The only way things could be any better here is if the visuals were in eye-popping 3D. Maybe one of these days.

In short, the multiplayer mode—both local and online—is fantastic and nothing short of a blast when it comes to being able to race against friends and family. However, while there are a few improvements from its predecessor, there are some areas where beneficial changes could have been made. For example, the main complaint hovering around the reviews and thoughts of other’s is that the Battle Mode in this release has suffered a great loss by eliminating the use of arenas. I happen to agree with this popular opinion as they should have simply left this feature alone and not tampered with it.

Instead of the traditional arenas—or circular/boxed in courses—for Battle Mode, we are greeted with playing a game of “hide and seek” on the regular racing courses. It can literally take quite some time to find someone as you ride mindlessly through a course collecting items and waiting impatiently to target someone. Not only that, but you don’t even get to choose from a large quantity of the tracks for this feature as the selection is limited to eight. Part of what made Battle Mode so fun in the older entries was being able to see your opponent on a radar and hunt them down in an enclosed area. This is not the case though in Mario Kart 8, and that really puts a damper on the enjoyment of many fans of the series; myself included. There are other small gripes including the way the levels are chosen during online play, but overall, nothing worth mentioning.

On a more positive note, when racing online, lag seems to be virtually nonexistent and the chaos that typically ensues during an intense race is able to do so smoothly. So, if you lose all of your balloons in battle, or can’t quite make it to first in a race, it’s most likely your own doing. Finding a match is both quick and simple and…most importantly…fun! You even have the option to hop online with a second player by your side; as in someone else sitting on your couch can tag along with you. If you’re playing in a private server with a friend, you can talk in between matches using the built-in microphone on the GamePad (though there may be slight audio delay).

When it comes to the audio, by far the best aspect within the game is the musical score. Truly, the instrumentals that play while all of the action takes place on screen really helps add character and liveliness to an already highly animated and fun-filled title. This is especially true when dealing with the “retro” courses as the revamped and newly orchestrated renditions of some of the older classic courses are music to the ears (no pun intended)! As far as the general sound effects go, many of the classic bits of audio that fans of the franchise know and love make a comeback with the addition of some new ones. The dreaded whistling of turtle shells being fired and heading toward you still have their familiar and haunting tone. Character’s voices are over the top—in a good way—and are on point in sounding like they would within their own specific games. Overall the sound really accompanies the on-screen action immaculately and one couldn’t ask for much better.

In actuality, the controls are fine provided that you use something other than motion controls. For all intents and purposes of this review, I tried out both and the only reason why I wouldn’t rate this higher is simply due to the fact of the motion controls being temperamental. Many times I would be racing and doing swell, when all of a sudden I find myself falling off the edge of a track because even though I motioned to turn, the sensor wasn’t detecting the proper depth or curvature of my desperate attempts to turn. This experience may vary though depending on where the motion sensor is placed within your home, however in regards to my own personal experiences, I’d have to say this is a bit of an issue. What’s even more amusing, is apparently the developers at Nintendo knew that there would be some minor issues with motion controls, because when playing online, one of the default chat texts is “I’m using tilt controls,” and I highly doubt they intended that to be said for bragging rights.

While certainly this will likely go down as a classic on the console with obvious reasons to keep you coming back for more, there are a few things that could have further cemented the disc within your console. First off, while you can collect coins to unlock various vehicle customizations, aside from that, there aren’t really any other achievements to obtain. Sure, there are stamps you can earn to help add flare to your posts on the Miiverse, and the quick and easy process of unlocking characters is to be expected, but once that’s all said and done, what else is there to do other than…well…race and battle?

Guess what? That’s perfectly alright, because that is what this game is all about any way! The gameplay and magnitude of enjoyment you’ll receive while encountering a heart-pounding battle or race is more than enough to keep you wanting to play over and over again. Throw some friends or family in the mix, and you have got yourself a wonderful party game that everyone will enjoy.