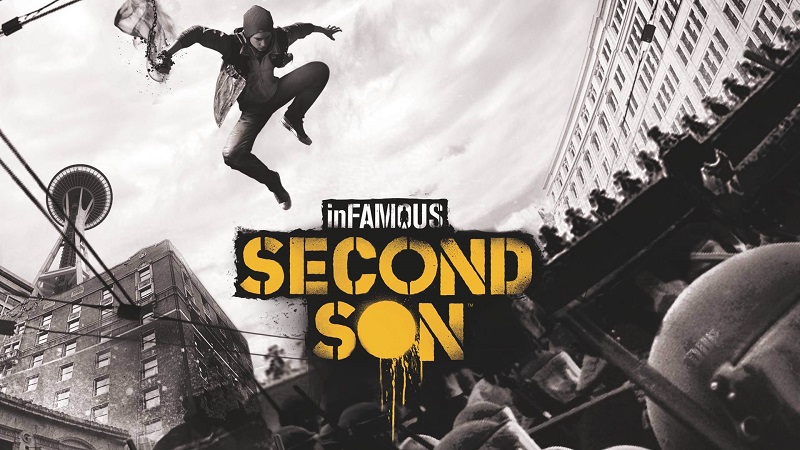 InFamous: Second Son is a flagship title for the PS4. I say that because it’s the PlayStation 4’s first triple-A next-gen experience designed from the ground up to run specifically for the PS4’s hardware. And boy, oh, boy, does it show. The first thing you’re bound to notice is the fact that it’s an absolute feast for the eyes, but seeing as graphics are only a piece of the total package you might find yourself wondering how well the rest of the game holds up. Well, I can tell you to dispose of any reservations you might have, because from start to finish Second Son had me totally engrossed. Delsin Rowe, his brother, Reggie, and the game’s villain, Brooke Augustine are flushed out and feel lifelike, with motives that are more than surface deep. The longer I played, the stronger my attachment became, making for some seriously tough choices during the latter end of the game’s storyline. 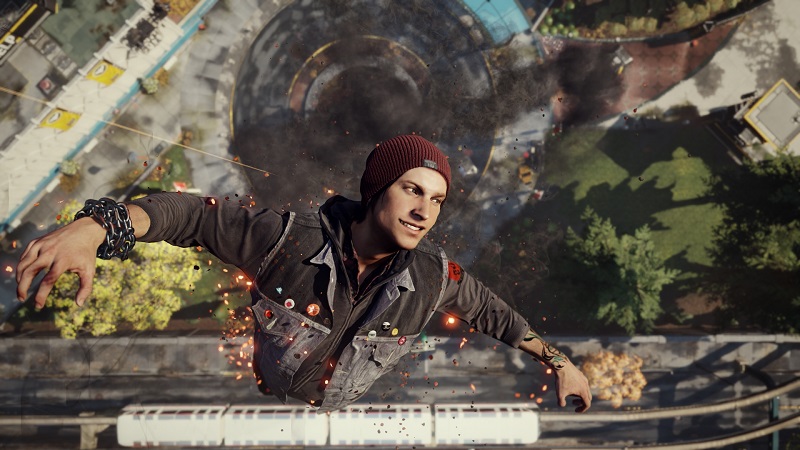 InFamous’ graphics are fantastic, and aside from a few hiccups there wasn’t much that pulled me out of the moment. Clothes are crinkled and blow in the wind, hair moves with ease, and the facial animation is outstanding. In addition to the spectacular motion capturing and character rendering, Seattle itself is beautifully presented, with lighting that reflects different times of day and weather effects that really bring the atmosphere of Washington’s rainy city to life. Buildings look gorgeous from a distance, and when close up the attention to detail is astounding. There’s sheen on the windows, a glow to metal, and brick and mortar looks textured and rough. The game dynamically scales without any loading or texture pop-ups that I noticed, which is surprising, especially when you consider just how quickly some of the powers will allow you to traverse the map.

Seattle’s open world looks astounding but it still feels like it’s filled with cardboard cutouts of programmed people offering up the same quips as I bounded through the city. I expected more in this regard, and considering how well Second Son manages to capture Seattle almost photo-realistically it was quite jarring to hear crowds react in ways that seem jagged and sometimes uncalled for. I wanted to see some sort of dynamic crowd reaction, but regardless of what I was doing, even if it was something small like simply running past a group of people on foot, it would warrant an overreaction that just didn’t fit the scenario. There was also limited variation in the way people were generated, and I would often run into groups of people wearing the same clothing or sporting the same hairstyles, especially when dealing with tight clusters. This problem was made even more apparent in a particular mission type called secret agent, where I would often have to hunt down a similar looking person, over and over again.

Overall though, the game single-handedly managed to put any doubts I had about the PS4’s rendering capabilities to rest. One thing is certain: it’s a beautiful new dawn for the graphical age, folks. If games are already looking this good on the PlayStation 4 my mouth is watering at the thought of how great they’ll look when developers become more comfortable with the console itself 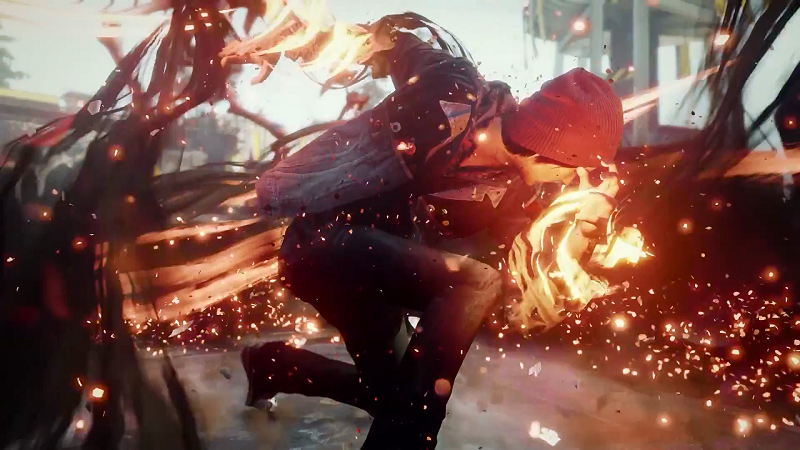 As someone who has played both the first and second InFamous games on PS3, I must say that the series’ latest addition offered up some of the toughest choices I’ve had to make. My actions really felt like they had consequences, lending a certain gravity to this entry that the other two just didn’t have. The game’s themes were surprisingly mature, and I loved the new direction that the team over at Sucker Punch took, pulling the game from its comic book roots and delivering a more conscious storyline that fed into real world current events and insecurities, focusing intently on terrorism, governmental boundaries and violations of basic human rights – think Patriot Act. Missions feed directly into the storyline, which has Delsin dismantling a government organization called the D.U.P. (Department of Unified Protection), which is dedicated to detaining or killing conduits (the people who have developed powers), and has officially rebranded them as bio-terrorists.

The story ebbs and flows, offering up moments of true genius while falling just short of reaching the prize in other moments. I don’t want to go into too much detail in an effort to hold back on spoilers, but as a whole I enjoyed it and I am looking forward to finishing my second play through in the coming days. Missions are varied and for the most part they’re relatively fun. Side missions are divided up by district and offer players an opportunity to free parts of Seattle from the D.U.P.’s oppression. Depending on whether or not you’re going for a hero or villain role citizens of Seattle will view this differently and either usher you in as a savior or shun you as a rogue vigilante. The city has a way of constantly reassuring you for doing the right things or berating you for doing wrong, but regardless of your play style you’re bound to have fun.

Side characters unfortunately fall a bit flat in the development department. Over the course of the game you’ll meet an interesting cast of other conduits that will contribute to your fight. They’re yours to mold as well and they’ll learn from your actions which is a nifty addition, but, as interesting as these characters are they never really get flushed out during the course of the game. They all have some cool backstories, but are never really given the opportunity to see much development and tend to disappear for large sections of the game. I hope they are included in the next title and that there’s more of a dynamic between them and Delsin because I missed the banter and character evolution that took place between Cole and Zeke in the previous titles.

Main story missions are a blast and have you traveling all over the city to take on overwhelming odds. Side missions are varied enough, but sometimes they can become tedious, especially if you’re a completionist like myself that won’t stop until the entire city is liberated. The different mission types will have you pursuing informant audio logs, chasing secret agents, destroying hidden cameras, and spray painting walls in the ultimate act of defiance. Tagging walls is by far the most fun, though. It takes the new PlayStation controller and makes use of its light bar, even forcing you to shake the controller like it’s a paint can. It’s a tad gimmicky, but to be honest it makes perfect use of the controller and all its functions. Dynamic missions exist in the world as well, and are highlighted in red or blue to signify whether or not they’ll earn you good or bad karma. These missions are quick, and don’t offer any break to the fluidity of exploration which makes them easy to get in and out of for bursts of karmic goodness. 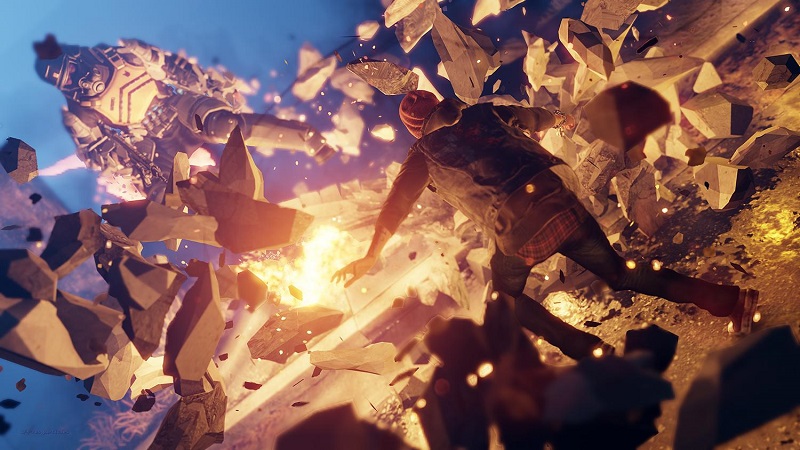 I’ve discussed the story, missions and graphics, now, how about those powers? In short, they’re awesome. They offer up a modern take on the elemental chain, borrowing inspiration from things that the today’s world takes for granted. It’s a nice break from the recycled idea of manipulating standard elements like ice, fire, and electricity, and offers up a unique experience that compliments the newly grounded approach to the series. There are of course similarities between all of the powers you gain and how they operate, but each one has a system of pluses and minuses that make them better in certain scenarios. I don’t want to spoil any of these for you, so I won’t discuss them in depth, but you can be comfortable knowing that they feel powerful and, above all, are incredibly creative. Sucker Punch really nailed it in this regard.

Control is near perfect. Running around the city with Delsin is a breeze, combat is varied and rewarding, and transitioning between powers is as easy as draining the necessary sources. Interactions with certain objects require touchpad controls which I feared would be nothing more than a gimmick, but upon use I quickly found that this was much more intuitive than button mashing during quick time events that so many gamers grew used to over the last console generation, and I actually think I favor using the touchpad now. It just feels right.

My one qualm with the controls, isn’t necessarily an issue with control as much as it with game design. Delsin’s a bit too grip happy when it comes to finding grabbing onto ledges, rafters, and the sides of buildings. This problem is particularly bad when trying to descend from the top of a building to a specific point, which really only took place when I was pursuing the blast shards that are scattered throughout the game. Because of their specific locations precision is required to reach them, and that’s when this problem, which I’ve dubbed as ‘sticky Delsin’, reared its ugly head. It’s a small problem when looking at the grand scheme of the game, but it’s an irritating one that had me quite frustrated at certain points.

In the end InFamous: Second Son is a game worthy of the InFamous name. It lives up to the hype and delivers a darker, more potent story, even if it does manage to trip a few times along the way. Sucker Punch should be proud of their accomplishments with the game, and you should do yourself a favor and check it out. If this game is setting the standard for what’s to come then the PlayStation 4 has a bright future ahead of itself.