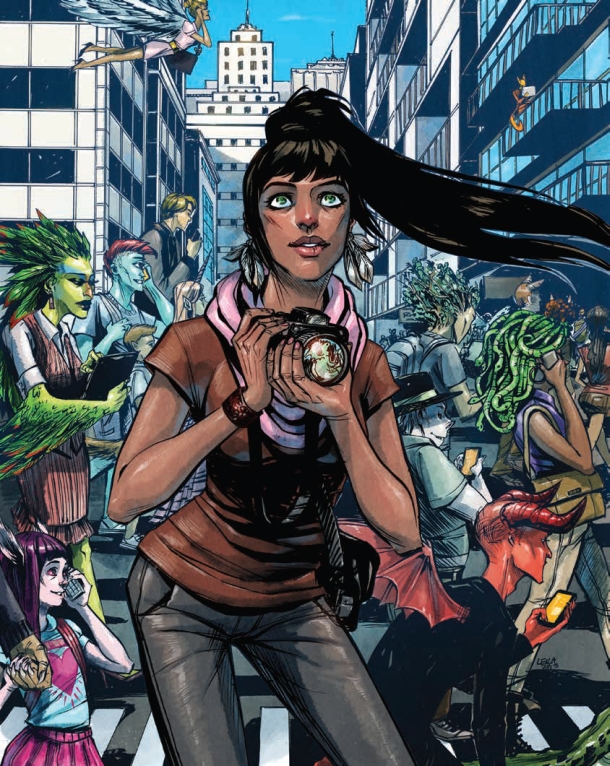 The first issue in a comic book series is the most important.

Yes, character development. Yes, intricate storylines. Yes, artwork that continues to amaze. Those are all important things that don’t happen in the first issue because you need time to develop, to grow and to continue.

The first issue has nothing to build on, so it has to be the issue that builds. Well, in this case something to ‘develop’ on because…. puns!

Which is why you need to get your face into Shutter like it’s a chocolate cake filled with awesome sauce. Because that’s what’s happening right now.

Without reading more than the first 4 pages, I knew this would be a comic I’d be reviewing. Not because I cared about the characters, or cared for the artwork, or even because I knew what was going. But because of the pictures in the background.

I love a good subtext and Shutter has subtext.

Usually, the writing has to grab me or I’m out. But in this case, it was the beautiful artwork and colouring that was happening in the background (courtesy of artist Leila Del Duca and colourist Owen Gieni). It was purposefully put there, it’s obviously not a whim that you have a portrait of a steampunk looking lady holding a trident. And who isn’t won over by a lady with a trident? No one. And if they are, unfriend them. You don’t need that kind of negativity in your life.

So, that’s what hooked me.

But these kids working on Shutter are more than a one trick unicorn. They are unicorns of many wonderous tricks and awesomeness. They’ve created a world that looks like it’s set in a geek convention, except the Cosplayers are the real deal. And some have scales. It’s centered around Kate Kristopher, a lady with a huge fan base and apparently some great photography skills.

The writing, by Joe Keatinge, is fluid. He writes for the specific character he’s created, he uses their words, instead of just shoving words into their mouths (or speech bubbles). He also leaves it up to Del Duca and Gieni to create the world around the star of the show, Kate Kristopher. Yes, there’s a mention or two of some pretty weird stuff that’s going on, but he doesn’t bother with an explanation of the world. You just have to take it on it’s face value, that they have dragons instead of pigeons and that griffons exist.

An explanation of what is going on and why there are dragons roosting on rooftops may come in the future. But for a first issue to not just suddenly give context, but instead ask you to accept that this is the world you’re in now, is refreshing.

Visually, Del Duca and Gieni have made her stunning (I have a thing for eyes and there’s something about the way the eyes are drawn in this issue that make me want to squeal. In fact, I did). As a character, Keatinge has already made sure we know she’s not a cookie cutout; she’s not come from an assembly line of pre-made and manufactured ‘Independant And Sassy’ characters. She has depth and internal conflict, which is something comic book fans love or else Batman, Superman and Spiderman wouldn’t be so popular.

OH and the lettering is really clever. Ed Brisson puts his own mark on this, just by the way he writes the words. It’s a small detail, but one that is incredibly helpful when it comes to creating the world and keeping the reader in it.