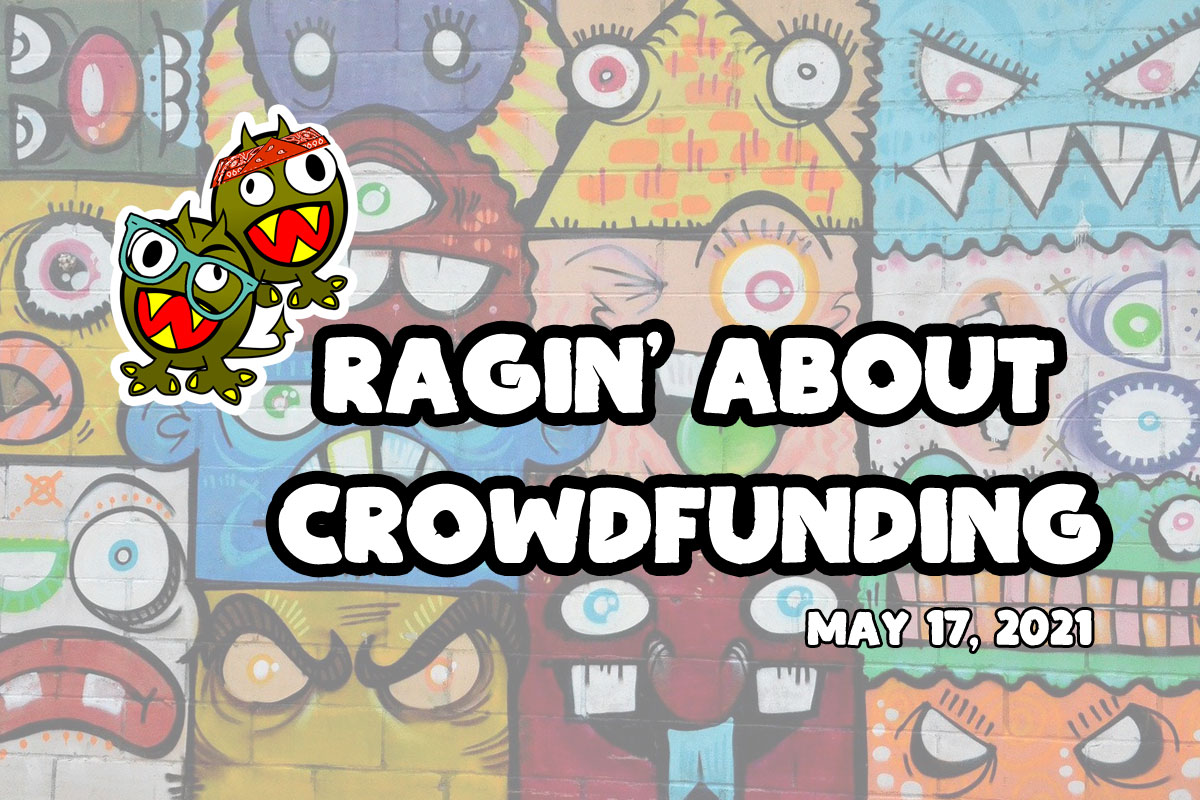 Welcome to the premiere article series which highlights crowdfunding campaigns ending in the near future. Meredith Loughran and Nita Lanning curate the projects that catch their RAGIN’ attention.

The epic conclusion to the most talked about story arc from Unhinged Entertainment!

ABSOLUTE. book 2 is a minimum 46 page story that ends the arc of the battle for the planet! Our heroes are beaten and torn to their bitter limits and their might tested as they rebel against the sadistic totalitarian rule of the Onvi rulers. Back the exciting conclusion that tests our crusader’s resolve, courage, trust, and will!

Agendas are exposed and secrets revealed. More action and story to wrap up this exciting arc and adventure that thrilled us and introduced us to an unlikely group of heroes.

LOVECRAFT P.I. THE CURIOUS CASE  OF ReANIMATOR is a (114) page graphic novel. Taken from the Case File’s of Detective Ward Lovecraft, from The Miskatonic Supernatural Detective Agency. Here we follow our favorite chain smoking, lantern-jawed detective to 1932 New Orleans. On the hunt for a mysterious ritualistic cult, trying to raise the mighty CTHULHU!

LOVECRAFT P.I. is a story that re-envisions the macabre worlds of H.P. Lovecraft while mashing them together with the hard-boiled detective novels from the 1920s-1930s. In this world ‘Ward’ Lovecraft is a Paranormal Investigator with the Miskatonic Detective Agency, an unsentimental and stubborn man who is short on temperament and long on occult knowledge. Currently, there are only two volumes available alongside the NOIR EDITION. A SHOT IN THE DARK vol1 and THE CURIOUS CASE OF ReANIMATOR vol2 in color. Which are available on this campaign.

A 70-page original graphic novel from writer Dave Ebersole and artist Vinnie Rico about an infamous robber meeting the love of his life on his final heist.

TOMMY DAKOTA: Infamous robber, renowned desperado, and legendary outlaw. Society shunned him years ago, so Tomas De Santos changed his name, joined the military, and hid his passions to be just like everyone else. When that wasn’t enough, this queer Latino threw away a life of service for a life of crime.

If this world wouldn’t take him, he would take what he wanted. Since then, the thrill of the heist and the promise of the payoff are all he’s needed…until he met Jep Walker.

Comet, her superhero mom, her dad, and her best friend return for issue #2. If you’re new, you can catch up with issue #1, too! Glamorella’s Daughter, the story of the brilliant neuro-diverse girl with a superhero for a mom, and their adventures trying to understand one another, is back for a new chapter!

Glamorella’s Daughter is published by Literati Press Comics & Novels, a creators’ publishing company that offers mentorship, support, and representation for dynamic and unique voices. Literati Press prides itself in advocating for promising projects that are captivating and commercially viable; advancing Oklahoma storytelling; and printing locally and offsetting the carbon footprint of its comics to help mitigate climate change. For further information visit www.literatipressok.com

Kaidro the webcomic. Ava, a young woman plagued by mysteries of her past from another reality must discover her truth to save her world.

Episode 1 of Kaidro is filled with a diverse cast and friendships new and old that will form under dire circumstances. The large full pages will allow for the expressions and emotions of the characters to shine through.

The chance to get your own PHYSICAL copy of the Kaidro Chronicle manga book 1 is now available! If you haven’t had a chance to read it yet, you can read the entire episode 1 in Webtoons format here: Kaidro The Awakening!

The charm about this physical manga is that it is formatted in a way that has not been seen online! You also get a chance to receive a poster, art book, enamel pins, shirt and to even be drawn in to the upcoming Kaidro manga 2!

Podcasters vs the Supernatural – Catch The Crazees #3

Catch the Crazees is a semi biographical story about two friends turn podcasters who make a deal with something supernatural to become the most popular podcast in the world! But what happens next is worth sticking around for.

Issue #3 has arrived. This 24 page comic book will be released in full color. The funds raised will help pay for the artist and the printing costs. We will also use the funds for the fun rewards we have planned which include, stickers, sketch covers of the book and more!

After Sam goes into the woods to summon the help of the universe, he encounters a very interesting and odd character. What he doesn’t realize, is that this “character”, comes with baggage. The baggage in question comes in the form of little creatures who are just a little bit crazee!

Eleven-year-old Divinity Gray’s life changes forever after the  suspicious death of her parents. Marine Sgt Zach Gray, the older  brother she barely knows, becomes her  guardian, but when he discovers  Divinity’s mysterious healing powers,  their lives take a dangerous  turn. With the help of a few friends, Zach  and Divinity must go on the  run to keep Divinity-and her powers-out of  the hands of an evil  cabal.

Steam Patriots is the story of Felix Ward,  a young colonial Mechanician’s Apprentice with an unmatched memory for details set in the American Revolution.

As British troops storm ashore, Felix discovers information that could change the balance of  power in America’s war for independence. The  entire world changed when Ben Franklin refined the steam engine and  ushered in a technological revolution. Now Felix’s world is thrown  upside down as he’s swept into war and must evade the British  juggernaut to help the cause for freedom.

An angel is unjustly banished to the mortal realm & struggles to survive among Demons & Sinners!

Ever feel like the Gods are playing with you? Like you’re a pawn in a cosmic game? Well, that’s what happens to Mychal the Bloodwing Angel!

Transformed into both female and male form, Mychal is unjustly banished to the mortal realm and struggles to survive amongst demons and living dead! Along the way, Mychal becomes the guardian angel to a neighborhood filled with killers and sinners.

An adults only horror thriller graphic novel in the style of Eyes Wide Shut meets Saw.

Chasity and Zack live a life that some people would only dream of,  expensive vacations, lavish homes, cars and more, but they also have a secret.  Loyal and faithful Zack accepts and begrudgingly supports Chasity’s promiscuity and lifestyle choices, including her recent obsession with earning an invitation to LURE, a exclusive invite-only event for those involved in the partner-swapping lifestyle.

But are they truly ready to learn the TRUE and horrifying cost of being there?

Lure is an 80-page graphic novel that is full of suspense, drama, and frightening situations, that will stay with readers long after the story is over.